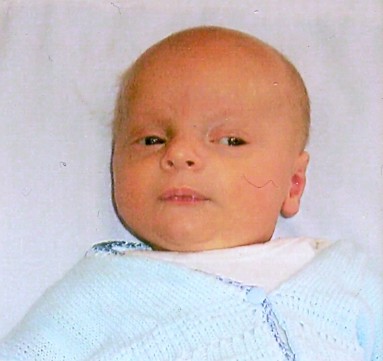 We had Joni’s photos done for his UK passport so we can take him to meet the family next year. Passport photo rules say he has to have his eyes open, so we had to do mean things to him in the shop to wake him up, gathering ourselves an audience in the process. Then the rules say that no-one else has to be visible, so we were trying to contort the pair of us so that we could hold him up to the background cloth without being seen, only of course he can’t hold his own head up yet so it didn’t work too well. Eventually we took the background cloth thing off its runners and laid it on the counter, and put the baby on top of it, and then the guy taking the photo stood on a stool and looked down on his face.
Hopefully it will good enough for the passport people, although to be honest it all seems like rather a waste of hassle given that within a few weeks he won’t look anything like his passport anyway. Our friend Ben says “it would be more of a worry if it did (look like him); how many people do you know who look like their passport photo?” Still we provided some amusement for the general public of Cordoba; service to the community and all that. Next job is to take all the paper-work to the British consulate in Buenos Aires, and see if we can swop it for a passport.

On a different tack, we have solved the mystery of Joni’s missing red blood cells that I mentioned a couple of blogs ago. They tested all three of us for a bunch of possibilities, and discovered that both Martin and Joni have pherocytosis (it’s ferocitosis in Spanish, took me ages to figure out why I wasn’t getting any hits in English… stupid spelling). In the sort of terminology that I can understand, it is a hereditary condition characterised by a defect in the wall of some red blood cells causing them to be sphere shaped rather than egg-timer shaped, and therefore less elastic and more easily broken. There are some potential complications in a small percentage of cases, but the doctor says that more often than not, the first a person knows about it is when their offspring shows up as being anaemic; as with Martin and Joni.

The Hospital Privado, not being enormous, has a combined hematology and oncology department. There can be fewer things more symptomatic of the injustice of this world than the sight of little kids having chemo. We are really grateful that while our kid may not yet have hair, he is healthy, chubby and currently asleep.