I spent last weekend on Scout camp in Devoto, one of the first villages out of here.  It was hot and exhausting, but good fortune smiled upon me and some of the things I normally fill my life with have been cancelled or postponed for this week.  Thus I formulated a grand plan to catch up with a whole lot of admin which I normally never get round to.  I’m happy to report that so far I’ve found a whole lot of other things to do and have mostly managed to avoid the admin.

This morning I took a rucksack into the repair place to be fixed.  I spent a little while hunting for my other rucksack to decant my stuff into, but having not found it, I grabbed a shopping bag and made do with that instead.  When I arrived at the repair place, the lady said, “oh I wondered if you’d forgotten the rucksack you left here a couple of months ago….”  Explains why I couldn’t find it at home then.  Happy reunion, claimed one rucksack, left the lady with the other one, bought some new insoles for my favourite oldest trainers; should be good for another few months before they actually drop apart I reckon.

I’m working towards a little project to make a wheelchair insert using appropriate paper-based technology for one of the kids at the special school.  I’d done a bit of thinking about APT before we ever came to Argentina, but when we arrived, I thought that APT was probably just a bit too “third world” for the needs of folk here.  So I didn’t think about it any more and the book sat on my shelf.  However, the special school here manages to be a convincing model of a third-world enclave in a first world city.  If anything this is even worse than being a third-world institution in a third-world context, because I have a whole bunch of demotivated staff who sit around and talk amongst themselves, and when asked why they don’t do x, y or z, move into bemoaning the lack of resources.  They’ve been trained from a bunch of text-books written by people in contexts where resources are never completely absent.  In general I find Argentina lacks creativity, and this is one environment where it really shows.  So, I have a little task, not only to create something at no cost, but also to model the possibility of creating something at no cost.  And I have a prime candidate; sweet little girl slopped into the most appalling wheelchair ever, who desperately needs an insert made to fit her.  My plan for Wednesday was to measure her, but she didn’t show up at school, so hopefully that’s tomorrow.

I’ve put my cards on the table now as far as the special school is concerned, which I hadn’t quite planned to do at this stage, but circumstances intervened.  The fact is, there is a real lack of educational activity, particularly at the primary end, where the staff quite often spend the afternoons talking among themselves while the kids crawl around the floor.  I had thought if that’s the way it is I need to bide my time and take my opportunities when they arise.  However, the last couple of weeks there has been a supply teacher in, who has worked in other institutions here, and is completely horrified by all the things that I just thought were part of Argentina.  Hence, she’s trying to introduce some changes, and I’ve taken some opportunities to support her.  Which means that if only from purely selfish motives, I’m hoping that between us we can actually achieve something that is recognised as “good” by the rest of the staff, otherwise I’m going to be sat out on a little twig on my own when my partner in crime’s supply period comes to an end. 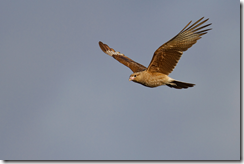 This is a chimango, smallish, brownish bird of prey, pretty common around here.  Joni and I saw one being mobbed by a couple of lapwings one time, and I explained that that would be because the lapwings had a nest and they wouldn’t want the chimango to eat their babies.  This made a big impression on him; for ages every time we saw one, he was say in respectful tones, “chimangos eat babies.“  I was tempted to let him think that I might feed him to a chimango if he doesn’t behave, but in the end conscience prevailed and I had a go at a better explanation.  Hence today when we saw one, he told me “Chimango eats baby birds; sparrows hatch baby pigs in the eggs.“ That’s right Joni, sort of… Chimango with overtones of the three little pigs, intertwined with the sparrows which are once again nesting in our roller blinds; I had to rescue a fluffy chick today which had managed to get itself stuck in the gap between the blind and the dining room wall.

Yesterday afternoon I was out in the village of Quebracho with the kids at my little homework project.  As well as helping with whatever they’re doing at school, I have a selection of vaguely educational activities in my cupboard which they can choose from when they’re done, thus I have introduced them to jigsaw puzzles, colouring books, dot to dots, etc.  mostly gathered from charity shops when we’ve been back in the UK.  I decided a couple of weeks ago that my next plan would be to see what they made of a game, so yesterday I took along a Ludo set.  Some stereotypes make me want to smack the speaker around the head and tell them they haven’t a clue what they’re talking about.  The one about “They’re poor but they’re happy” would be a good case in point.  And yet, seeing those little kids looking like Christmas had come because I’d put a board game on the table… I’m not sure I’d go as far as “they’re poor but they’re happy”, but there’s definitely something about how over-pampering kids sucks out their ability to enjoy small things.  These ones played it and played it till I finally had to throw them out and lock up because I was supposed to be somewhere else.  I’m thinking for my next move I need to track down some dominoes and a “Connect 4” in time for the Christmas holidays.