Sometimes I love the things my kid knows…

Walking the dogs in the early morning sunshine; “Look mummy, an hornero nest”.  An hornero is a little brown bird, quite common round here, which builds a distinctive mud-oven nest, often found on top of telegraph poles: 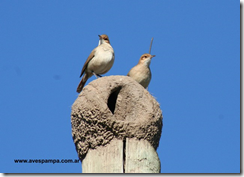 I love that he knows the names of the different species rather than contenting himself with the generic “birdie”, and I also love that he’s enthusiastic about spotting them when we’re out.

This afternoon, when I came in having left Daddy in charge; “Turtles swim in the sea, but tortoises don’t swim”  (Daddy; “sorry, we didn’t get the washing up done, but we had some important research to do on the internet…”  I love the fact that he loves finding things out, and that he wants to share the fruits of his new-found knowledge.

This evening, while we were building with the ubiquitous Lego; “My birthday’s in September.  I’m three, but I’ve got to be four”.  That’s right babe, and you know a lot of stuff for someone who’s three.

Sometimes I also love the things that he doesn’t know… Reading one of his favourite books: 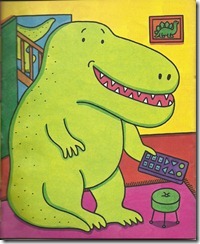 I love the fact that he doesn’t know what a remote control even is, let alone how to operate one.   We’ve never deliberately set out to ensure that he doesn’t know this, nor would we necessarily seek to prevent him from finding out, but I love the fact that he knows where horneros and turtles live before he knows how to flick through the channels.  Is some knowledge worth more than others?  I think so.  Am I an intellectual snob?  Probably.  Is this always a bad thing?  That’s what I’m trying to figure out.  Answers on a postcard.