We held the first Scout overnight event of this academic year, which ended up being a sleepover in our own premises owing to a mix up with campsite bookings.  No-one seemed to mind, and we have a few kids who were sleeping away from home for the first time so that was probably adventure enough.  The Venture section have been working hard over the last few months building us some playground toys in the grounds, so our younger ones made the most of having a whole weekend to fight over enjoy those. 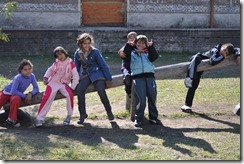 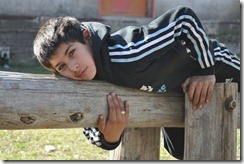 Both my boys went along as mascots;- 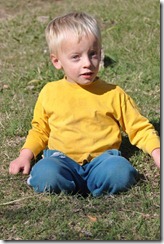 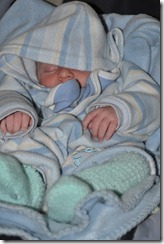 Joni is very clear that he is one of the “big boys”, and I was in severe trouble that I didn’t prepare him a costume to dress up in for the campfire (as is tradition at Scout campfires here).  In my defence he’s never shown any interest in wanting one before and now I know for next time.  Danny spent his first Scout event being passed between juvenile “babysitters” and occasionally finding himself the source of a tug-of-war between same.  The night was flippin’ freezing, especially in our big old barn, but I zipped two sleeping bags together and all three of us got in together.  Joni thought this was a great opportunity to use Mummy as a mattress.  Danny thought he had found a fantastic open-all-hours milk bar.  Mummy was less convinced about either plan, but we all survived sufficiently well to declare the experiment a success… and it’s not as if the Scouts were about to let anyone get any sleep anyway.