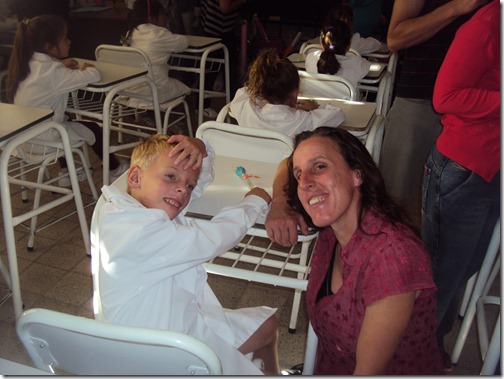 Despite the rattling of sabres and threats of handbags, the academic year did eventually start as scheduled on Wednesday for Joni.  Teachers’ salaries are negotiated at provincial level, and Cordoba was top of the provinces for the highest rise this year.  However, since Buenos Aires was unable to come to an agreement, several other provinces including Cordoba declared a strike in solidarity with their counterparts in the capital.  But, when the moment actually came, many teachers outside Buenos Aires didn’t adhere to the strike so here there was chaos in the city with some schools fully open, other schools fully shut, and some schools operating piecemeal according to whoever did or didn’t turn up, and no-body knowing which camp their own offspring´s establishment was going to fall into until we arrived at the start of the day.  Luckily for us, the “Rio Negro” had come to an internal agreement to open on time with a full contingent of staff.  Wednesday was the flag-waving ceremony “the acto” for the start of the year.  They lined up all the first graders, partnered each one with a sixth grader and paraded them into the front of the assembly, while parents wept and cameras flashed.  It was quite sweet, and I’m sure it does us Brits good to unbend a bit from time to time.

Joni looks mightily grown up in his new primary school uniform, and he is the tallest in his first grade class having shot up over the summer.  I’m going to need a separate budget for trainers and trousers.  Either that or stop feeding him.  The long white lab-coat used to be standard primary school attire throughout the country.  The idea is that it provides a social leveller for significantly cheaper than the cost of a uniform.  These days even many state schools have adopted a uniform as well or instead.  The Rio Negro is a state school, and they use the white coat as compulsory for special occasions, so on Wednesday the place resembled a trainee establishment for miniature medics.  The rest of the year they look fairly normal in blue shorts/trousers and white polo shirts with the school badge.