We spent the weekend making locro.  This is a long process, starting with chopping pumpkin and pigs innards from nine till six on Saturday and starting again at six on Sunday morning to make the fire to cook it all on.  We made two hundred and fifty portions and a healthy profit.

On Sunday evenings at church another girl and I share the kids’ class.  Normally we are relatively organised about who is going to do what – relatively not in the UK sense of having a three month schedule, but in the Argentina sense of having had a conversation by text message at least a few hours before the event.   Since I spent the weekend making locro, we didn’t get to talk, and I assumed she was organising the class.  The bit I didn’t know was that she went away for the weekend and assumed that I was organising it.  If either of us had turned up to church with a working brain cell, we could have exchanged that useful piece of information at the start of the service, but, well, it had been a long weekend, so in the event I had the space of time between the preacher arriving at the lectern and me arriving in the Sunday school area – approximately ten seconds, in order to plan the class.

Take one sheet of scrap paper and cut a capital I shape out of it: 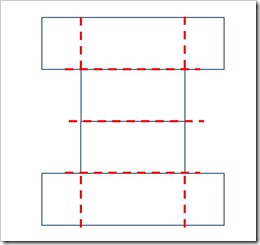 Fold it along the red lines and you will be able to make a house with an apex roof… realise that houses in the ancient near east wouldn’t have had apex roofs and omit the central fold for a house with a flat roof.

Take another sheet of scrap paper and cut it into strips maybe six centimetres width.  Give each child a strip and show them how to make a chain of paper people holding hands:

While they are making theirs, you can make your own set of six people.  Cut one man off the end and make it into a Jesus figure.  Cut another man off and lie him down on a square of paper of approximately the same height.  Turn the other four people into the man’s friends.

Now you have everything you need to play Mark 2.  The kids enjoyed using their chains of people to be the crowd stopping the man and his friends from getting through, and the bit where we cut a hole in the roof of the house and dropped the disabled man through it to land at Jesus’ feet.  In fact they carried on playing with the figures for a goodly while after we’d finished talking about the story.  Danny drew chocolate buttons and chocolate trousers on his – Mark 2 meets the gingerbread man.