I mentioned in our recent newsletter that there are some tensions associated with being English around here at the moment, which elicited some concerned responses, so I thought maybe I should flesh out the bones of that comment a little.

The history of the Falklands-Malvinas is interesting, if complex.  I did some reading around it a few years ago and I keep meaning to write my notes into a coherent article, but it never quite makes the top of the to-do list.  Suffice to say in terms of claims to sovereignty, history neither comes down clearly with Argentina or the UK,  and regarding the present day situation, the UK’s argument re. an existing population sounds suspiciously like “squatters rights”, but equally Argentina’s argument over geography (200 kms versus several thousand) would also have Cuba as the 52nd state of the USA (being an island of a mere 80 kms off the coastline).

So, what is going on at the moment?  Well the issue is hotting up.  As far as I can figure out, nobody on either side of the pond believes that this is going to result in anything more than verbal handbags, but the news has been full of threats and counter-threats.  This is probably due in part to the unfortunate combination of the thirty year anniversary of the 1982 invasion coinciding with president Cristina Kirchner needing to draw attention away from a raft of political difficulties here, and David Cameron being delighted by an opportunity to draw attention away from an economic crisis there.  (In fact quite an uncanny parallel on both sides to the political climate which culminated in war thirty years ago).

As far as we are concerned, we aren’t being spat it in the street, no-one has set our house on fire, and I haven’t heard that any of the British in Argentina are experiencing any overt hostility.  Our friends are still our friends (or they’re too polite to tell us otherwise).  But there are small signs of tension, particularly among strangers; a comment from a waiter that “you people aren’t much liked around here…” (shall I take my custom elsewhere?).  Or when we are asked where we come from and we say England, in less troubled times people respond positively, ask us questions, tell us about their aunt who once went to a conference in Birmingham… but at the moment saying we’re English sometimes results in a long pause while everyone wonders what to say next… I guess like I would if someone had just told me they were the Khmer Rouge.

It is a deeply ingrained issue in the national psyche, as I have been discovering of late while ploughing my way through secondary school textbooks.  Not only does it have a whole article to itself in the Constitution, but it is also covered in history, geography and citizenship in most years throughout the secondary school curriculum.  When I say “covered”, I mean that each subject book for each year contains a paragraph whose content can be summarised as “they’re ours because they’re ours”.  And having now read my way through the entire six years right up to school leaving standard, I can definitively confirm that I have not seen any version where the issue is remotely fleshed out or founded upon any further facts or philosophy.  Faced with such a level of critical discourse, our best course of action in general is to steer well clear, apart from occasionally with a very few friends with whom we are able to engage in a debate over a beer, knowing that we will still be friends at the end of it (mostly my fellow Scout leaders!)

However, the current cranking up of political rhetoric is also producing a phenomenon which we have not previously experienced; voices of dissent from within Argentina.  Clearly nobody but the completely suicidal would go as far as actually questioning sovereignty, but a national newspaper La Nacion (The Nation; I have no idea who is behind this one except that they appear to be the voice of the opposition at least at the moment) has been running a bunch of pretty daring headlines over the last couple of weeks.  Check out…

Keep your head down, and watch this space.

Since the global media has deigned to run an Argentina story not linked to football or those islands, I should briefly say we weren’t in the train or anywhere near it, although Estacion Once was my mainline station for the two years that I lived in Buenos Aires.  But spare a prayer for those who were, and their families and friends.  I suspect the key word will turn out to be underinvestment; by all accounts there has been very little since the railways were renationalised by Peron in the middle of the last century, and a generation of reprivatisation hasn’t made any noticeable difference as the private companies largely make their money from government subsidies.  And of course the stuffed shirts holding the purse strings would be the last to squash themselves into the sweaty cattle-trucks that pass for urban passenger trains.

On a more cheerful note, gifted with two bank holidays next to each other, and sick of the sight of textbooks, we piled ourselves and a tent into the car and disappeared off to Miramar for the long weekend.

Miramar is Argentina’s answer to Clacton; a once-glorious-now-faded-but-lately-rediscovering-itself beach resort.  It is located on the shores of the Mar Chiquita, one of the world’s largest salt lakes, which at 80 kms across might be the sea apart from the water temperature (tepid) and the lack of waves.  It also has such a ridiculously high salt concentration that it is almost impossible to swim; my feet kept floating to the surface(!)  The first hotels appeared in the early 1900’s, when the nearest public transport was to Balneario some 12 kms away; the early hotels used to lay on transport along the then mud-road to Balneario bus station.  In its heyday Miramar had over a hundred hotels catering for every taste and budget, until economic hardship combined with two major floods decimated the town and the tourist industry.   For some forty years, the remnant of the unflooded buildings and their occupants have lain dormant.  I have no idea how people have made their living, but only a couple of years ago we went to visit on a bank holiday and discovered every business in the place well and truly shut, and throngs of potential tourists milling the closed high-street and wondering what they were going to do about lunch.

Thankfully some enlightened soul (change of local government? Enterprising business person?) appears to have realised that the exponential rise in internal tourism in Argentina is there for the taking, and the town came together to organise themselves a crowd-pulling carnival weekend.  Although with our two in tow we didn’t sample much of the night-life, we did enjoy sampling the waterfront eateries and the buzzing atmosphere of people enjoying themselves.

The kids did what kids the world over do at the seaside; the four year old practises principles of civil engineering with a bucket and spade, while the nine-month-old eats the sand.  All good developmental stuff.  We also at Joni’s behest went out on a boat-tour of the lake, ostensibly to see the flamingos, although we’ve seen flamingos at much closer quarters by driving a few kilometres up the shoreline, but the boat was fun and a pleasant angle from which to experience both the lake and Miramar.

The campsite was great, facilities not quite up to the number of people occupying them, but service was friendly, and hopefully some of the profits from this year might find themselves invested for next season and beyond. Our newly replaced tent is smaller, lighter, a sensible design (species of dome), will pitch in ten minutes next time, and more importantly doesn’t collapse when it rains (having well and truly had its first baptism on Monday night).  Many hoorahs.  And so as Clacton and its East Anglian neighbours were to my childhood, to Miramar we shall surely return. 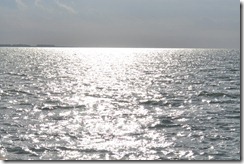 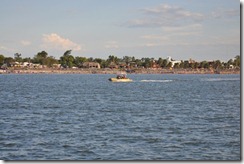 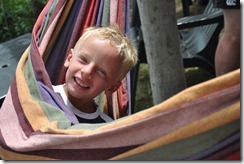 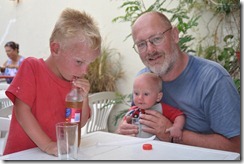 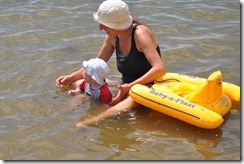 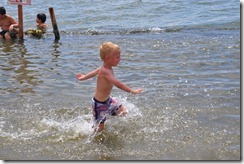