Hello world.  We’re back.  Thank you to everyone who was thinking and praying for us.

The boys did great.  Martin says he would even be happy to repeat the experience at some stage, although probably not next week.  Danny enjoyed going to nursery so much that we´re thinking he might as well carry on going there until the summer holidays start in December.  Joni thoroughly enjoyed having Daddy’s undivided attention all morning, every morning, to the extent that at the moment he’s struggling with the readjustment of having to share with the rest of the family again.

Meanwhile, I had a ball, starting with flying over the Andes which was a first for me.  This through-the-window shot doesn’t begin to do justice to it, but you get the idea; 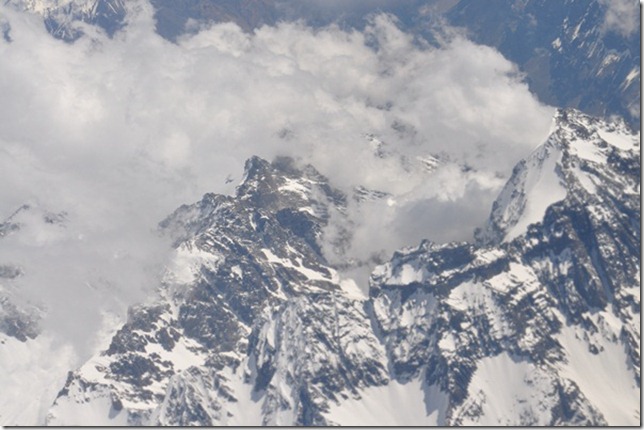 I enjoyed the weekend in Temuco with our Latin Link friends, drinking coffee, chewing the fat, a spot of epic dog-walking, and the confirmation service and subsequent knees-up at the Anglican church.  All highly agreeable.  Followed by an uneventful journey up to Santiago on Monday morning for the conference of the Ecumenical Disability Advocacy Network.

Only in Latin America could we organise a conference for a bunch of people with disabilities and not think to go check the location; with 24 hours to spare, it was discovered to be completely inaccessible.  But only in Latin America could we manage to resolve the situation, in a completely new setting, with all catering and electrics in place as though nothing had ever gone wrong, and still start more or less on time (delayed mainly by the Venezuelan airline which had managed to both lose and break the specialised wheelchair of one of the key delegates.  Ooops.  Luckily, so the Venezuelan contingent informed us, one of Chavez´s main achievements has been that the Venezuelan population know their rights to the extent that they are able to quote chapter and verse of the relevant statutes.  So off went the airline representative to organise the purchase of a replacement wheelchair.)

It was probably the best of the three EDAN events I have been to so far, or maybe I’m just getting the hang of them now.  As with any event, the sessions ranged from interesting to less so, challenging to less so, and relevant to less so.  There were some emotional reunions with old friends; and isn’t it funny how you have to travel half way across the continent in order to catch up with people who only live a couple of hours from home.  And of course many others started the week as strangers and ended it as friends; like the Peruvian member of government proudly displaying her first guide-dog, and the Venezuelan representative of the International association of mouth and foot painting artists who I helped in and out of bed a few times. 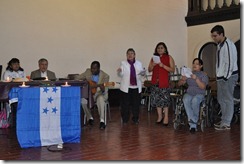 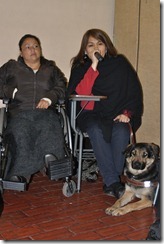 Wednesday was “International evening”.  I’m not a big fan of talent shows, particularly those which aren’t on TV and therefore don’t come with a handy volume control or off-switch.  But when the Argentinean contingent called me to come and sing their national folksongs, my heart leapt with a little pride; my adopted people have adopted me.  And we were great!  We sung a set of traditional numbers, including famous Tango “Caminito”, and the folky “El Arriero”.  (You can find a zillion interpretations of both on YouTube).  The chorus of El Arriero (the mule-driver) goes

The sorrows and the little cows both follow the same path; the sorrows are ours, the cows belong to others.  Which I think is just great, and a wonderful illustration of that British-Argentinean talent for listing our woes, followed by “it could be worse…”  And then just sometimes everything falls into place, and for this one week it seems that the cows might turn out to be ours after all.

“But if God is invisible then people would keep bumping into him”.  Good point.

“Mummy, we have to be civilised” Admittedly I was pretending to beat him with a ping pong bat at the time but I was more than justified:

I was knitting a puppet for someone else, and Joni decided he would like one too.  Make a monkey, he said.  So I knitted a monkey.  At around the 90% mark he said “don’t want a monkey, make a snake instead”.  Redesign the head a bit, line the mouth with red, improvise a forked tongue, sew a couple of red buttons on the eyes, and Bob’s your uncle, or possibly your snake.  It probably wouldn’t feature on the centre-fold of “Good Housekeeping”, but considering it started life as a monkey, I don’t think I’ve done too badly; 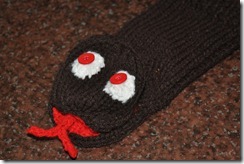 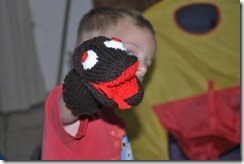 This photo appeared in yesterday’s paper;

which made me realise that I maybe should have been a bit more impressed at having been granted private audiences in the personal offices of some of the figures depicted here.  I guess it’s like a foreigner in England running into George Osborne or something; no good reason to know who this person is or why anyone should be impressed by the encounter (if indeed they should).  We may therefore have reason to hope that having made it this far up the food-chain, my qualifications are at least being given the best possible chance of being recognised by somebody somewhere.

We received a fine for having an unpaid tax on our car from September 2009.  According to my husband’s anal comprehensive filing system, we officially took ownership of our car in August 2009, and we have no record of having received any bills until the 2010 tax bill early in the new year.  So I took the stack along to the tax office this morning.  “Ah we probably wouldn’t have sent you a bill because your address wouldn’t have been in the system at the point where the bill was issued”.  So you’re fining us for a bill from three years ago that we were never sent and couldn’t have possibly known existed since this is a local tax?  “That’s right” she said, without a hint of irony.  I paid it.  What else could I do?

Meanwhile I’m off to Chile in approximately seven hours time, and although I have the power to transform a monkey into a snake, my stuff appears not to have packed itself at my command.  And they say faith moves mountains. 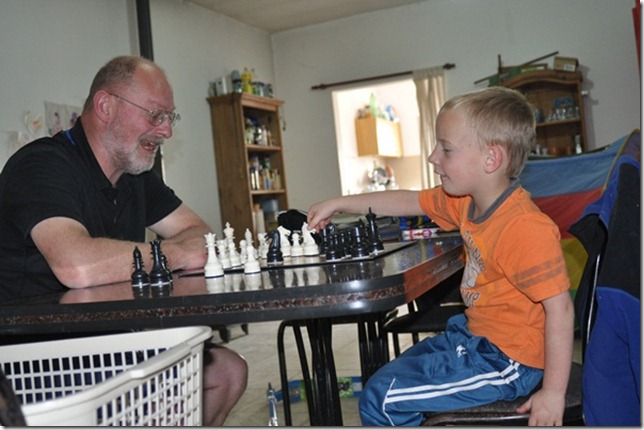 Really we’re just at the stage of “the horsey is called a knight and it moves like this…”, but he’s enjoying himself very much, as well as making for an impressive looking photo.

Hey we’re English, we’re supposed to talk about the weather.  And we’re not the only ones; from the national broadsheet to the local rag, a paper isn’t a paper in Argentina if it doesn’t contain at least an entire page analysing comparative temperature and rainfall from one province to the next.  It’s one of those points of connection between our diverse nations.

So here is yesterday’s weather.  Up in the hills it hails golf-balls on a regular basis, but down in the city this little lot that came down last night was by far the biggest we’ve seen since we’ve been here; 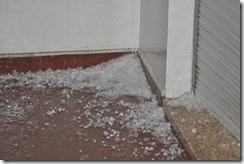 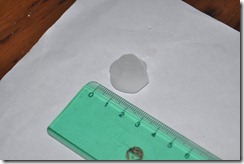 It was pretty loud on those shutters, and luckily the car was safely away in the garage.  And Martin would like you all to know that he took his life in his hands venturing out onto the patio to collect this two-centimetre specimen for your appreciation.