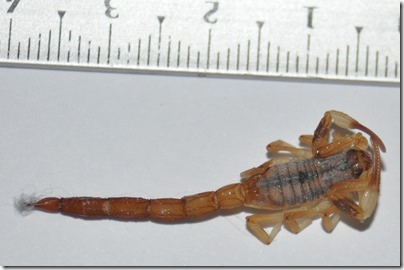 was carefully boxed and placed in the freezer while still alive in order to ensure a clear photo of a genuine scorpion from our very own house.  This one was ambushed while trying to escape out of the office window.  Its cousin/flat-mate was observed emerging from underneath the nappy-changing mat on our bed and swiftly  rendered less than photogenic on the end of Martin’s boot.  We’re hoping that the message has got back to any other friends or relatives that might still be lurking in the shadows.

Where did that baby go? 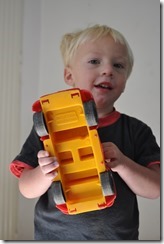 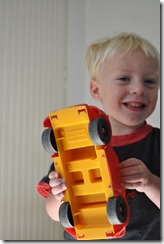 Danny had his third birthday on Saturday.  On one hand it feels like he was only born yesterday, and at the same time we can barely remember life without him.  He had a cake at home with the family, another one at Scouts in the afternoon, and I sent a tractor (“Chrachror”) and trailer cake into nursery with him today.  It might not be Michelangelo, but that was one of my better sculptures, I was very happy with how it turned out and more to the point so was he (Danny that is; Michelangelo didn’t offer an opinion). 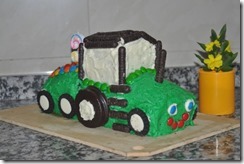 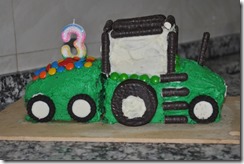 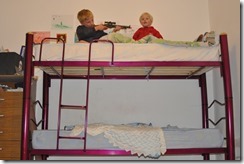 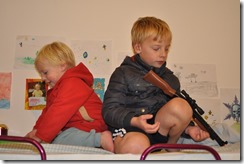 I posted Joni into the top bunk, and Danny into the bottom and said goodnight.  Imagine my consternation a couple of hours later when, on my own way to bed, I looked in on the duo to discover Danny’s bed empty.  A quick check revealed two blonde heads soundly sleeping side by side squashed into the top bed. 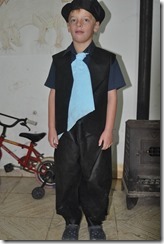 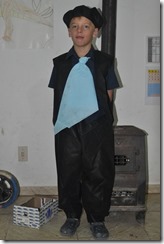 Joni’s school had their acto today to mark the fechas patrias so Joni went off this morning looking disturbing like a child soldier from a paramilitary organisation.  It made a bit more sense in context when he and his cohort performed a primary school-esque version of an Argentinean dance;

The Scouts held a knitathon this weekend to knit squares for blankets to be distributed to worthy causes for the approaching Winter.  Winters in central Argentina aren’t cold like UK cold, but since houses aren’t heated or double glazed I think Winter is far less fun here than it would be in Europe despite being mostly five to ten degrees warmer.

We invited the Scouts to bring their grannies (plus one grandad) along with their needles and spare wool and we all sat round and knitted to a background of live folk music plus regular instalments of coffee and cake.  All in all not a bad way to spend a Sunday afternoon. 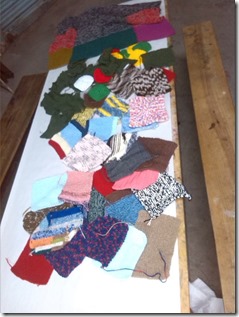 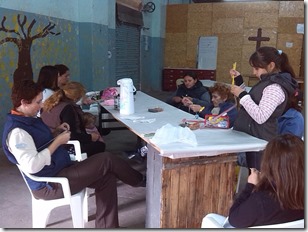 Most people probably think of the marching season as a phenomenon exclusive to Northern Ireland.  The marching in Argentina may be less controversial and better humoured than the flag waving in Norn Irn, but the level of commitment is at least as great.  The “fechas patrias” (national dates) start around now with a gentle lead in for the Dia de Escarapela (Rosette Day) on the 18th of May, followed by the biggie, the anniversary of the Revolucion de Mayo (May Revolution) on the 25th of May, followed by the homage to General Belgrano for the Dia de la Bandera on the 20th of June, and finishing with Independence Day on the 9th of July.  All of which are accompanied by parades, flag waving, ceremonies, speech making, and a celebration of Argentinean customs and traditions, and in particular, locro.

Locro is a winter brew, so we are fortunate that the fechas patrias fall at this time of the year (and having lived through several Argentinean summers I too would have waited till the temperature dropped before donning my battle gear against the Spanish).  Locro is traditional fare across the Andes and the Southern Cone.  It is essentially a thick broth whose ingredients vary according to the local produce of each region.  I loved this quote from this article “As with many popular dishes with traditions that spill over international borders and date back centuries, endless varieties exist. Every region, indeed every home seems to hail their own version as the unrivalled victor of some imaginary global locro cooking competition, with winning family recipes often accredited to a grandma who received instruction that had been passed down for generations.”

In Argentina its chief ingredients of a good locro are white maize, beans and a pumpkin-like vegetable which isn’t squash but you could probably use squash at a push, boiled together for hours and hours, with a sundry assortment of bits of pig and cow innards.  All the recipes that I could find on-line were rather too sanitized, but this one looks like it would result in something more or less recognisable albeit leaving out most of the squidgy bits and using ingredients that you can easily source in Europe.  It would be fair to say that locro doesn’t look too appetising in the preparation stages, and even more so since it is normally cooked in large quantities in a battered but more-or-less-cleanish metal dustbin over a wood fire.  It is also hard work in the initial stages when the animal innards need to be turned inside out and chopped and everything else needs to be chopped into small chips.  But because it requires a team in order to be fun, it is also a great fund-raising activity.  And we love it.  At this time of year we tend to sniff out a locro for lunch on a Sunday, so last week we had one from a church across the city, and this week we have tickets for Joni’s school, and next week we have tickets from another school, and in a couple of Sundays’ time our Scouts will be flogging their annual cauldron’s worth, having first spent most of the Saturday dissecting pumpkin and pigs trotters.

… happened to the last three weeks?

Easter was a challenge to my view of God.  I think that was probably needed.  The rest of life was kind of busy.

Some friends came for lunch on Easter Sunday and we made bagna cauda.  That is one Italian tradition which probably hasn’t made the mainstream of British dining.  It involves lots of cream, garlic and anchovies.  In San Francisco, as a strongly Italian enclave, bagna cauda is almost compulsory Good Friday fare when the entire city stinks of garlic and fish for the day.  So we broke the rules by postponing it till Sunday but it tasted the same and we had fun making it with our friend Joaquin; 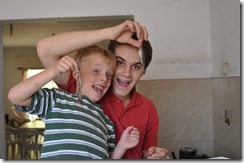 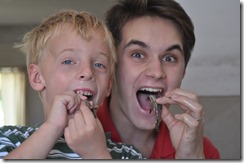 There was supposed to be a Scout training weekend on, but it got cancelled at the last minute.  One of our church-plants however did hold a conference which didn’t get cancelled and I did plenty of floor-sweeping and child-entertaining.  Someone once said “never discuss theology till you’ve worked with someone”.  I cried all the way through the final episode of Rev and not just because it was the final episode.  English teaching goes up and down, sometimes I don’t have enough hours in the day, and other times everyone cancels at once (or just fails to turn up, grrr).  The kids are doing fine, Danny is becoming potty trained and enjoying nursery and swimming lessons.  Joni is enjoying school, and cooking classes (he also loved being Joaquin’s apprentice for the morning when we made the bagna cauda, Joaquin being a cool 18 year old who loves to cook), and he is chuffed to have been moved up a swimming class yesterday.  Our 14 year old periodically makes an appearance, and generally requires very little maintenance as long as she has access to a computer.  She’s with us this weekend.  And there’s a whole bunch of other stuff that I was probably supposed to do and didn’t get round to yet.  But at least I’ve written a blog.