“I’ll ask Daddy…. he knows everything”  Ego boost to the four-year-old’s male parent.

I on the other hand may have indoctrinated him too well;

“Mummy, someone’s dropped a sweet paper on the pavement… the police should come and put them in prison”  I wonder if he’s too young to open a discussion on the pluses and minuses of a totalitarian state.

Me ‘n the Scouts are currently working on a plan for a joint project with the little rural school in Luis Sauce, the hamlet where I go several times a week to extract my young disabled friend.  The school is tiny in both fabric and membership (23 at present) and looks like it hasn’t had a great deal of maintenance within living memory.  The director says that’s because it isn’t widely seen and since all civil service appointments are political, all the money goes to those buildings which are visible by the public in order to maximise photo-opportunities and press coverage, so a hut in a field a long way from anywhere isn’t likely to become anyone’s priority anytime soon.  Hence, the idea is that we hold a Scout camp in the grounds, and the older kids will make themselves useful painting and fixing things, particularly the play equipment, while the younger kids (cub section) will share joint activities, games and the like with the pupils from the school.  At the moment we are holding our breath as the inspector for rural schools has to give permission.  There doesn’t seem to be great rhyme or reason why permission may or may not be granted, and there are apparently no official policies, so we await the whim of the dear inspector.  The current post-holder is rumoured to be particularly conservative when it comes to vetoing school trips and the like, so I’m hoping they’ve had a good day and drunk at least a glass of wine before they get round to reading our project proposal.  I really hope we get the go ahead, but I’m also happy we’ve even reached this point.  Working in partnership, love for ones neighbour, and looking out for folk who society doesn’t particularly notice are all things we’ve tried to model in the last nearly seven years since we’ve been here, and if we’re honest we’ve barely made any inroads into convincing the church that these ideas have any relevance to the gospel they’re preaching, so it’s an encouraging breath of fresh air for me to see the Scouts; kids and leaders alike, rolling their sleeves up and keen to run with a ball I’ve tossed them.

And, something I have yet to understand… Having been initiated into the over-40’s club on my birthday last year, there’s a running joke in Argentina that all women over the age of forty are blonde, which is of course because just about all of them dye their hair.  I have no idea why they go for blonde, frankly it looks pretty silly when they could go for something that far better showcases their dark skin and dark eyes.  In fact even then I’m still searching for a any reason as to why that would be a good idea.  I’m guessing it’s about looking younger.  But why do they want to look younger?  Most of the young people I know are charming and wonderful, but lacking the sort of common sense that only years of life experience can bring.  So why would I want to disguise myself as someone who has even less common sense than I do?  (although it is a moot point; who has the least common sense?  the genuinely young and inexperienced, or those who try to emulate them?)  Needless to say I shall grow old with neither grace nor shame, granting myself the freedom to gobble up samples in shops and run my stick along railings to make up for the sobriety of my youth.  I may even start to wear purple.

Life here’s been somewhat heavy of late with various unexpected twists and turns over the last few days. Most of it’s not our story to tell, which hasn’t stopped us finding ourselves in up to our necks in conflicts and counteraccusations. Tonight peace reigns, although I couldn’t say exactly whether that’s because the storm has passed, or because we’re in the calm of the eye and the worst is yet to come. I’m not sure I have the wisdom or the experience to deal with the meteorites that it appears to amuse the Deity to be throwing our way at the moment.

We figured out how to make custard!  There’s a vanilla pudding mix here in the supermarket masquerading under the name of “flan”, which normally needs to go cold in the fridge for eight hours before it even thinks about thickening, but adding a spoonful of flour before boiling produces something that isn’t quite Ambrosia but more than meets with Joni’s approval.

While we were away, baby food in jars has arrived in our local supermarket.  This seems pretty lunatic because people here by and large know how to cook from raw ingredients and are generally perfectly capable of feeding their kids without resorting to over-processed gloop over-packaged by a multinational company.   Ah but, over on the other side of the world, people in the global north buy fewer jars of baby food than they used to because the market has wised up to the idea that over-processed over-packaged gloop might not be the most nutritious option for a developing infant.  So the multinationals need a new market, and here’s the clever / cynical bit… if the advertising suggests that sophisticated Europeans behave in a certain way, then even normally intelligent Argentineans do seem to fall over themselves to copy it.  So while parents in Europe are abandoning the product, advertising companies will focus on persuading parents in Argentina that the real way to look like a sophisticated European is to behave like a soap-opera character on a sink housing estate.  Will it work?  I would like to hope not, but we have to acknowledge the many advertising campaigns over many years which have successfully persuaded millions of otherwise intelligent people in both Europe and Argentina that the way to express your individuality is to buy the same products as everyone else.  So the nutrition of Argentina’s next generation hangs in the balance.

From the corner grocery store in Argentina to the corner chemist in Letchworth.  I replaced my mooncup while we were in the UK and was disproportionally happy to discover that they’re now available in Boots.  It’s not that I’m a particular fan of Boots, but this is really good news because it means that what was previously considered a mad-hippy-alternative product has been mainstreamed, and we can finally break the taboo and talk about feminine hygiene a mere decade or two behind the should-have-been-parallel discussions about returning to reusable nappies in the baby-care department.  I have been using my previous mooncup-equivalent (different manufacturer) for the last twelve years and it would probably have seen me through except that I’ve given birth twice in the interim, and this is probably as much detail as I can go into on a family show so if you want to know why that’s important do email me off air.  Having reached the age of 40 I’m calculating that model mark 2 should now take me to the end.  Sadly I can’t see reusable sanitary protection taking off in any way ever in Argentina despite everything I’ve just said about the power of advertising to persuade otherwise sensible mothers that what their baby really needs is over-processed gloop in a jar.

To end on a more cheerful note, this is my new toy from the second hand camera stall on Hitchin market (not the walking boot, silly, that’s there for scale): 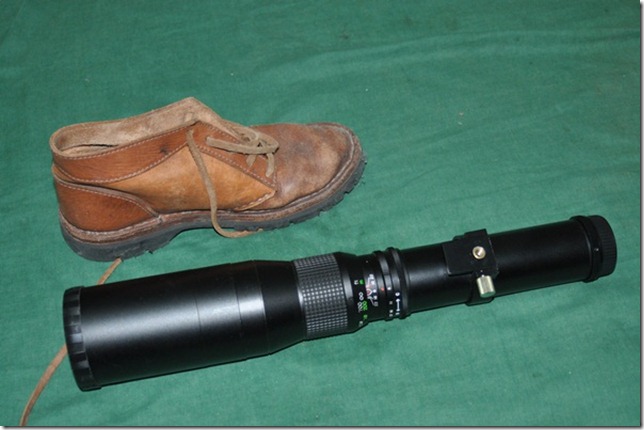 It’s low tech, simple, fixed f8, will only work on manual, but it’s lo-o-o-o-o-o-o-n-g and it only cost thirty quid, and he even threw in a nice condition sony tripod for another tenner.  I’m looking forward to going out to Miramar and testing it on the flamingos sometime soon.  In fact the mental image of photographing flamingos in Miramar combined with a  hummed backdrop of “in Christ alone…” (repetitively and tunelessly, don’t you wish you were here?!) has been keeping me going most of the day today in between dodging meteors in some of the more immediate parts of my life.

In Christ alone my hope is found,
He is my light, my strength, my song;
this Cornerstone, this solid Ground,
firm through the fiercest drought and storm.
What heights of love, what depths of peace,
when fears are stilled, when strivings cease!
My Comforter, my All in All,
here in the love of Christ I stand.

In Christ alone! who took on flesh
Fullness of God in helpless babe!
This gift of love and righteousness
Scorned by the ones he came to save:
Till on that cross as Jesus died,
The wrath of God was satisfied –
For every sin on Him was laid;
Here in the death of Christ I live.

There in the ground His body lay
Light of the world by darkness slain:
Then bursting forth in glorious Day
Up from the grave he rose again!
And as He stands in victory
Sin’s curse has lost its grip on me,
For I am His and He is mine –
Bought with the precious blood of Christ.

No guilt in life, no fear in death,
This is the power of Christ in me;
From life’s first cry to final breath.
Jesus commands my destiny.
No power of hell, no scheme of man,
Can ever pluck me from His hand;
Till He returns or calls me home,
Here in the power of Christ I’ll stand.

We booked an emergency trip to the UK to say goodbye to my Dad, but events overtook us and we travelled knowing that he had already died some sixteen hours before we left home.

As expected it was a time of mixed and sometimes intense emotions.  My brother Iain presided at the funeral, I have put his address up here.  I think I found out more about my Dad in those ten minutes than I had ever gleaned from forty years of knowing him; he was a private person where his own life story was concerned.

But there were also plenty of joys.  In the days before and after the funeral we were blessed with some wonderful quality time with family and friends.  Our smallest boy had his first birthday so we took a selection of cousins to the farm for a picnic:- 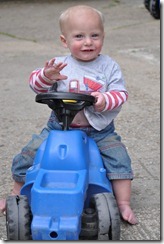 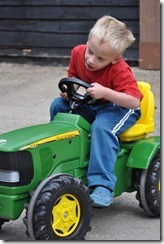 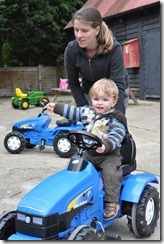 I think I’ve taken a photo of Joni on that tractor every year since he was Danny’s size(!) 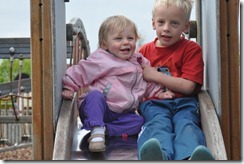 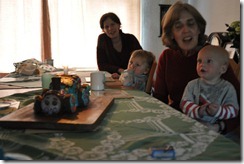 Joni has been gradually working his way through some of my favourite ancient Walt Disney films (they don’t make them like they used to; maybe I’m getting old) and he was overjoyed when TAM airlines took us over central London on the way in to Heathrow; “Look Mummy, there’s the bridge from Peter Pan”.  Full credit to him for his sharp powers of observation.  So we did a day out in London and blew some bubbles on our way across his bridge:- 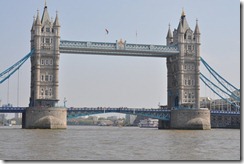 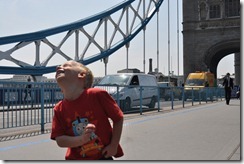 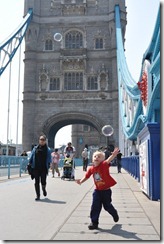 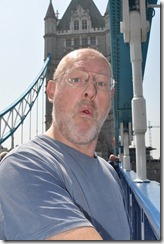 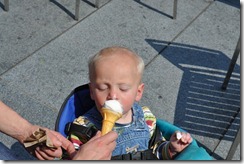 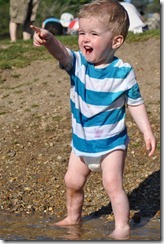 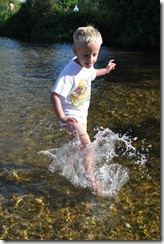 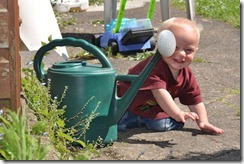 “Mummy, I want to stay and live in England now”

“Okaaaaay…. (back pedalling while we think about how we’re going to handle this one…)  So why’s that, sweetie?”

“Because of the custard”

I’m still trying to come up with an answer to that.