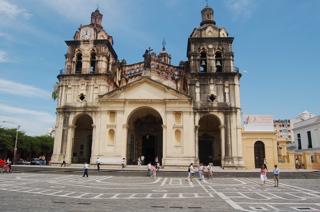 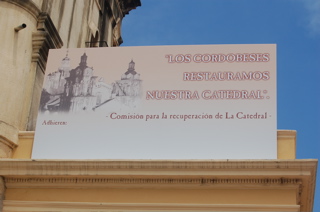 The noticeboard in this photo says “The Cordobans are restoring our own cathedral”. That makes me so happy. Not so much because the cathedral is undergoing a facelift (although it surely needs one), but because of the pride and conciousness behind the words. It makes me happy for the same reasons that I am an avid buyer of street newspapers; “The Big Issue” in the UK, and “La Luciernaga” in Cordoba. It is the difference between the learned helplessness of “I tell you my problem and I wait with my hands open”, and the empowerment in “I have owned my problem and now I am owning my solution”. We have been told that the roots of learned helplessness stem directly from the teaching and behaviour of the Catholic church, which I have no reason to doubt the historical accuracy of this, but today the phenomenon is far more widespread than just the Catholic church. And now we see the Catholic church modeling something completely different. I wonder if it will catch on?

create your own visited countries map

This is a silly game… if you click on this link it will take you to a website where in about ten seconds flat you can create your own map of countries that you have visited: tick the boxes, and the relevant countries will turn red. This looks particularly impressive if you have visited some big countries… stick a toe into China… or like me, into Argentina, Brazil, and the USA and you have a nice lot of red. Unfortunately, small but exotic doesn’t show up too well, so for creating your own virtual empire in red ink you probably want to avoid Fiji, Bermuda or Monaco. Heck, who wants to go there anyway…? Come to Argentina, the people are friendly, the food’s great…

An unmarried pregnant adolescent. One of the most marginalised groups in society, both then and now. Wonder how many churches or Christian Unions would welcome her in today? Amazing to think that God did that on purpose.
We were at the prison yesterday for their Christmas service. It was a good time. Two people commented on Martin’s neck-brace. The first said “How terrible”. The second said “How nice”. The first guy is a pastor, the second guy is a worship leader who is missing a leg, and I’m guessing he knows some things about living with paradoxical realities.

Which transports us from Christmas, through Easter to the Resurrection, and the greatest paradox of all time. “Then I saw a lamb, looking as if it had been slain, standing in the centre of the throne….” (Revelation 5:6)

Have a great Christmas!

Looking back through the last several entries, I realise that I have not written anything about work of late, so I started worrying in case people think we aren’t doing any, so this is a little blog about work.
Last week and this week I have been out at the children’s home in San Marcos. There’s a page about the children’s home on our main site with some pics if you want to find out more. School broke up for the summer holidays, and the plan is that I am going to spend a couple of days a week “catching up” a few of the kids in the home before the start of the next school year. These last two weeks I have been using some new literacy material from Alfalit. Alfalit have a website, at www.alfalit.org (You may find the front page of their website rather patronising, in a “helping the poor helpless” sort of way, but if you get beyond the front page, they are a key organisation in literacy work in Latin America, and their materials are pretty solid.) I have two kids who have never been to school and have no idea what to do with a pen, and another two kids who have missed a lot of school and have some massive gaps. There’s another lad who I’m not quite sure where to start with, but I ought to be gathering up sometime soon, and another girl who hasn’t been picked up yet, but she’s next in line particularly for numeracy.

At the moment I am working with all the kids individually. Initially I tried to do group activities, but their needs are very different, and their concentration is not that good, so they distract each other too much, which means that I’m now teaching them one after the other. This is pretty intense. When I am not teaching, then I spend most of the time outside playing with the kids, or hanging out with the older ones. San Marcos is in a great location, so once a trip, I try and escape for an hour or so and have a walk, which is a joy and delight to be out of the big city and enjoying the hills or the river.

Back in Cordoba, we are visiting in the Hospital Rawson on Thursdays, which I wrote about in a previous blog entry. Today we met some new people, and had some good chats, as well as visiting “old” friends who have been in for a long time. One of my ongoing tasks is to produce some sort of simple gospel presentation in leaflet form which we can use in the hospital, which isn’t in tiny print, doesn’t use unhelpful jargon, and doesn’t use an antiquated version of the Bible. We started by going to the Christian bookshop, but all of their material failed on at least two of the three counts, so the next line was “Hazel, you’re good with a computer…” At the moment what I am working on is an incongruous mix between “Two ways to live” (bland, simplistic, but accessible) and the Nicene Creed (beautiful but completely inaccessible). Trying to reduce the gospel in its entirety onto a folded sheet of A4 in large print has given me a new respect for the writers of both the Nicene Creed and Two ways to live, even though I loathe the triteness of the latter.

At the weekend, we were at Barrio Sacchi on Sunday, and church in the evening. Last Sunday in the afternoon I was doing some preparation for teaching the kids at San Marcos, during which I made the important discovery that the material which my finger is made out of is less robust than the closed cell foam which I was cutting letter shapes out of. In the background, sometimes the foreground, and sometimes blocking out the sun altogether, we are mired in two lots of admin, one with the immigration office, and the other over health insurance, although on the immigration front, we think we might have finally collected enough rubber stamps. We were there on Monday, and they’ve now told us to come back mid January.

Tomorrow we are taking the day off! 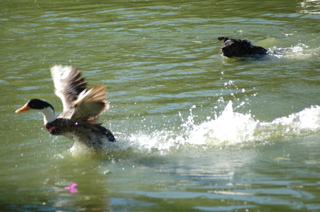 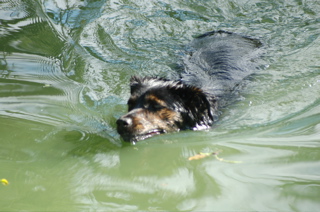 The first time we took our dog to the park, she had never seen ducks before, or water deeper than the puddles in our road when it rains. These days her favourite activity is swimming after the ducks in the pond. She has a lot of stamina as well now. Luckily she never manages to catch any, because when she gets too close, they flap away, filling her face with water in the process. But she never tires of trying. I don’t take her every day, because I think the ducks don’t really enjoy the game as much as she does. Sometimes we go to the other end of the park, to give the pigeons their exercise…
Here’s a thought… Whoever invented the term “doggy position” wasn’t a dog owner. True doggy position is a dog lying on their back, with their legs waving in the air and tongue lolling to one side, waiting for someone to rub their tummy. 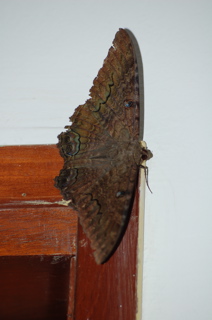 I was cleaning under the bed, (sometimes it happens), and a huge black thing flew out. “Eeeek it’s a bat” I said.
“A rat?” said Martin, mishearing me from the other room.
“Yum, dinner” said the dog, leaping up enthusiastically.

The creature came to rest on the wall, and we realised that it was neither a bat, nor a rat, (nor dinner) but actually a huge moth. It stayed long enough for Martin to measure its wing span; 15 cms, and it didn’t even object when I took photos. When nighttime fell, it took itself off out of the bedroom window.