The electricity went out for seven hours, and it rained all afternoon.  The kids had a lot of fun enjoying the Venice effect on the roads around our house:- 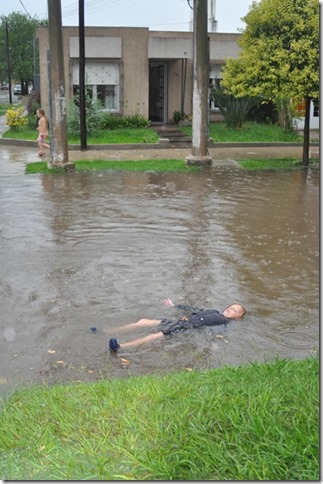 Joni discovered that his puffy jacket makes a great buoyancy aid, and he enjoyed the whole craziness of floating down the road. 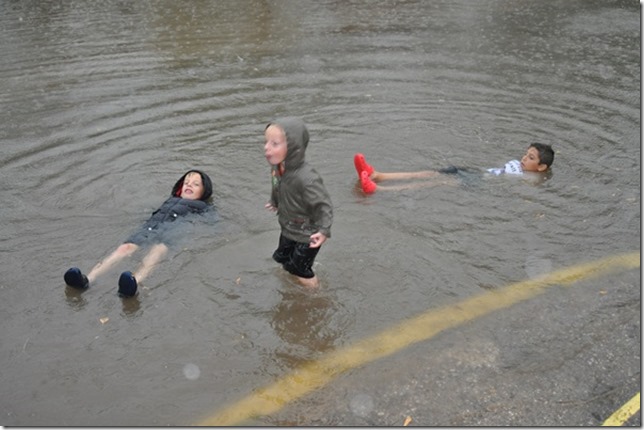 What sort of irresponsible parent would allow these poor kids to play out in the road? 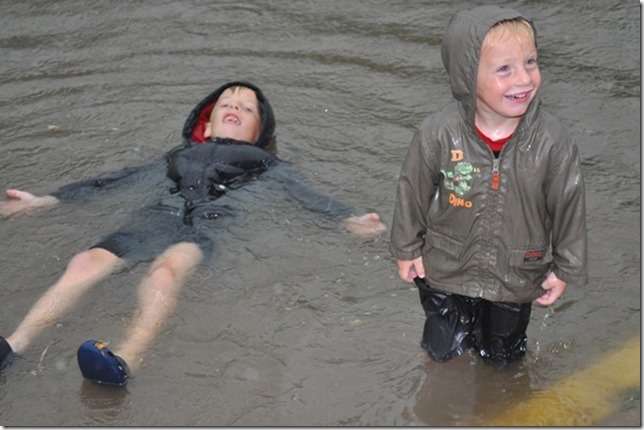 “We made our own fun in them days…”

The police arrived at the door late last night, which was a bit of a shock to the system, unused as we are to parenting teens.  Now I know how our mum used to feel “what have those kids been doing now?!”

The policewoman wasn’t sure she’d come to the right place; “are you responsible for a minor, (name)?”  looking like she fully expected us to say she’d come to the wrong house.  But we admitted that Teen is indeed in our care.  Nothing to worry about, but she’s been knocked off her bike and needs collecting from the hospital.

I went off to the hospital, found her largely undamaged and in the custody of two police officers.  I had to sign their paperwork in order to secure her release.  The police officer said “she told me you were English and I didn’t believe her”.  Teen’s mistake had been to volunteer the information that she normally lives in the teen hostel.  Police had then assumed that she had run away, and therefore anything she said after that was going to be taken as a lie, particularly some ridiculous yarn about living with an English family.  Everyone knows there’s no English in San Francisco…. Sometimes truth is stranger than fiction.

Having secured her release, we drove around and tried to find the bike.  Failed on same, she wasn’t entirely sure exactly where she’d been knocked off.  So we went to nearby friend’s house.  He said bike was in the custody of the police.  San Francisco is really two towns joined together, San Francisco and Frontera.  San Francisco is in Cordoba province, Frontera is in Santa Fe province.  None of the institutions communicate with each other across provincial borders, and the accident had been on the road dividing the two provinces.  So San Francisco police looked after her at the hospital, but Frontera police took the bike back to their station.   Another trip round the city, a bit more paperwork to release the (also undamaged) bicycle and we were all home by one in the morning.  We were greeted at our front door by the director of the teen hostel.  She had been contacted by the police as part of their process of not believing the story of the fictitious English.   Satisfied that “the English” were still as real as when she last saw us, and that Teen was intact and in our care, she went away again.  And we all went to bed.