Summer scheme has ended for 2010. The final event on Friday was billed as an “evaluation session” for the leaders, which looked suspiciously like a water-volleyball match followed by a BBQ. I evaluate that as a worthy waste of a couple of hours, despite completely sunburning my face in the process.
So now I’m in limbo wondering what the rest of the year holds:
Quebracho Herrado is looking positive at least; a couple of the village stalwarts have suggested I should expect to be busy with requests for homework-club support.

Paid work wise, there is a possibility of English teaching; a couple of students came to see us for conversation practise the other day, one of whom reckons he can find us an opening either in the university where he teaches, or in the private institute where he studies. It wouldn’t be my first choice, but it would be foolish not to pursue the opportunity if it exists. The work I’m really looking for would be special needs teaching in a mainstream school, which is a growing area here, a couple of people have said that they could probably find me an opening, but so far nothing has come to light.

Meanwhile, I’m rolling my sleeves up for battle to get our kid from the village into school, be it a special school in San Fran, or the village school in Quebracho. The local governor of Quebracho is the gate-keeper for useful resources, but as far as I can gather only does that which is politically expedient, so I’m hoping to recruit the social worker to my cause, which may or may not happen since hers is a political appointment, made by the aforementioned inanimate object alias the local governor. The system here has to be experienced to be believed.

Our next piece of punctuation is our mission’s conference in Peru coming up next week. We hope to survive it, and then to reward ourselves for not being sacked by taking a couple of days off to see something around the Lima area. I’ve only been to Peru once in 1994, and then we didn’t make it to Lima. Apparently there’s some nature reserves on the coast south out of the city which I’m hoping might be worth a visit. Macchu Picchu is a long way away, and expensive, and our kid is at an age where he’ll almost definitely appreciate a walrus over an inca ruin.

And finally: What would you buy at this hard-ware store? Pink handled drill… chiffron overalls…? 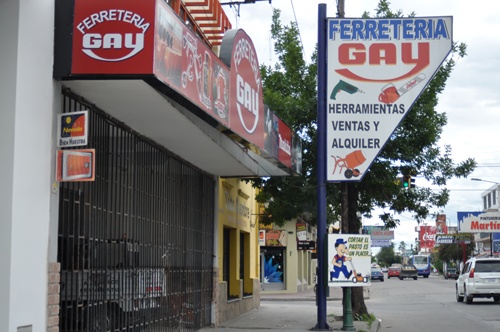 The weather this summer is politely described as challenging (if you want more accurate but less polite listen to Robin Williams giving the weather forecast in Good Morning Vietnam). Imagine a fairly bad UK summer; rains a lot, with sunny-cloudy-might-rain days in between. OK, now imagine that the sunny-cloudy-might-rain days in between average 35 degrees, filled with mozzies, and so humid that you end up wishing it would just break and rain again. Then imagine that when it does rain half the city is underwater, and the unpaved roads (the rest of the city and the surrounding villages) have turned to slurry. All this slightly complicated by the fact that everything is cancelled when it rains.
I am still doing summer scheme for another week. The deal is that if it is actually raining at the scheduled start time of 9 a.m. then there will be no summer scheme for the day. This is complicated further by the fact that I am leaving home at 8.10 to go and collect kiddo from the village, so by 8 a.m I have to have predicted whether it will be raining or not in an hour’s time to know whether it is worth collecting him. He lives 10 km down a main road, and then two kilometres up a dirt track. When it rains the dirt-track becomes unpassable till it dries out again, which can take a day or two. In order to find out whether the road is passable I have to text kiddo’s mother (texting being the main form of communication in Argentina, particularly out in places where fixed-line phone technology was superceded before it ever arrived). The bit outside their small-holding usually dries out first because it has been sanded. The bit that dries out last is furthest away from their house, so she has to make a prediction based on what she can see. She doesn’t drive, they don’t have a car; sometimes her predictions are wildly off-beam.

Friday was one of those “The Clash” days (“Should I stay or should I go….?”) I hovered around and looked at the clouds till as late as I dared. I texted kiddo’s mother. She reckoned the road was OK at least so I decided to risk setting off. As I was leaving the city a couple of spots of rain started to fall. I texted mum again. She reckoned it wasn’t going to come to anything. I texted the person in charge of our group at summer scheme. He was just leaving home and reckoned it would still be happening. I drove the 10 kilometres to the start of the dirt track. Looked ominous, I parked up and got out for the multi-sensory inspection. Finding the road to be as soft as it looked, I decided not to drive through it, and texted mum again. She texted back about whether it was walkable. Meanwhile group-leader’s text interrupted our train of thought letting us know that summer scheme had been cancelled for the day anyway. So that was that. So far this week we’ve achieved summer scheme for both Monday and Tuesday, so it will probably rain tomorrow, (you see if it doesn’t, said Eeyore).

We’re back, both of us. Fantastic week, heat tempered by the surrounding hills, beautiful location just outside San Clemente in the hills on the West of Cordoba province; 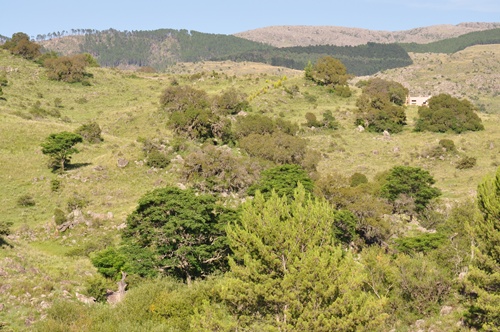 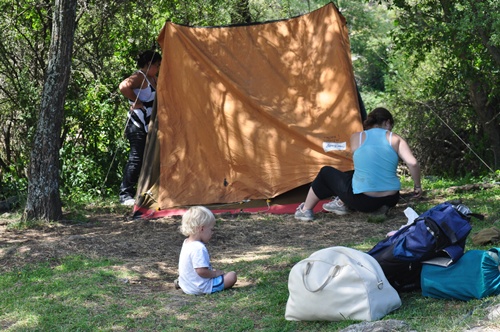 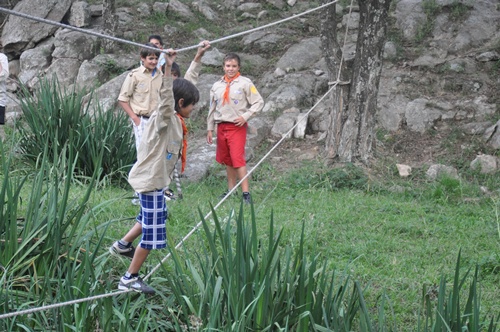 Hearty activities in the open air; 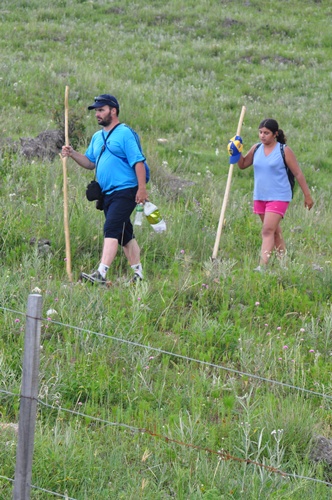 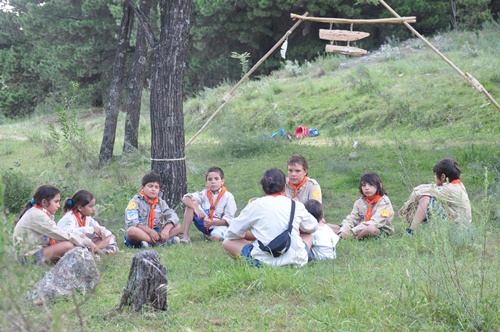 And quite a lot of plain goofing around. Actually I fell off that wall, not my most dignified moment…. 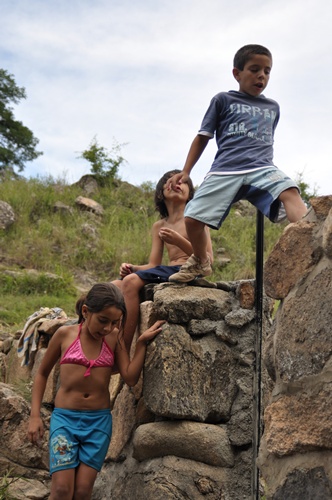 The camp mascots, Joni and Luciano (two week’s difference in age), had a great time;

Bossing around their ever-willing fan club; 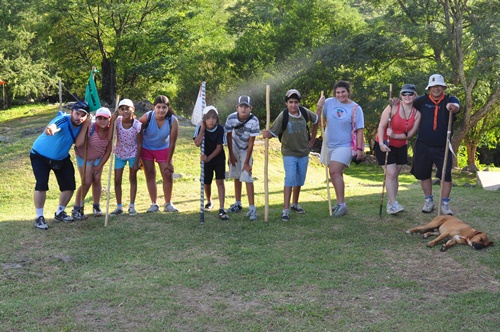