I was cutting the grass, which isn’t my favourite job, partly because the grass cutter is rubbish so I always end up having to take it apart three times and swearing at it, which doesn’t improve its functionality any more than the taking it apart does, but it makes me feel better. Anyway… I was cutting the grass, and I realised that the grass in one small area was longer and lusher and greener than in the rest of the garden, because it was standing in an inch and a half of, let’s call a spade a spade, POO, seeping out of the top of our sceptic tank. There are still areas of San Francisco that aren’t on mains sewage, and even in areas where the sewage system has been put in, it is up to the individual house-owner to organise, and pay for, the connecting up. Hence, many haven’t. Particularly owners who don’t live in the property anyway, like our landlord. He assured us that it wouldn’t be necessary to connect our house to the sewer because our sceptic tank would never fill up. Which now we have actually seen inside the thing, it is difficult to see where he thought the contents would disappear to, given that the tank is concrete. We find there are some quite big cultural differences around what constitutes “telling the truth”; it does still catch us out quite often. Or maybe he just thought that English people don’t poo. Anything is possible. So now we have had our first experience of the poo lorry. Think about the tanker that used to empty the Greenbelt “tardis” portaloos, only bigger, making satisfyingly slurpy noises up a big sucky hose powerful enough to hoover up any wayward children (that’s a cautionary tale in the making). They dug around in the garden a bit and found a small entrance to a big hole, that’s the cess pit I think. It’s called a “pozo negro” in Spanish. That means “black hole”. Fair description. The “black hole” is connected to the big concrete tank which we already knew about, that’s the one that was overflowing in the first place, and the big concrete tank is connected to a second, smaller, concrete tank whose purpose I am unsure about. Dem bones dem bones… Hear the word of the Lord. So now we have the guys’ calling card conveniently attached to our fridge in readiness for next time. And the learning outcomes of this story are: if you want to improve the quality of your lawn, we know a handy source; and “excessive toileting is a sin”.

Copyright notice: these photos aren’t mine; I’m still hatching a plot to replace my camera later on in the year.
These photos were taken by one Megan Ramsey, Scottish lass, who is spending some of her university language year in Cordoba, and came to stay with us for a few days to remember how to speak English and see something else of Argentina. 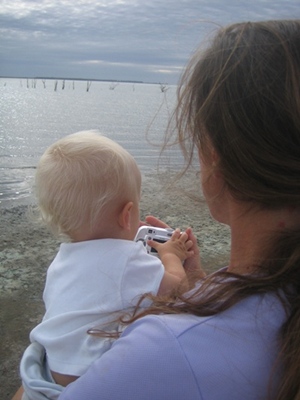 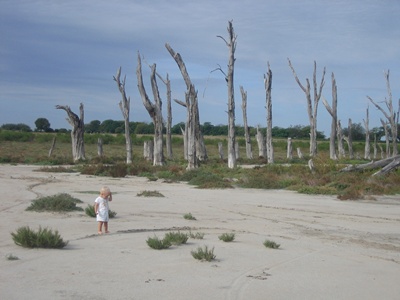 So we took her out to Miramar, a little town of some 1600 inhabitants, on the shore of the Mar Chiquita, (“Little sea”) which is a big salt-lake. 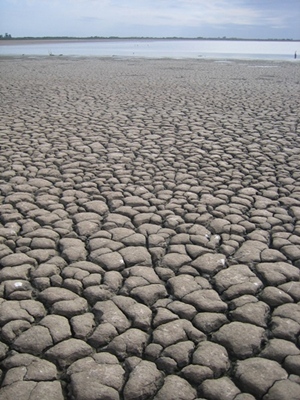 The lake is 115 kilometres long, by 88 kms across, so it does look quite a lot like a sea, as well as being salty. I think it is the fifth largest salt-lake in the world. 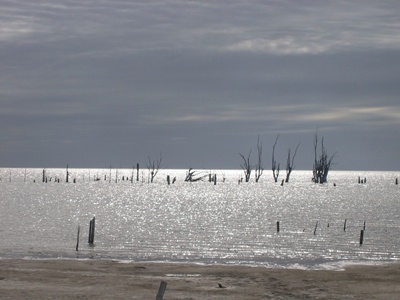 It is home to some 300 species of birds, which is something like a quarter of all the species of birds in Argentina, including three types of flamingo. The flamingos are quite shy so they don’t always stick around to be photographed, but there is one on the right hand side of this photo, pretending to be a stork. 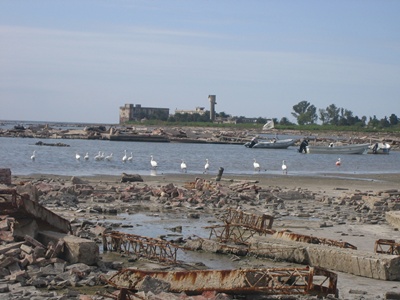 In the back-ground is the imposing bulk of the ruined “Hotel Vienna”, which is a conspiracy theory in the making. It was built with German money during the second world war, as a five-star hotel, totally out of keeping with anything else in the area, it opened in 1945, and closed some fifteen months later, leaving a German scientist as caretaker, who was later found poisoned in the basement. No-one has ever come forward to retrieve the body of said caretaker, or to claim ownership of the building or its contents. It has gradually fallen into decay, until in recent years the local tourist board has recognised an opportunity to capitalise on its mystery, and is now running guided tours every afternoon and selling souvenir T-shirts and postcards from the old foyer. 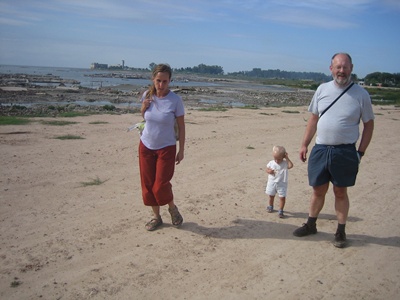 The lake has expanded greatly in recent years. The most famous flood was in 1977, when a large part of old Miramar became submerged, and the army was brought in to blow up some 35 blocks of the town where the buildings had become unstable due to the water. Walking along the shore there are still large areas where flooring and foundations are clearly visible, and swimmers are advised to stick to the marked bathing areas which have been cleared of broken piping and other nasty surprises.

With its ecology, geography, history and tales of intrigue, not to mention the fried “pejerrey” fish sold in the many restaurants along the front, Miramar is a fine place in which to waste a sunny afternoon.

This is a quote from our friend Simon’s blog, which is fairly pertinent to some things that are happening here at the moment…
“Some may rankle at the idea of allowing unfettered discussion of church activity, but we are in a generation which mistrusts authority claims and places a high value on ‘freedom of information.’ While no substitute for peer-to-peer accountability structures, being honest and open with the world at large is not merely important for its own sake, but also helps us to ensure we have no hidden agendas. The Christian message has always been communicated not only through carefully selected and polished words, but also through an open and public witness. Instead, therefore, of giving in to concerns of vetting and message, we should be eagerly looking out for opportunities to live out Acts 20:18 in the information age”.

Question is, how can one work effectively across two cultures, when one culture values, even requires, candour as a sign of credibility, while the other would see anything less than a fully united front as a sign of disloyalty and a breach of trust in relationship?