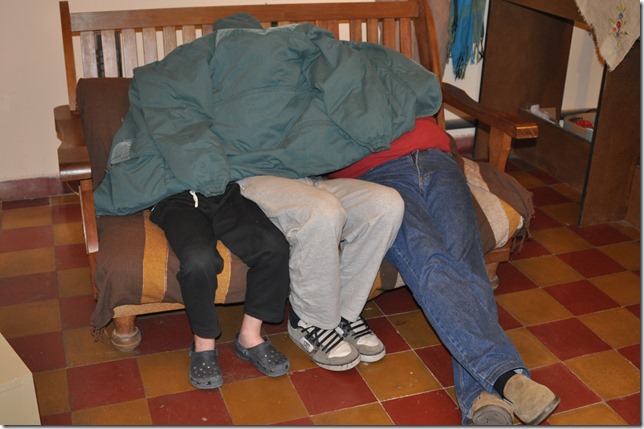 Watching the Argentina – Iran game. At least Argentina are still in the running, but it wasn’t pretty.

1. an incorrect or unsuitable name or term for a person or thing

2. the act of referring to a person by the wrong name

[C15: via Anglo-Norman from Old French mesnommer to misname, from Latin nōmināre to call by name]

For example, to use the phrase “unstructured time” for anything involving small children is a misnomer.  It is commonly used to describe a period of time without an externally imposed schedule.  In practise, the absence of an explicit timetable means that the adult in charge, typically a parent or care-giver, will be continually required to structure, restructure and restructure some more in response to the ever changing needs and desires of the juveniles, and in particular according to the unpredictable likelihood of imminent war-fare.

Here are a couple of gems from yesterday’s (ahem) unstructured periods….

Joni, helping me to restore order in the bedrooms; “there… now that looks all spick and spack”

“Danny if you don’t stop right now, you are going to find yourself in your old cot in the other room.  Is that what you want?”    He:- “I not sure…”