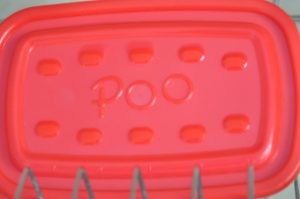 …please little minds, and a set of six brightly coloured food boxes with “poo” embossed on the lids was enough to do it for me.

School has been happening on a regular basis for the last couple of weeks. It appears that even the teachers are finally bored with perennial  industrial action.  Every couple of days the news publishes another date for the next strike, but the number of staff adhering to them appears to be dwindling to none, at least in the state schools in our neck of the woods., for which we are highly grateful.

Baby goes to the municipal nursery, that’s from eight till twelve.  Danny is in first grade of the local primary school.  That’s also from eight till twelve.  Luckily they’re close together and the nursery is fairly tolerant about times for working parents, so I dump Baby off the bike at one, and carry on with Danny to the other.  Joni is in forth grade primary, that’s usually from eight till two unless otherwise informed.  Teen is in forth year secondary.  She starts at twelve thirty on Monday and Thursday, and one fifteen the rest of the week unless otherwise informed, usually finishing at six thirty or thereabouts, but on Wednesday she also has p.e. from seven thirty till eight thirty in the morning.

Factor in to this that the main cooked meal in Argentina is at midday, because food in the evening doesn’t normally happen until nine o’ clock or later.  The nursery feed Baby which is handy, but school doesn’t provide food, so Danny needs feeding when he comes home, Teen needs hers before she goes in, but Joni will come back ravenous for his an hour after Teen started school.  Add in everyone’s homework and yes they all get homework most days (apart from Baby who spends the homework hour pulling things off the table and pushing chairs around).  Scatter through the week a bunch of extracurricular activities, and all of a sudden we have a recipe for chaos, or at least we can start to understand why my sense of humour has descended to the level where bottom jokes are about as sophisticated as I can muster.

January brings the snow,
Makes our feet and fingers glow.

Which doesn’t quite work here in the Southern Hemisphere.  Here, February brought Scout summer camp, where we took the 11-15 age group a kilometre away from running water and electricity and challenged them to get on with it.  Are people even still alloowed to do things like that in the UK?  It was lots of fun, and looked like this… 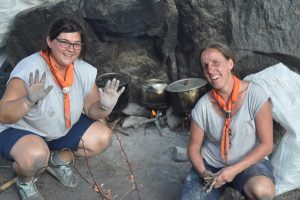 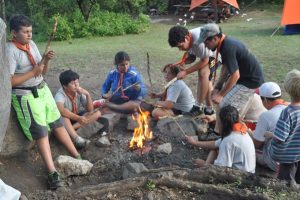 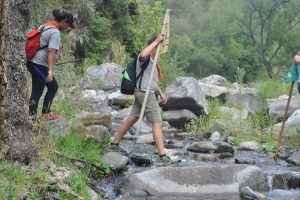 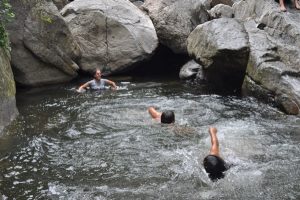 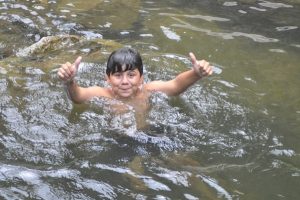 Then we figured to finish the summer holiday with a few days out as a family.  We couldn’t get accommodation anywhere in our favourite destination of Miramar, and then at the last minute the car died, limiting us to somewhere easily available by bus and preferrably without having to lug camping gear.  So we ended up in Arroyito, which is a bit like going on holiday to Bedford or something.  But it has a nice wide shallow river, some good plazas, a better selection of eateries than San Francisco, an old non-functional steam train for the kids to climb over, and we found a sweet little hotel, with a very inviting swimming pool, run by a sweet little elderly Spaniard, and all in all we had a nice relaxing few days. 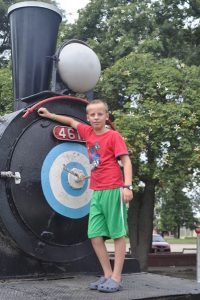 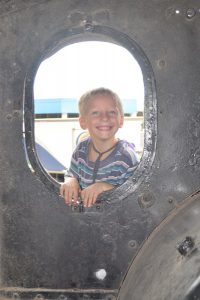 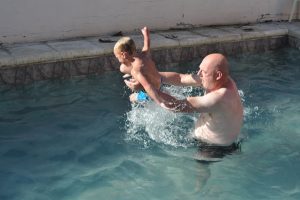 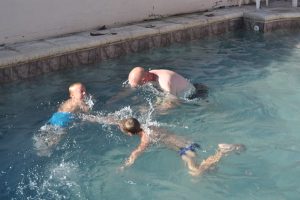 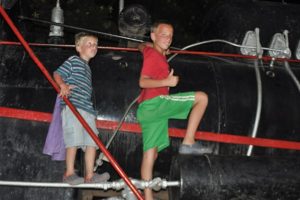 The first of March was supposed to bring the start of the school year, but according to custom, we begin the year with a series of teachers’ strikes.  The dispute will probably drag on for a while yet, but tomorrow we should finally have all four children in their appropriate educational establishments on full timetables at least for a day or two until the next set of strkes is announced.