In France the adage is “I think therefore I am”. In Argentina it’s “I have an ID card therefore I am”. We submitted our application for ID cards a year last May, but the government here has contracted out the service to the lowest bidder, and we all know what that means. There are an unimaginable number of things that one cannot do without an ID number in Argentina, they ask for it every time we try and use a credit card, or make a doctor’s appointment, or fill in any sort of form, or receive any services in our name, or register our child for anything. Passports are just about acceptable, except that the UK passport handily has one digit more than an Argentinean ID card, which either sends computer systems into flat spin, or lops off the end digit, giving us the same “unique” number as some other unknowing Argentinean who clearly isn’t us. Hence it was with great joy this week that we have finally collected our ID cards, known as “DNI” or simply “el documento”.
This week’s tricky question… What does a muslim in Finland do if Ramadam falls in June? I asked Martin, and he said;- “so that’s what your mind is doing when you’re quiet…”, which hardly strikes me as a comprehensive answer. So if anyone out there knows, please share.

I’m working towards my ambition to be an earth mother. We’re making progress, as long as you don’t count the bit where I fed the baby half a packet of cheese flavoured crisps yesterday to keep him quiet while I chopped the salad up. I’m enjoying having my own cooker again, tried out a new recipe for hummous this week, tasted great, we introduced it to some Argentinean friends last night, very successful. We also squeeze our own orange juice most mornings. Making yoghurt is too ridiculously easy in the Argentinean summer; warm up some milk in a pan, dump in some old yoghurt, plonk the whole thing in a sunny spot on the patio, out of the reach of baby and dog (that’s the hard bit), ignore for eight hours. Fridge. The end. Speaking of the patio, our orange tree is just coming into flower, and in the beds we’re growing mint, parsley, chicory, tomatoes, zapallitos (little round marrow-like things), runner beans, and we will have oregano when I just figure out where I put that packet of seeds down yesterday. At the moment the crop making the most progress is the runner beans. Those seeds were imported possibly not entirely legally, so if you see any news stories about giant runner beans taking over the southern hemisphere, remember you heard it here first; but don’t tell anyone it was me.

Long time no communication. We remain without internet, and the flotsam and jetsam of life sometimes seems to occupy a lot of time. Last week it took me three trips to the electricity company to have the bill changed into my name, and two trips to the Banco de Cordoba to pay the police fine that I incurred by driving on the arterial road without my headlights on Friday. (Law here is that headlights must be used on major routeways at all times, except I forgot to switch them on.)
On the whole life is going OK, we like San Francisco very much. Our house is right in front of the neighbourhood plaza, and our view at the front windows looks like this: 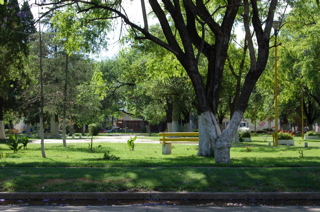 which is not an entirely unpleasant backdrop for eating ones breakfast. What we can’t quite understand, given the proximity of fifty mature trees, is why the sparrows insist on trying to nest in our window blinds, squawking peevishly whenever we raise or lower same. On the far side of the plaza, just visible through the trees, is a well-kept children’s play area which Joni loves. We stop there most days on our way to or from wherever else we might be going to. 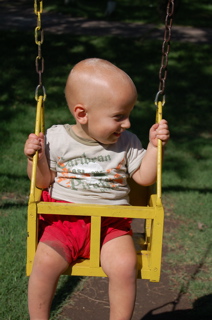 Ministry-wise, things are starting to take shape. We have been going out to the village at Quebracho Herrado once or twice a week, meeting with different people. I managed to get the car stuck in the mud there this week. Didn’t have the camera with me, but Martin said the car looked like I’d been rally-driving. At the moment priorities include building a relationship with the school; the head teacher would be best described as “interested but wary” at this stage.

At church we have done a couple of teaching slots, and taken the mid-week meeting for the last two weeks. Last Sunday we invited the whole church home for an “English tea”. I spent a couple of days baking scones and biscuits and cakes, and we made all willing victims drink their tea our way; “put a little bit of milk into the bottom first…” The end result was something like the Mad Hatter meets the Typhoo chimps (or was it Tetley?) but it was all good clean-ish fun; 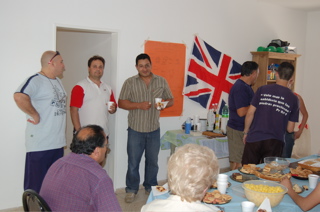 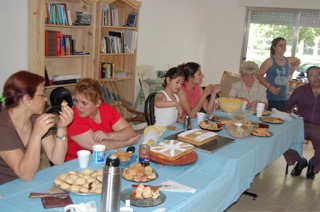 The senior members of the church testing our sofa for durability; 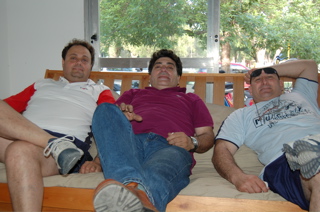