Mummy, did you make me a cake?

I did (thinks; lucky I knocked that out at one in the morning after we got back from Cordoba last night).

Has it got smarties on it?

It does (phew, good guessing mummy).

What would you like for lunch on your birthday?

OK, and what would you like with your cauliflower?

That part was actually harder than it sounds; from being in plentiful abundance three days ago, it took a trawl through three greengrocers to track down some cauliflower which had also inexplicably tripled in price; either the cauliflower season has finished, or possibly someone’s field was flooded out by all the rain we’ve been having.  The fish shop was also closed, but luckily we discovered the posh butcher also does fishcakes so we were able to meet all his requirements.

He had a kite with a lion on it for his birthday, which had its maiden flight at Scouts in the afternoon to much delight (both his and the Scouts).  It also accompanied us to the plaza today, although the plaza turned out to be rather more complicated owing to the presence of too many trees, unlike the scrubby bit of waste-land behind the Scout railway-shed.

We’re doing his party on Thursday, partly because the weekend already had too much stuff in it, and partly because it’s a bank holiday (yes, another one) so some people are away including the lady who owns the play-barn which he and his mates are going to trash uh enjoy for his party.

And isn’t it amazing what 24 hours can do?  Joni’s been showing us all day how much more grown up he is, how much taller he is, how much faster he can run (obviously he grew half a metre overnight) and generally how much more impressed we should be with everything he can do now he’s five.  So naturally, we have also responded by giving him an opportunity to impress us with how much more quickly he can tidy his toys away, and how much less complaining he can do when we ask him to help clear the table… High fives all round, he’s a fantastic kid.

You can splash around in duck feet.

You don’t have to keep them dry.

Duckfeet wouldn’t be a bad option around here right now, given that my current choices are between the wet footwear or the other wet footwear, and this has been the view from our dining room window for various parts of today;-

… I wish I had a whale spout

A whale spout on my head! 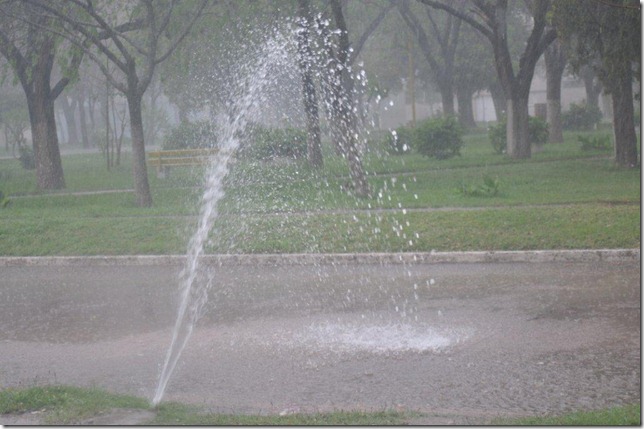 I know just what she would say:

“Not in the house!

You turn that off!

You take that spout away.”

Very little chance of turning it off while the rain continues, as indeed it does.  Our own spout is caused by the grass roots restricting the bottom of the guttering.  Note how the water flows directly into the road, it’s meant to do that, which partially explains why San Francisco disappears anytime it rains for more than twenty minutes.  And we should be grateful for small mercies since the deluge into the road does at least mean that most of the water on the roof is draining off in traditional manner rather than via the alternative route through the cracks in the office ceiling.

Loveliest of trees the cherry now

is hung with bloom along the bough

From Dr Seuss to AE Housman I think caters for a fairly broad literally span.  Ok so this isn’t a cherry, and it isn’t white and it isn’t Easter.   But it is pretty, and it is the view looking the other way from our dining room window, and it even still has a cloud of blossom on it despite today’s rain: 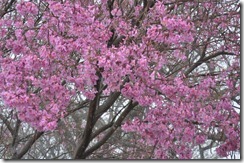 The sermon that I gave this morning can be found under the sermons tab. I think it went OK, I’m not fully convinced about how it holds together, but I’m used to my preaching invites arriving about a year apart so if I started having a regular fixture on the preaching rota then I will have to learn the art / discipline of producing something coherent on a regular basis rather than a corker once in a blue moon.
Other than that we had visitors over the weekend, prison-visiting types from Cordoba. “La Chanchita” has been going into prisons for thirty eight years, after becoming a Christian during his own youth spent on the wrong side of the bars. He’s an amazing character and we’re planning on going across to see him in Cordoba later in the week.

not conducive to success; unpromising.

“Mummy, why do we have to see if there are any lizards in my hair?”  Yes, the weather is warming up and it is national nit week again.  I’m not quite sure how he made the journey to “lizards” in either language, but he doesn’t have any, or dinosaurs either.  We also learn that he isn’t a socialist as far as his own cash is concerned;  “No, because if I spend my coins then I wouldn’t have any coins left…”

The back half of last week degenerated into chaos when it started raining and the city disappeared.  On Thursday afternoon after three turns around the city trying to find a working route home the car gave up and sulked in the middle of the flood.  People might fall over themselves to hug and kiss each other here, but possibly not surprisingly, fewer are in a hurry to get their feet wet on behalf of their fellow man, and since our sulking Corsa was blocking the road I had the experience of pushing the car whilst attempting to operate the steering wheel by myself while watching several other drivers try to pass on either side, decide they weren’t going to make it and reverse away again, further soaking me with their tidal waves in the process.  Including a mini-bus filled with strong young male members of a local Christian foundation, may the Lord lift up the light of his countenance upon them (it may be that I didn’t use those exact words).  Fortunately our next-door neighbour appeared in his Kangoo and came to my rescue.  “Get in the car and I’ll push you with my truck”… you’ll do what???  “Get in the car…”  And bless him, he has obviously done this before because he used the front of his Kangoo to push me not only out of the flood and up onto the main road but almost back to the house, before my own beast reluctantly spluttered into life again, and what’s more he didn’t even chip the paintwork.  Which is better than I’d managed… I later realised that I had lost the front number plate at some stage during our sub-aqua city tour.  We’ve done this before, in exactly the same way.  And you needn’t think you can just pick up a replacement at Halfords.  Oh no, write off three days of your life filling in paperwork and collecting rubber stamps.  And the replacement has a big fat D in middle of it, for Dunce, so everyone else can see how stupid you were.

Keen to avoid this fate yet again (actually I don’t even know what the replacement of the replacement would say; RS for Really Stupid maybe?) I did another little tour of the city, unsuccessful because it was nearly dark, and because most roads were still under water.  And thus went off swearing to the Scout group to start making pancakes.  Over three days we made, stuffed and sold nearly 700 pancakes for our camp fund.  Thursday evening was a rather inauspicious start since of our five gas rings we could only make four work, and of our zillion frying pans only two appeared to be suitable for cooking pancakes.  However, I did manage to gather one useful piece of information… the local TV station “Canal 4” doubles as an informal lost and found, since people hand stuff in there to be announced in the in-between-programmes bits, and other people go along to announce their lost possession, and so quite often the two manage to be reunited without any announcements being made.  So Friday morning I went to Canal 4, where the lady at the desk dug out a clip-board with a list of number plates that had been handed in (no kidding… so why don’t they change the design so that they aren’t held on by bubble gum and gravity?)  where sadly mine wasn’t on the list, so she added my details to a different clip board of number plates still presumed scattered around the city.  And then she suggested I should try the bus station next since apparently they also have a collection of lost number-plates.  So I did, and there it was, although I couldn’t collect it because it was by now in police custody and I was required to prove that I owned the car, which luckily merely involved a detour back home to collect the paperwork rather than three days sitting in an office generating it.  Followed by another detour to the supermarket to pick up a couple of cheap frying pans.  I hope not to see another pancake for some considerable time.

And now this week is grinding gently into action.  I have another sermon to write for Sunday, which is quite an honour to have two so close together, I am normally the scraping the barrel option as far as the preaching rota is concerned, in fact this is the first time for literally several years where it hasn’t been a bank holiday weekend.  So I’m currently chewing on John 6 and why it matters that Jesus is the bread of life and what might he have meant by verse 26.

Totally unrelated but definitely worth a look, this link is to the sassiest article I’ve seen on the Paralympics I like it.