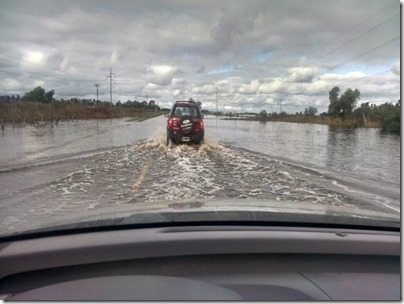 Yes, it’s still raining.  This is the Ruta 19, the main trunk road from here to Cordoba, the provincial capital.  At the moment a sizeable chunk of it remains impassible, with more rain predicted for tomorrow.  Martin and a bunch of blokes from church have a date on Saturday morning to go and give a hand to an old guy who has been wading around in five inches of water in his house for the last fortnight. 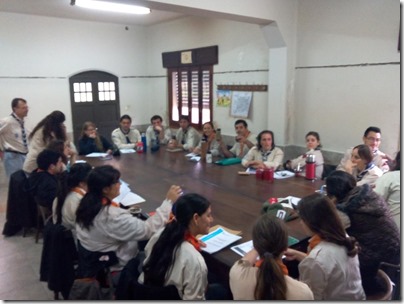 This is the district Scout leaders meeting which I was at on Sunday.  There are some wonderful folk in the district who I enjoy catching up with.  And it is great to see our Scout group moving forward from “small, poor and irrelevant” to starting to look like a force to be reckoned with.  We’re the posse in the orange neckerchiefs on this side of the photo. 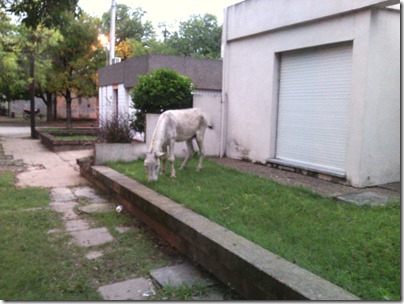 Martin chased this character out of our front garden the other day.  And then realised too late that if we’d left him for another half an hour he might have finished the job of cropping the lawn.

No photo, but at the moment most evenings we’re sharing food with a guy newly arrived in San Francisco from the north of the country looking for manual work.  Communication is somewhat interesting owing to him being Deaf and having significant speech difficulties, as well as a few other minor disabilities.  We realised that he can’t tell the time, so yesterday Martin hit on a workable solution; “When the sun goes down tomorrow, come to my house”.

Christopher Robin lived at the very top of the Forest. It rained, and it rained, and it rained, but the water couldn’t come up to his house. It was rather jolly to look down into the valleys and see the water all round him, but it rained so hard that he stayed indoors most of the time, and thought about things. Every morning he went out with his umbrella and put a stick in the place where the water came up to, and every next morning he went out and couldn’t see his stick any more, so he put another stick in the place where the water came up to, and then he walked home again, and each morning he had a shorter way to walk than he had had the morning before. On the morning of the fifth day he saw the water all round him, and he knew that for the first time in his life he was on a real island. Which is very exciting. It was on this morning that Owl came flying over the water to say "How do you do?" to his friend Christopher Robin.

"The atmospheric conditions have been very unfavourable lately," said Owl.

"It has been raining," explained Owl.

"Yes," said Christopher Robin. "It has."

"The flood-level has reached an unprecedented height."

"There’s a lot of water about," explained Owl.

"Yes," said Christopher Robin, "there is."

With acknowledgements to A.A. Milne.

After twelve days of rain, the forecast here today cheerily predicts that it will continue in similar vein till next Tuesday. 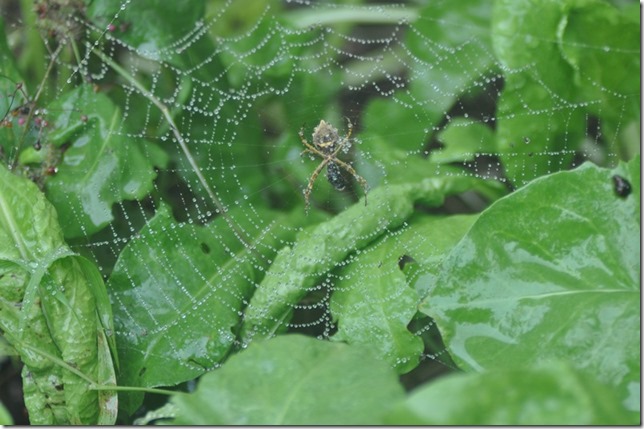 Apologies for those who don’t like creepy crawlies, but I thought that was beautiful with the water shining off the web.

It has been raining almost without ceasing for the last eight days here.  We’re doing OK, but spare a thought for folks flooded out up-country.

Closer to home, the Baby has been going to nursery for two hours a morning since Monday, which is improving relationships at home, and might even mean I don’t growl if Teen asks me occasionally to look after him of an afternoon/evening.

And we have successfully wrangled a special cinema screening of the new Jungle Book movie next Saturday afternoon for the three Scout groups in our district.

So it’s not all bad.

“But the plans were on display…”
“On display? I eventually had to go down to the cellar to find them.”
“That’s the display department.”
“With a flashlight.”
“Ah, well, the lights had probably gone.”
“So had the stairs.”
“But look, you found the notice, didn’t you?”
“Yes,” said Arthur, “yes I did. It was on display in the bottom of a locked filing cabinet stuck in a disused lavatory with a sign on the door saying ‘Beware of the Leopard.”
― Douglas Adams, The Hitchhiker’s Guide to the Galaxy

If you received our newsletter, you might be wondering how my paper-work trip to Cordoba went this week.   Here are the gory details.

Left home at six in the morning.  Arrived in Cordoba, and made my way to given address.  The building is unmarked, down a back alley, between what looks like an electrical substation and a disused garage.  But a bunch of Argentineans look like they might be going to do what I’m doing, so I follow them and thus discover that I am in the right place.

Located an information sign which says I need to be in office six.  Ask someone manning a desk to direct me to office six.  He doesn’t know.  Spot office six about three metres in front of where said employee is sitting.  I guess it might have been his first day.

Stand in queue at office six in order to be given a small green piece of paper.  This is apparently the explanation guide to the process to be followed.  It is in tiny print, poorly photocopied, and dominated by an unintelligible diagram featuring a bunch of arrows pointing in random directions.  I have a sinking feeling that this is going to go quite wrong quite soon.  The woman in office six points me towards the next queue across the corridor.

Stand in second queue in order to be given a second small piece of paper, in white.  This is a payment slip, which needs to be taken to a “rapipago” (payment system) office two blocks down the street, where I will need to pay 30 pesos (about £1.50) in order to progress.

Paid up, I call into a stationery shop next door.  Experience tells me that stationery shops can be good sources of useful information.  Sure enough…. “Yes, you need to buy this type of folder, and an index sheet like this, then you need to fill in the index like this, and I’ll make two photocopies of it for you, then the folder needs to be put together like this, and that will be twelve pesos please (60p)and I’ll lend you a pen and a hole-punch and you can let me know if there is anything else you need…”

Back in the original building, apparently now I need to be in office four from which the queue is oozing down the corridor, so I decide to take a break for lunch.  Head across town to the house of a fantastic woman who I haven’t seen since Joni was a new-born baby, hardly surprising I didn’t recognise her kids either.  That was the best two hours I’ve enjoyed in a while.

All good things come to an end, and too soon I am in the queue outside office four, until I am finally called in.  The first woman receives my paperwork with an encouraging “Oh, I don’t know what to do with you, I’ve never dealt with an foreigner…”  She calls a friend.  Who calls another friend.  Who confers across the office with a fourth friend.  The jury is out.  Two of them think they can receive my paperwork.  The other two are less convinced.  So they go for the safe option: make it someone else’s problem.  “You need to go to this other address across town and consult with this person”.

I wend my way to the second address from which the person in question has now left for the day.  But I am attended by three other people.  They offer a bunch of possibilities, all things I have previously attempted.  I start getting the impression that they are playing with me.  Finally, one of them suggests I go back to London.  Being fair, at this stage in the day there are few things that I am going to find amusing.  And this isn’t one of them.  So I’m annoyed and I leave.

Partway down the stairs one of them catches up with me.  “Don’t leave like that” He says.  Well how would you like me to leave?  “It’s OK I understand you”.   No you don’t, you really don’t.  “Calm down, come back upstairs and we’ll talk”.  I take a deep breath and follow him back up the stairs.  Bless him he was quite a sweet guy in the end, and he did everything he could to help me, including giving me his email address so that he can let me know if he manages to make any progress with any of the other people who by then had all left their respective offices and thus weren’t answering their phones.

The one thing that we did manage to ascertain was that I thought I had revalidated my secondary school qualification when I took a bunch of exams here about five years ago.  But no.  Apparently that is referred to as the “formacion nacional” (National formation), and in order to finish revalidating my secondary school, I need to take those certificates, together with the certificates issued by my country of origin (you know those bits of paper that I’ve never been asked for since the age of sixteen and I have absolutely no idea where they might be, even to the nearest town; those ones) and book an appointment in Buenos Aires to complete the process.  Fantastic.

And I missed my bus.  Fortunately by the time I made my way back to the bus station, it was nearly time for the next one.  And there were still some empty seats.