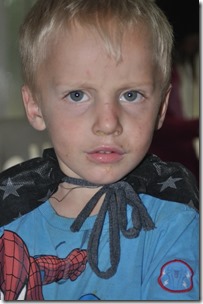 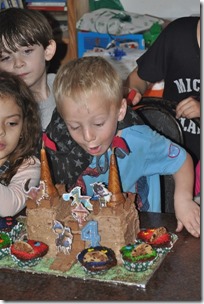 There were 25 three to eight year olds in the house.  We hired a bouncy castle for the back garden.  Fortunately, despite threatening all day, it didn’t actually rain.  I set the rest of the house up like a UK-style nursery classroom with simultaneous activities going on in different stations, and the kids meandered freely between them, which avoided having to try and herd them like cats to participate in organised group games. 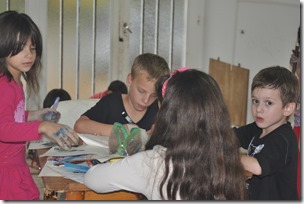 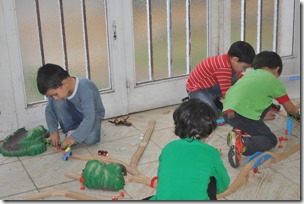 I loved the train corner, it was continually occupied by varying numbers of little boys all playing happily next to each other without interacting in the slightest, it was the quietest place in the house! 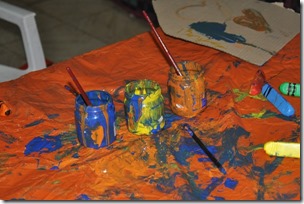 Note to self, omit painting table next time.  Blue paint can go a long long way. 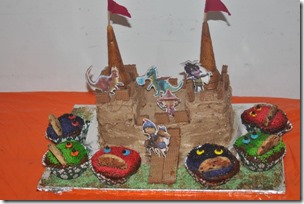 I had been given my marching orders for a Mike the Knight cake.  Cunningly the oven door went away for fixing and didn’t come back, so I made the sponge cake in the microwave which I never tried before, but luckily seems to work.  Joni helped to decorate the cookie-monster buns.  I’m not sure if they are supposed to be attacking or defending the castle, but I saw them in someone else’s blog and I thought they would be fun to add a splash of colour. 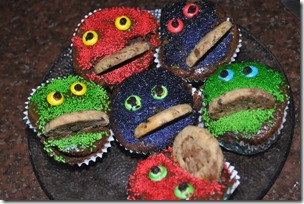 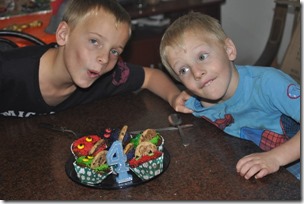 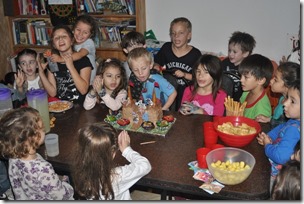 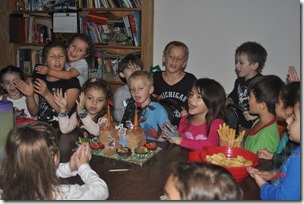 Days in general start at 06.25 I take the dog out for a walk, back in time to ensure that Joni has everything he needs for school, and to give Teen a lift to the secondary school, she walks home later, but we’d all have to get up even earlier if she walked there in the mornings, and I do find it quite beneficial to have that ten minutes together in the car.

Home again, time to wake Danny up and have some breakfast together, then take him to school on the back of the bike.  This is our normal Monday-Friday getting everyone out to school routine.  Beyond nine o’clock, different things happen according to whatever other commitments might be in the offing.  Today I have English lessons, so having dropped Danny off, I continue on the bike to an English conversation client, who I meet in his family’s office, and then on to the next one, an elderly lady who I meet in a cafe.

English done, I continue on the bike to the other end of town to see a man about a freezer.  The best use I have found for Facebook is local buying and selling pages.  Second hand freezers are fast sellers here; I’ve been chasing after any that have come up for the last couple of months  The guy knocks a lump off the asking price to take account of a minor repair needed, then he glances at my bike, and offers free delivery if I’m happy to wait till late afternoon.  For free, anytime you like.

Swift detour to pick up fish from one shop and fruit and veg from another, and it’s home to start cooking lunch before the ravenous hoards arrive.    Oven on, and I have just started rubbing together a crumble topping towards dessert when they all appear in the front garden.  Danny is clutching right arm and whimpering in a possibly-broken sort of way.  So lunch is temporarily abandoned in favour of an expedition to A and E.

This is going to be an interesting experience, because we have recently jettisoned the Seriously Rubbish UK-based emergency insurer (ask me privately if you want to know who to avoid) in favour of a local provider who should be covering us for all health care in Argentina, emergencies and otherwise.  And this is the first time we have used them in anger.  Our ongoing experience with Seriously Rubbish UK is that any attempt to access care would be initiated by several phone calls, and at least one argument each with the insurer by phone and whichever local clinic we were trying to use, followed by giving up the battle at that stage in favour of paying for treatment upfront, knowing that this would result in a protracted process later on in order to try and reclaim the expenses.  For something like the last eight years I have been personally convinced that we could do better than this, but I hadn’t managed to persuade Mission UK, to allow us to try it.  So today was the day when I realised that convinced as I am, we really have made a decision on the back of other peoples’ anecdotes.  I presented our new, shiny, written-in-Spanish local insurance card and held my breath.  And we were in.  Phone calls, zero.  Arguments, nil.  Money changed hands, not a whiff.  Couldn’t have asked for a friendlier service.

The duty doctor in A and E (in the singular – San Francisco is a small place) agreed that he was probably looking at a broken arm, but unfortunately the radiologist (also in the singular) had gone for lunch, so we could either wait or come back at 2 o’clock.  I made a non-medically-qualified decision that he wasn’t going to need surgery so it would be just fine to feed him, and we went home and finished making lunch.  At two thirty we were in radiography.  Quote of the afternoon “I’m not a skeleton, you can’t see my bones”.  The x-ray confirmed a green stick fracture, the duty doctor put a temporary bandage on and told us that the traumatologist will see us for plastering at five, after the swelling has gone down a bit.  So we went home and organised Joni’s homework.  At five, Danny and I went back to the clinic leaving Martin to post Joni off to swimming.  The traumatologist and four nurses put the arm into a cast (“But I didn’t want that”), and we were home by six-thirty.

Quick phone call to apologise to the freezer-man that when I said we were going to be in all afternoon, I hadn’t reckoned on broken bones.  No problem, he is now on his way with the freezer.  I zip out to pick Joni up from swimming at seven.  A round of drinks and snacks for everyone.  Normally Martin would have a Bible study this evening but a fortuitous mix-up over times means that he is free, so I don’t have to take the kids to the Scout leaders’ meeting with me at eight.  Martin feeds them, I hop on the bike and lead the meeting (score; one camp, two fundraising events and a parents’ workshop).  Home just before ten to grab a quick bite to eat and an aluminium cup of red wine (beggars can’t be choosers).  Sometimes I’m not too sure what I’m supposed to be working towards in Argentina.  And then I wonder when I would ever have time to do it anyway.  Today’s notable achievements; one broken arm:- 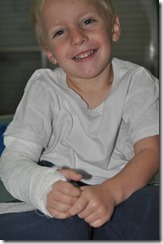 and one second hand freezer:- 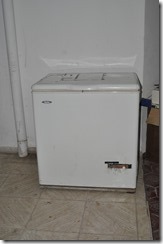 We didn’t vote.  I did briefly consider registering.  Then I realised that I really have crossed that ex-pat line where I live in a country when I can’t vote and don’t understand the politics, but I also no longer understand the politics in the other country where I would be eligible to vote.  I have tried to follow it on the news, but the main impressions that I have managed to glean are that UKIP are a bunch of fascists, the Greens have forgotten about being green, and everybody else is a clone army of posh gits arguing over the croquet lawn.  None of which seemed like a great basis for casting an informed vote.

Scout camp last weekend was fun and frustrating in equal measures.  We went by bike to Josefina, a little village around 15 kms away from here.  The 11-18 ages in our Scout group have been going by bike to local camping destinations for the last couple of years.  Good for the environment, and the physical fitness of the kids, it also deals nicely with the fact that quite a few of ours don’t have access to any other forms of transport.  Having taken over the 11-15 group this year, I got to go by bike, hoorah, sleep in my own tent, hoorah, and cook every meal on a fire, hoorah.   When I went trawling around on the internet putting together ideas for activities, it amused me to discover that these days in the northern hemisphere, Scout groups talk about “survival camps” as being something special when the kids have to make their own fire and cook their own food on it.  To Argentinean Scouts, that’s just “going camping”! 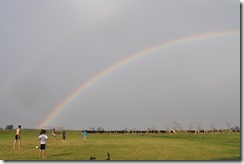 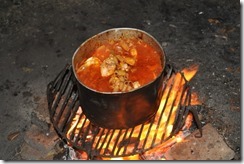 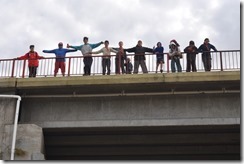 The bit that is probably going to take me all year to figure out is how to relate to this group of kids.  They have a reputation for eating Scout leaders for breakfast, which is how I’ve ended up with them because they’ve munched through most of the rest of our adult contingent over the last couple of years, and no-one else wants to take them on.  I never planned to work with teens.  But I’m finding that it’s a similar set of skills I think to the ones we are developing in relationship with our Teen – maximise spending time with them, lots of close-watching of reactions and interactions, figuring out when to ignore and when to be robust, and learning to pick the right moment to capitalise on receptivity to any attempted intervention.