In Argentina it is culturally inappropriate in lots of circumstances to admit to not knowing something. This would be a good thing to bear in mind when trying to obtain information. We have found that the best way of asking for directions is to keep approaching different people until we have received the same answer from at least two respondents.
Staying for a couple of days in Cordoba with sister et al, the guy who runs the hostel recommended that we take the “tren de las sierras” (train of the hills) out to the town of Cosquin for a day. It seemed like a good option, so we did. “It leaves at 9.30, so you need to be out of here by 9 to catch it” he said. “Take the trolley bus and ask them to put you down in the right place for the station”. “You need to get out here and walk one block that way” said the trolley bus driver. So we did, only the station wasn’t there. So we asked someone else. “It’s three blocks back the other way”. So we asked someone else “Further up that way”. Edging to the critical 9.30 we ran the last two blocks and rushed up to the ticket office. Plenty of room on the train, it will be leaving at 10.50. Ah well, the exercise was probably good for us and at least we didn’t miss the train, even if the entertainment value of the station did wear thin a while before the train pulled in.

The “tren de las sierras” is well worth the trip, it takes a couple of hours and winds lazily through the north of Cordoba city before taking to the hills, meandering along a gorge to the San Roque reservoir with a river dipping down to the left, and the mountain range of Los Gigantes in the far distance. It was a clear sunny day, I enjoyed watching the storks and egrets on the rocks of the river, Joni enjoyed the cows and sheep in the small-holdings along the banks of same, and the rest of the passengers seemed to be fairly mesmerised by my nieces and nephew who were singing their way through their Sunday school songs in English, complete with actions.

We arrived in Cosquin to find with much excitement that it had been snowing. Not a great deal by northern hemisphere standards, but snow none-the-less, with little snowmen dotted around in people’s yards, and even on the roofs of cars. Probably the most interesting thing to do in Cosquin is to visit the Pan de azucar (sugar loaf) which is a pointy hill with a cross on the top. At around Ben Nevis height, it is hardly K2, but it is the tallest peak for a few miles around, and it has a chair-lift to the summit. I knew where the track to the hill started, having driven past the entrance many times, but I didn’t know how far it was between the signpost and the top, so we asked the people who were working in the bar where we had lunch. “It’s a long way” said the lady “maybe forty kilometres”. “No way” said the man “it’s a kilometre and a half at the most, you can easily walk it”.

Thus armed with the useful knowledge that the track was somewhere between one and forty kilometres long, we walked it. After we had been going an hour, we passed a signpost. It said “Aerosilla (chair lift) 5 kilometres”. So we stopped and had a little conflab, and decided to press on. After we had been going another hour, we passed another signpost. It said “Aerosilla (chair lift) 4 kilometres”. Appalled at such cruel and blatant fiction, we threw our toys out of the pram (or we would have done had we had a pram… which would also have been handy for carrying the small children who had been taking turns riding on our shoulders for the last two hours) sat on a rock and ate chocolate biscuits and sulked while we debated the relative benefits of walking the however many kilometres back into Cosquin, versus the possibility that the top of the hill might only be four (or possibly thirty four) kilometres hence.

As the little minibus hove into view, I half-heartedly waved a thumb at the driver, and he stopped. “You don’t want to be going up there at this time” he said “the chairlift will have stopped running for the day anyway, and it’ll be going dark soon and then how will you get down with all these children?” A chink of light, I inserted a wedge; “That’s OK, just give us a ride up, we’ve only got one day in Cosquin and we’ve made this much effort getting this far, at least we could see the top, we can thumb a lift down or something.” So we all piled in and the track wound upwards. I tried to turn the chink into a shaft; “Will the chair lift definitely have stopped running?” “Definitely; I’m contracted to bring the staff back down when they close for the day…. I’ll see what I can do… (five minutes later)… It’s still going, they’ll wait for you”

The waiting lift operators ushered us onto the aerosilla and up we went. Slightly disconcerted to see the rocky ground underneath us strewn with dropped-off bits of aerosilla… safety bars, the odd seat. No dead bodies, I guess they clear those away, can’t be good for business. It is a good ride, and the view from the top is spectacular across the range of hills; we could see Cordoba way down in the valley in one direction, and Cosquin way down in the valley in the other direction, and the route that we had walked. That really was quite a long way. OK hardly excessive if you’re up for a hike, but way too far for an unplanned afternoon stroll carrying a child on ones shoulders.

As we were about to go down, our saviour minibus driver reappeared by my right ear and said “wait for me at the bottom and I’ll run you back to town”. So we did and he did. Hoorah hoorah hoorah. For which we tipped him handsomely, accepted his business card, and strolled into Cosquin to celebrate with coffee for the adults and a little souvenir shopping for the kids before catching the bus back to Cordoba.

More visitors… my sister Lisa, husband John and their tribe of three are down for a couple of weeks from Maryland. Joni and I went down to Buenos Aires on Saturday night to meet them off a plane, and take them on a bit of a tango around the obligatory tourist sights of the city… La Boca, calle Florida, la Casa Rosada, la Plaza de Mayo, la Reserva Ecologica, San Telmo, el hospital… ooops; possibly not on the traditional tourist-route, youngest child fell off the seesaw to the tune of four stitches, but he was back playing in the park within the hour so no real harm done. Tuesday night we did the overnight bus thing back to San Francisco, and since then we’ve been bumming around in sunny San Fran. The visiting kids are loving the plaza over the road, and the neighbourhood kids here are on holiday from school at the moment so they are all enjoying each other’s company; language doesn’t seem to be a great barrier to sharing a seesaw. Tomorrow we have half the known world primed to come round for that most important of educational cultural experiences in Argentina; half a cow gently roasted over the glowing embers, accompanied by a drop or two of red.

They have a different understanding of time out in Quebracho Herrado. It is a very little village; only 400 inhabitants or so, and although it is only twenty kilometres from the thriving city of San Francisco, it might just as well be on another planet.
This afternoon I called in for a coffee at the bar on the plaza, but I found the door barred. Behind the door sat the owner, drinking mate, and since she was clearly visible through the door, I knocked.
“Are you closed?” I asked (stupid question, but I hoped it might give her an opportunity to say that she was just opening)
“We’re closed” she said firmly.
“When are you opening?” I asked, more tentatively.
“Later” (Obvious response to a stupid question).

On my travels around the village today, I heard that the “new library” has managed to collect some books to put on the shelves. That’s good news. How long has the new library been open? Seven years.

I also heard that the “new doctor” has made such a positive impression on the people of the village that they are even starting to go to his surgery rather than travelling to San Francisco. That’s good news too. How long has he been living here? Oh, since about a year last June.

So really, who knows how long it might take the coffee bar to prime their machine.

One of the best and worst characteristics of Argentina is her spontaneity. Sometimes it drives us mad that nothing is ever organised until two minutes before it happens. Other times we love not having to do that “comparing diaries” thing when we want to see people, which leaves everyone free to “seize the moment”.
11.30 Sunday morning, church had finished earlier than usual, so what shall we do? “Let’s throw a couple of chickens on the fire and invite some people round”. 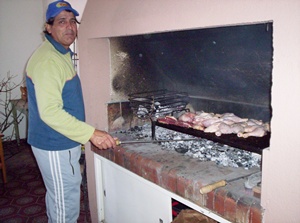 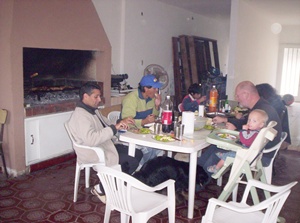 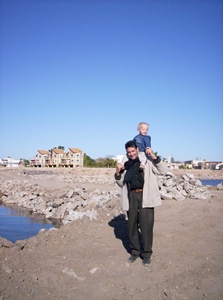 Sergio, an ex-prisoner friend of Martin’s came to stay for a bit this week to take some time out from his not-too-easy home situation in Cordoba, so of course we did the obligatory trip to Miramar on Monday afternoon to see the ruined town and the flamingos on the salt-marsh:

I have also been to Quebracho Herrado a couple of times, particularly making friends with a family who have a disabled child who isn’t receiving any schooling or stimulation… I’m hoping to build up enough trust with the mother that at some stage she might let me take him out for a walk around the village on my own, as a starting point for working with him and see where we go from there. This is a rural community, trust takes time to build and people are both curious and suspicious of outsiders. In fact as I was walking round the village the other day, a lady on a bike slowed down on her way past me and asked “¿Quien sos?” (“Who are you?”) which was honest if slightly breathtaking in its directness! Question is… what is the answer, and is it the same as the answer she was looking for?