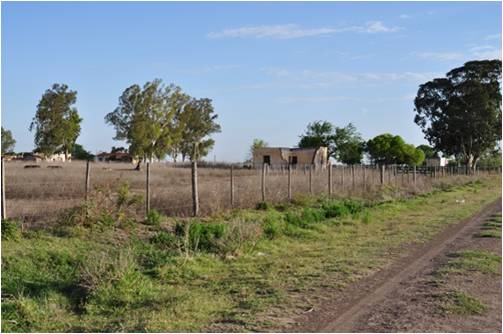 It might look like an abandoned barn in an overgrown field, but this is in fact the metropolitan centre small hamlet of Luis Sauces. It has five houses and a little primary school which also caters for the surrounding rural community, and one dirt road in and out where roaming sheep and cows are more plentiful than motorised traffic. Most Monday mornings find me in Luis Sauces. After tentatively setting out yesterday I was relieved to discover that the dirt road is still passable after a heavy rain. 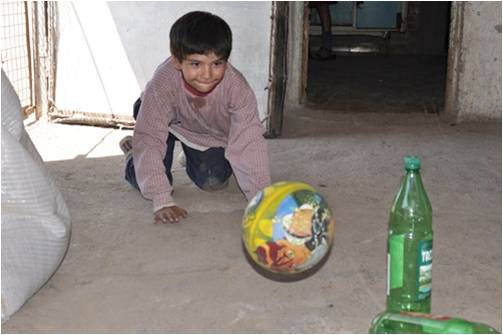 The little boy who I am visiting is a lot of fun to be with. Responsive and relational, I find myself wondering how much more we could achive if I was seeing him every day, or even three times a week. But, it is a drive into the back of beyond, and I’d have to drop a few other things to make it happen. And then I remember how for kids in special school (or any school) in England (and Argentina) an hour of a teacher’s whole and undivided was (still is?) a rare luxury. I remember days when I used to deliberately volunteer for toiletting duty just so that I could spend one-to-one time with the kids who I barely spoke to the rest of the day. And that was in an expensive, supposedly specialised environment. Two wrongs don’t make a right, but at the moment the little I’m giving this guy is probably the best chance he’s going to get.

So we play. I bring games and ideas, and he responds, and I respond to his responses, and we laugh, and take turns to fish the ball out of the chicken poo again. In rural Argentina play isn’t a big concept. Kids are kids until they are old enough to help on the land, in the house, with the animals. I asked the family who plays with him, and they responded “no-one; there aren’t any other children here”. Only children play. And even that isn’t the whole story, because there are a few teens around, but these teens have long since become working adults, having finished primary school at 11. I’m saying “rural Argentina”, but actually it was only a couple of years ago, that in a magazine from Buenos Aires I read an article proclaiming that “play is good for children’s education”: that which I take for granted is still newsworthy stuff even in the most sophisticated and cosmopolitan of urban environments here.

So we play. I’m sure the family have no idea what I think I’m playing at (in every sense). Some of them make themselves scarce. The braver ones stay and watch. No-one has dared join in yet. But I think they appreciate that I’m trying to do something good for their kid because they have started “paying” me in eggs. More eggs than the three of us here could possibly get through. So from building community in Luis Sauces, we are building community back in San Francisco by re-distributing egg parcels to our friends and neighbours here.

Quote from the neighbour’s kid who had taken Joni to play in the plaza the other day:

“We’d picked you a flower, only Joni ate it on the way home”.

When not chewing on the flowers in the plaza, he’s taken to sitting in the washing basket staring out of the window like some imprisoned little waif. 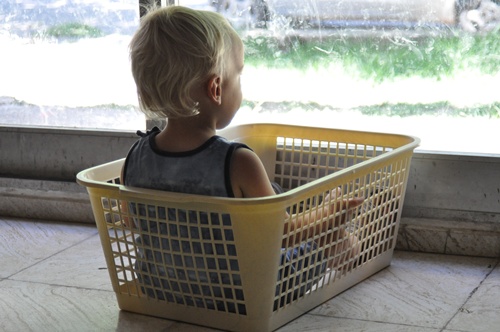 Plans B to F: We will leave at x-plus a bit-o’clock after the child has refused to get dressed, the dogs have refused to come in from the plaza, we have lost and found the relevant bits of paper, and remembered that the car only just has enough petrol to limp to the nearest filling station. We will look neat and presentable, until we have been stuck behind fifteen slow moving lorries and been stopped at three police check points and losing the will to keep going, have pulled off for coffee and cookies in Arroyito, and foolishly bought a supply of chocolate to keep the boy happy, or at least quiet, on the next leg of the trip. We will arrive at x-plus-3 o’clock, or x-plus a bit- plus three plus a bit more and the rest….. We will arrive sometime, hopefully on the same day as we set off. Neat and presentable long since disappeared under a layer of chocolate and biscuit finger-prints. We will achieve the list… some of the list… the most essential items from the list… We will achieve whatever we manage to achieve before everything shuts for the day anyway.

Thus we left at nine this morning and arrived home at eleven this evening.

The meeting. Needs some further discussion. First impression; huge disappointment but with potential to become stupendous if we can get it together.

“it’s been a quiet week in the global village”, so goes the title of my friend’s book. Actually there is quite a lot of stuff to write about and I have three different blog entries in different states of being-written, except that we had to rebuild my computer, and we’re only just getting to the stage of re-installing the useful things like files and photographs that I need for writing blogs with.
Tomorrow we’re heading to the bad-lands of Cordoba. It’s not that bad really, it’s just that I never felt at home there and I like San Francisco a lot better. Anyway, we have a meeting to go to which I’m quietly excited about in a trying-not-to-be sort of way, in case it turns out to be a big disappointment. If you do praying, and if you don’t mind not being privy to the full details, then we would be very grateful for the odd tiddlywink on the lines of “Please let there be a stupendous outcome for Hazel and Martin’s meeting… amen”

After some five-hundred years of largely unchallenged supremacy, it is probably hardly surprising that Catholicism is so embedded into Argentinean culture that that which passes for Evangelical theology here is frequently little more than a reactionary attempt to define ourselves as “not-Catholic”, a fact which was illustrated to me once again this morning while I was teaching the older kids at Sunday-school.
First indication; opening a group discussion on the life of Jesus quickly turned into a discussion on the person of Mary. Second indication; every child had an opinion on the person of Mary whether from their parents or their previous Sunday-school experience.

Thus we abandoned the plan in order to explore a range of intriguing questions from the floor; Did Mary really exist? Was she a real person? Was she really the mother of God? If Jesus was in her tummy, then she couldn’t be a virgin could she? (Cue exegete of Matthew 1:18-20 combined with impromptu sex-education lesson). But my favourite of all was:-
“If Mary used to be a real person then why has she turned into a statue now?”

I’ve been fiddling round making the video mode work on my new camera, I even had to read the instruction book, imagine. Then I had to go and find and download a free video editor; Virtual Dub small and effective, and not beyond the reach of the non-geek user. Then I had to join Youtube and figure out how to put the edited video up there, and then lastly I had transport it back into the blog. And this is the result. It’s probably mostly of interest to the grandparents and other long-distance relatives but it’s been fun playing around making it work.

Not remotely related to making block-busting movies, I also made seven pots of strawberry jam, which actually set, despites my fears. And now the men in my life are muttering about scones, so that’s about to be my next project.

These hot light mornings, our small human alarm goes off way before his parents had planned to be on the move. By the time he goes into nursery at nine we have built a train track on the floor, watched some Thomas the Tank engine, read a story, squeezed the orange juice, and even been to play on the swings in the plaza. Luckily he has taken to having two-hour siestas to make up, so it is just a case of juggling the day around a bit to make it all work.
Today I did the usual pre-nursery stuff, followed by gratefully handing him over for a couple of hours, followed by driving to Quebracho Herrado to see the head of the primary school, followed by driving home again and starting on another powerpoint that I need to put together (should have been done a week ago really but…) followed by making shepherds’ pie while Martin went to collect Joni, followed by clearing up and watching some rubbish TV while Joni had his siesta, followed by driving to Quebracho Herrado yet again to do some work with a couple of little first graders, followed by taking Joni to the plaza, followed by nearly managing to get in the car and go home except that someone came to see me so that was delayed by nearly another hour, followed by driving home and throwing Joni in the bath, followed by jumping on the bikes and going to the Bible Study group that Martin was leading tonight. I have to confess I spent more time playing with the kids than I did in the pursuit of scriptural enlightenment. I could pretend I was performing a useful service but it was more a case of the failing brain-cell.

And now it’s bed-time and there’s a dramatic storm happening outside so I’m off to watch it.

I did a report a while back for a major church about how they could be and should be using IT in their mission. Politics took over and they rejected the report…

Why is this? Two things spring to mind. One, we operate on a shoe string: “If you pay peanuts you get monkeys”. But that was also true of the small secular voluntary organisation I last worked for peanuts for, but politics didn’t seem to be a major issue there (apart from when we had to deal with social services, and then the bad politics were all theirs). And two, “All institutions are oppressive”; because by defining a system you are either bending the exceptions to make them appear to fit, or excluding them altogether. But that is also true of any defined system including those of the secular voluntary sector. I promise I don’t have rose tinted spectacles, there are some pretty bad, patronising, plain nasty voluntary organisations out there, particularly in the field of disabilities, but if you’re looking for case studies of poor decision making, you’ll find the Christian sector hard to beat. Why is this? 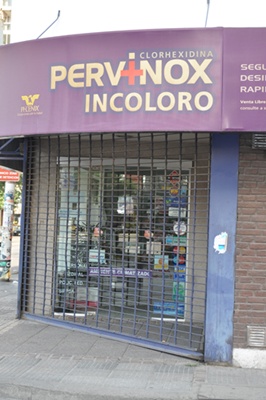 Would you buy your aspirin from a pharmacy called Pervinox?

We have been married five years to this day, and so far I don’t think we are doing too badly at it. When we were thinking about getting married, a friend of Martin’s gave him this scientific piece of advice;
Ask yourself which would be more likely to jeopardise your happiness; marrying her, or not marrying her.

Might not have been my style, but it seems to have worked out!

We went out for a quiet meal in our favourite bar last night, sans boy. Going out without ones kids is a very strange idea to the culture here, and there were several running around the bar last night, but every so often we reserve the right to act like life-forms from another planet and pay our favourite teenager to babysit.