Skip to content
Merry Christmas all. Here’s what we’ve been doing the last few days… 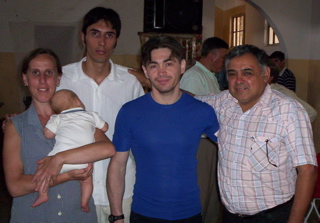 Since Christmas doesn’t start in October here, our first event was last Monday, when we celebrated with the guys in the prison. I realised how famous Martin has become in the prison, when I was walking through the corridor with Joni, watching the guards pointing him out to each other as “son of Frost”. We had a service, with some speeches given by sundry invitees, followed by sharing a large cake. It was a good atmosphere, and Joni was in his element being passed around between the infamous of Cordoba. 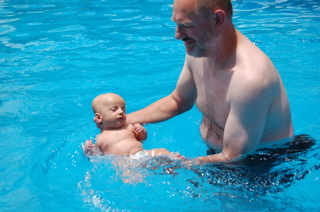 The same evening found us on a bus to San Marcos where we spent a few days sharing a cabaña with the family of our friend and team-leader, Priscilla, affectionately known as La Jefa (the Boss). We had some good working/not-working time; went to the childrens’ home a couple of times, and bounced a few ideas around. Joni had his first dip, which he responded well to, after the original surprise; he’s used to a slightly different bath-time routine….

Christmas happens on the 24th here, which we spent with our friends Ana and Oscar, sharing food and fellowship before heading outside to watch the fireworks at midnight. I really like the uncomplicated nature of Christmas in Argentina, although as an English person I also feel cheated that nothing happens on the 25th; it’s just another bank holiday like any other. 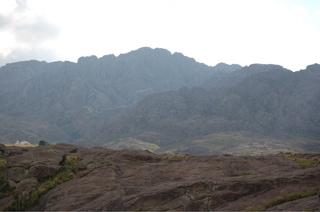 This year the 25th began even less auspiciously than usual, with the discovery that we had a burst pipe leaking water down the kitchen wall. The small consolation was that clambering onto the roof to locate the stop-cock was probably slightly more interesting than watching the East-Enders special which is apparently what half of the UK population were actually doing. Our second discovery was that there was no food in the house because we’d taken it all to Ana and Oscar’s the day before. Luckily, eating chocolate for breakfast on Christmas morning is an age old family tradition. Deciding that the day needed some improvement, we took the car out for a random drive into the back of beyond, and came across this rather cool range of mountains. Ambitiously named Los Gigantes, (The Giants), they aren’t exactly Everest or even Aconcagua, but at 2,300 metres, to us Europeans they are a very respectable height. 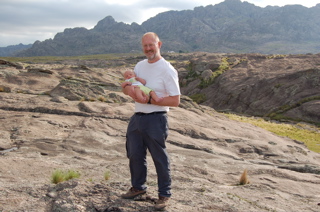 Unlike most mountains in Europe, we were the only people there. And just a couple of kilometres away we found a little outpost selling the scrumiest empanadas (think Cornish pasty). Now I’m coveting a serious baby-carrier rucksack so we can go for a proper walk another time.

Domestic story coming up, would apologise but, hey… 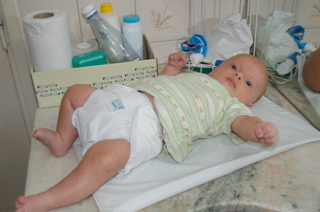 There are a lot of good reasons for using cloth nappies over disposables, price being one; here’s a few more…


When I made this clear decision several years ago, I hadn’t figured that I would be giving birth in Argentina. Ho hum.

Searching UK websites for “cloth nappies” brings 305,000 hits, increasing daily… cloth nappies have made a real come-back in the UK.
Searching Argentinian websites for same brings a handful of hits, mostly well out of date. The one interesting thing I found out was that there had been a real attempt to re-establish cloth nappies during the 2001 economic crisis, when the cost of disposables had gone up 150% in six months, but even in those circumstances, the attempt was unsuccessful. I haven’t got my head round this really, but the sociology of it does interest me.

The one drawback of cloth nappies is the inconvenience of having to wash the things. It has been suggested that the reason for their lack of popularity here is therefore related to higher rates of poverty and therefore lower rates of washing-machine ownership. Except for three things… One, most people in reasonably paid employment do have washing machines, which isn’t everyone, but there are probably still several million washing machines in regular use here…. Two, the last economic crisis is credited with decimating the middle class, the very people most likely to own such commodities; stories abound of people who found that their fur coats were worthless when they couldn’t afford to buy food…. Three, the owners of the posh 4x4s towing jet-skis who overtake us on the motorway not only own state of the art appliances, but they also pay other people to load and unload their washing machines for them… inconvenience factor eliminated completely. So, I don’t know what the real issue is, and in any case it didn’t solve my problem.

So, I ordered some stuff from the UK, and got a friend to export it by post. Except that the post here isn’t that good either, thus only some of it arrived; enough to keep us going as long as we did the washing every day, a regime that was never going to last very long. So then I made some. That was arduous. My sewing teacher at school used to say “haven’t you got a violin lesson to go to?” on the rare occasions that I showed up to her class. I made a few. And I ordered some more waterproof wraps from England which actually arrived. And then, I received an email introducing me to a lady near the city of Buenos Aires, who, having made cloth nappies for her own baby, is now beginning to produce them commercially in a micro-enterprise sort of way. So I arranged to go and meet her last week while we were in BA.

Picture hot sweaty city bus full of hot sweaty standing passengers. Stops every two blocks. The trip takes three hours each way, and we saw the first blade of grass at the two hour mark. At the other end I found a rather cool alternative community, people building their own houses out of wattle and daub, growing vegetables in a communal garden, wrapping their babies in home-made nappies… Marvellous. So I bought a batch of those, and a couple more waterproof wraps for good measure.

Meanwhile, the outstanding original consignment from England also arrived through the post having taken a round-the-world mystery tour. So now we have nappies and waterproof covers in a full range of shapes, sizes, colours and designs. Personally I’m happy with the ones made here by Marcela, and now I know where to go when we need more. And through the contact that we made, she has now received an invitation to sell them through a shop in La Plata, and we are also advertising them in San Marcos, a local magnet for hippies and “alternative” types. Not sure Billy Graham would think that’s a good result for a day’s work, but my standards are a bit lower and I count it as a small victory.

Here we are in Buenos Aires, doing Joni’s paperwork. Now he has an English birth certificate and a passport, and we’re heading back to Cordoba on the night-bus in a couple of hours. We discovered on the night-bus coming here that we could all have a reasonable trip if Joni slept in the footwell; I just had to remember not to stand on him. We continue to be jolly grateful that babies in Argentina can be breast-fed more or less wherever is convenient; our favourite places so far have been the foyer of the British embassy, and the steps to Harrods; what a fantastic culture.
As always we have made the most of the trip and enjoyed visiting people and fitted in a bit of touristing here and there. Sunday afternoon we went on a long explore, taking in the nature reserve, which is the one oasis of relative calm in Buenos Aires. On route we went to see the latest phase at Puerto Madero, where the old port buildings have been redeveloped into shops, flats and restaurants, “Docklands”-style. I’m not a city-scape connoisseur, but I was impressed by the way in which they had used the character-filled old red-brick dock buildings to recreate Stevenage, through the addition of grubby concrete verandas and balconies.

One experience that we had promised ourselves was a trip to the Indian Restaurant. There are two Indian restaurants in Argentina, both in Buenos Aires, and Indian food is one of the tastes we have been missing from England, curry being our national dish and all. It wasn’t cheap, but it was definitely worth it. The proprietor is from Jaipur, but he has been in Argentina for about twenty years. He wins an award for the best quote we have heard in a while… “Argentinian taste in food is very primitive: Ten thousand years ago, man was throwing meat on a fire, and here there hasn’t been much evolution since then.” Actually we like the food here, but we will also look forward to another fine curry when we’re next down this way.