Cub camp this weekend.  We were trying out a new (new to us that is) local destination just outside the city of San Francisco; far enough away to feel like you’ve left home, but close enough to be able to pop back for the things we were lacking, far enough away that the parents don’t all show up to visit, but close enough that they can come and collect their own offspring when the event’s over.  It’s a good site for future reference; large grounds, with a perimeter fence, lots of trees, enough indoor space, and a grubby but more or less functional kitchen. It lacks drinking water, but knowing that for next time will save us a journey or two.  Big thunderstorm Saturday afternoon followed by rain till lunchtime Sunday curtailed some activities, but we still managed to make dens, take footprints, and fingerprints, do a treasure hunt, secret messages in lemon juice, some utensil-free outdoor cooking, and of course the ubiquitous football, and I also introduced French Cricket which they really liked. 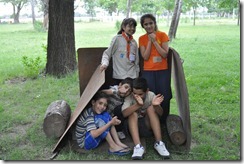 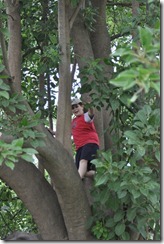 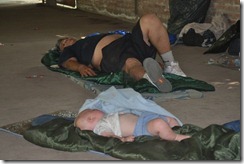 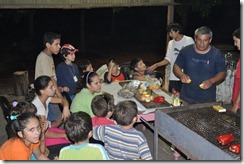 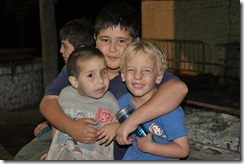 1. The main purpose of a probationary period is to ensure an individual’s capability, reliability and suitability for permanent employment. Our Probation Procedure will ensure that: 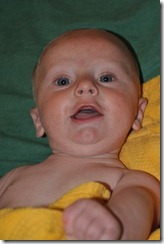 In recognition of your capability, reliability and suitability, your extraordinary progress made, and your one hundred per cent attendance record over the past six months, Frost inc. are delighted to offer you a permanent contract.  Please can you sign the enclosed in triplicate and return it to the Human Resource Manager at your earliest convenience.  Unfortunately this post does not include holiday entitlement, nor any salary beyond mashed banana.

That’s probably the one we’re looking for

News round, round up… I was watching Country File the other week (we watch the BBC sort of semi-legally-ish), and spotted John Craven.  Made me realise just how young he must have been in those 70’s days of the Newsround when I was seven and thought he looked really old.

So what else is news…

We spent an arm and a leg servicing the car on Monday, and it died in the middle of nowhere on Tuesday, but appears to be fixed again now; it didn’t die today anyway.

After several weeks, many phone calls, and two trips to Cordoba, Martin finally managed to track down a prisoner he’d been looking for.  The prison service turns out actually to have a computerised data-base, but it appears that it might not be anyone’s job to keep it updated or checked for accuracy, so we were variously told that the guy was in a prison in Cordoba, a prison in Cruz del Eje (three hours beyond Cordoba), or had been released.  A phone call to his family ascertained that he was in fact in the other prison in Cordoba, which is exactly where Martin thought he was in the first place, but not one of the options suggested by the official system.  They managed to meet last Monday.  Another ex-prisoner friend reckons that sometimes people die in custody and simply “disappear” from the system.  I’m not in a position to comment, beyond observing the ease with which “the system” manages to lose even the living, apparently without trying.

Having finally had my degree certificates returned from the British Foreign and Commonwealth office, apparently the next stage in the marathon confetti chase, is to be revalidated as having finished secondary school.  A check on the Argentinean government website says that this needs to be done in the locality where I am resident.  So off I went to the local ministry of education this morning.  “Why do they need your secondary certificate if you have higher education qualifications?”  Do you know, I have wondered the same myself, but since this is your country’s ministry of education not mine, perhaps you’ll take it up with them for me.  “You’ll need to get an appointment and do this in Buenos Aires”.  Au contraire… luckily I’d printed out the webpage and brought it with me; it says here that I have to do it in the locality where I am resident and that’s here.  “hmm… we don’t see many of these…” No, I’ll grant you that much “so I’ll need to find out what we’re supposed to do, can I get back to you?”  How about I come again on Friday?

In the interim I’m busy doing stuff with the special school when the kids show up, and when the car doesn’t leave me stranded by the road-side, and when the teachers aren’t cancelling classes in order to have a meeting instead.  Routines seem a lot more precarious here somehow, but I’m enjoying it when it happens, and for now, the school have got me for next to nothing since I’m not officially qualified to do anything!

Right now I’m planning the programme for cub camp in two weeks time on the theme of detectives, so we’ll be playing with invisible writing and finger printing, all cloak and dagger; or as cloak and dagger as it’s possible to achieve with a bunch of over-excited eight year olds anyway.

Yesterday we marked our seventh wedding anniversary.  Actually I just turned up an article that suggested that marriage length for a male banker is barely above half the national average; 6.7 years compared to 11.5, so maybe it’s a good thing I changed his career and dragged him off to Argentina after all. (The same article suggested that 23.4% of male bankers wanted custody of the children while 67.3% wanted custody of the family dog instead.  Now, come to think of it…. no, best not go there….)

We’d planned to go out to our favourite spit-n-sawdust local bar, leaving Joni in the capables of our house-mates, and hoiking Danny along to play gooseberry, but at the last minute the gods decided to smile upon us, and Danny went to sleep, so he was unceremonially plonked into his cot and we ran away for the evening for the first time in six months since he was born; hoorah.