Halfway through January already!  Here are a couple of updates on recent stories for people who have been following via blog or newsletter or both.

We won one fight; our Scouts have been given use of the municipal bus for our summer camp in February.  That has been an ongoing saga since the local council agreed to provide the bus way back last July, and then out of the blue at the start of December tried to withdraw the offer by claiming that it was never made.  For a month we attended the council offices almost every day, and were passed from pillar to post, fobbed off with promises of meetings and phone calls, which mostly didn’t happen.  So finding ourselves in January and no further forward, I took charge of things and decided to finish the job once and for all.  We had nothing to lose, and even a big fat no would be progress in that it would be a proper answer that we could move on from.  So I rolled up my sleeves and went to war and after two fairly frank meetings, we had a bus.  So now we are finishing raising the funds.  Tonight we have a folk evening, known as a peña in Argentina, so we have been hard at work all morning, and will continue working hard until the wee small hours tomorrow, hopefully with a goodly haul as a result.

Teen’s paperwork is still an ongoing battle, to the extent that we couldn’t even register the baby.  Teen is missing from the care system but at least she does have an ID card albeit out of date, whereas Baby doesn’t officially exist at all and won’t exist until either Teen’s situation is progressed or Boyfriend regularises his immigration status – he has temporary residency which ran out last June and apparently renders him incapable of fathering a child (go figure!).  He won’t be able to move his case on until March because the relevant office is on holiday till then.  Meanwhile Teen is making progress, Baby is thriving and has put on 300 grams this week.  I suspect we need to be driving a difficult balance between applauding Teen’s progress and pushing her to do more; together with knowing when to get involved because they need our involvement, versus when to stand back and let them figure things out for themselves because they need to do that too.  Good news is that Teen has mentioned that she would like to go back to school this year, we weren’t even broaching the subject at this stage so we were surprised and thrilled to hear it.  So over the next month or so we need to be thinking together and finding out what sort of support might be available to facilitate that. 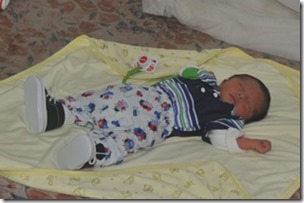 An unmarried teenage girl of uncertain parentage gives birth in poverty and his own compatriots did not receive him.  It has been an interesting Christmas in our house.

Foster Teen’s baby, Lian Piñero Zambrano made his appearance nearly a whole month ahead of schedule, on the morning of the 23rd of December.  Mum and baby were discharged on the 24th.  I questioned this at the time as it seemed to me that he wasn’t feeding properly, but the public hospital were keen to send everyone home for Christmas so home we went.  Sure enough on Saturday 26th he was readmitted to hospital suffering from dehydration and having lost a significant amount of weight.  Since then he has been in the neonatal unit where they have been getting his weight back up, and working with baby and new mum to improve his feeding.

Fortunately Christmas in Argentina is a simple affair.  Half an hour’s buzz round the shops on the morning of the 24th gathered me enough loot for presents for all children.  For the main celebration we get together with friends and throw some meat on a fire.  Martin bought meat and drinks while I rooted around the house and located enough ingredients for a couple of salads, and the kids and I made a cake to share for dessert. 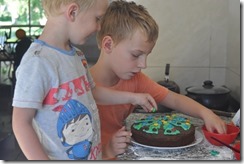 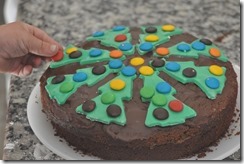 Since then the week has been filled with zipping backwards and forwards by bike to the hospital several times a day and trying to coincide with times that they need someone to look like a “responsible adult” to meet with social worker, psychologist, psychiatrist, paediatrician…  Sometimes this is tricky when meetings don’t occur at scheduled times.  Technically Teen is still the responsibility of the Province of Cordoba, who appear to have mostly washed their hands of her since losing her paperwork, but without giving us any legal basis for doing anything on her behalf, and particularly not enabling us to claim any of the benefits that she should be entitled to, neither for herself, nor baby Lian who by accident of birth also finds himself without legal status.  So it lands to a couple of not-particularly-wise people from a far off land in the east to provide not myrrh and frankincense, but food and shelter for those who find themselves excluded in their own land.

“He came to his own, but his own did not receive him.”

At the moment they are talking about sending him home on Monday, so we celebrated New Year with another hospital visit, and then went home and put together another cake with the chocolate numbers that I had made using some funky new number moulds. Simple pleasures.  Happy New Year. 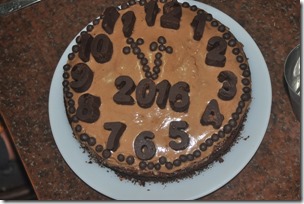