Sometimes it’s a treasure chest.  Or a pirate ship.  Or a knight’s helmet. Or a television.  Or a shield.  Or a castle.  Or a bed for a stuffed toy.   With seven of us in the house, I try to buy most of our non-perishable groceries from the local wholesaler, from which a useful by-product is a regular supply of cardboard boxes.   Today’s little project was a  puppet theatre:- 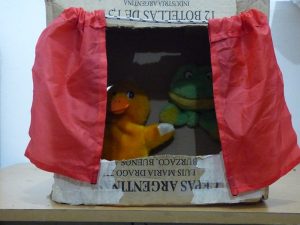 There had to be two curtains, and they had to be red.    And to any of those professionals who have diagnosed short attention span, you miight be amazed at just how long he can concentrate on silly renditions of a frog and a duck singing “the grand old Duke of York”.   “Again… start the puppet show again…”

Imagine a UK city centre where you could take your kids out for icecream at midnight and not find yourself dodging drunk youths, or drunk middle aged wannabe youths.  Sunday night here was the first of a series of “peatonales”,  means pedestrian street.  For a few Sunday nights  every summer they shut the city centre to traffic and folk come out for a party.  It starts at 9 or 10 in the evening, when the temperature drops to the low thirties, and carries on into the wee small hours.  There’s live music to various tastes and ages, a bunch of craft stalls, folk selling food, street entertainers and all the centre eateries are open.  We went for icecream and a mooch, finished up playing in a plaza at one in the morning, and that’s where I found myself musing on what a nice atmosphere it was, and wondering if it would even be possible to do this in the UK without putting up signs warning people to beware of the vomit slicks.

We burnt the candle at both ends because monday morning we had to be at the munical medical facility before six in order to do the annual medical paperwork for school, sports clubs and scouts.  Doors open at six, by which time there were half a dozen families queuing in front of us and many more behind.  When the thing finally gets going I’m reminded of Adrian Plass’s phrase from another context, “explosion in a jumble sale”, with queues snaking in all directions, throngs of people milling around not sure which queue they’re supposed to be in, and at least half the people in any queue not sure what they’re queueing for.   The game is to collect signatures from a dentist and an optician, be weighed and measured by a nurse, update any outstanding vaccinations, and then take all the pieces of paper to a paedriatrician who completes the final checks and signs off the form.  Last year I managed to avoid the municipal dentist and optician by making those appointments privately.  That isn’t permitted this year, so we had to endure the whole package.  The municipal optician has a progressive motor disability.  It is great that they keep employing him where a more cut throat set up might have put him out to grass a decade ago.  However we are now at the point where he could really use a dynamic assistent.  His speech is hard to understand, and his body doesn’t allow for much gesticulation, so he makes a brief futile attempt to explain what he wants the kid to do, gives up and signs the form.  So if you actually want to know whether your child can see, you’re going to need to make that private appointment anyway.

Danny objected to being asked to help with setting the table, so I went into an explanation of how everyone is part of the family, and we all have to help with doing things for the family.    “I’m not going to be in the family any more”   He decided.   Not quite the intended reaction, so I went into another explanation of how not being in the family means going to live on his own and looking after himself and making his own food and washing his own clothes.  “So, where are you going to live?” I concluded.  “On the patio“.    “And what would you eat?”   “Carrots“.    Rubbit hutch out of a cardboard box for our next project?