Skip to content
We’re at that time of year where everyone’s coughing and sneezing and if you haven’t already got the black death it’s only a matter of time before someone gives it to you. Argentinian colds seem to be particularly evil, or maybe our puny little English defense systems just haven’t developed the appropriate antibodies yet. 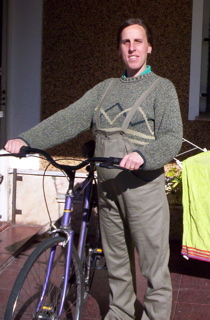 This baby has a lot to answer for, I had to take my bike in to the shop this week, and have my beloved racing-handlebars swopped for some upright ones because I can’t reach down to the brakes any more, which was starting to feel like a bit of a safety hazard for doing business with Cordoban drivers! So now I’m in “granny-sit up and beg” mode, but at least it means I can keep cycling for a while longer, hadn’t anticipated that consequence to my increasing fatness. I’ve also just bought a pair of dungarees, after completely running out of clothes that fit me.

I’ve got a side-project on at the moment trying to organise a wheelchair for a little boy in San Marcos, not directly connected with the children’s home, but a family of limited resources and a lot of kids, one of whom has cerebral palsy. He’s seven years old and his mum has to carry him around everywhere. She’s been trying to get a chair officially through their local services for ages, but Argentina is based on who you know, and who they know, and if you don’t have the right people then the “official” channels are arduous, bureaucratic, and often lead to dead ends anyway. A friend of mine managed to wrangle a wheelchair for someone else a few months ago in Cordoba, so I’m trying to go through the same sources and I think we’ve now got a basic “yes” in principle. I had to go back and see the family this week and weigh the kid, take a full-length photograph of him, and a photocopy of his certificate of disability etc etc, but it’s looking hopeful.

Stuff moves slowly here, and there’s no joining up between services. In the hospital where we visit, there’s a guy there at the moment who’s had his leg amputated, but no-one’s actioned anything on him getting a prosthesis. Apparently the patient’s supposed to take responsibility for organising it, except that he’s currently in hospital having had his leg chopped off… and round and round we go. I guess it’s not a great deal different to the UK; on paper we have “equal entitlement”, but in real life, the rich and articulate are able to access services, and no-one else really exists unless they chance upon an advocate with the right contacts who can argue for them.