Skip to content
… income tax and morris dancing.
The tax office, the beloved tax office. Martin logged on to the tax office website and thus discovered that he had been re-designated as the owner of one “Saffron Indian Cuisine”. We don’t know where Saffron Indian Cuisine is, which is a shame because we’d like to call in for a meal, since we apparently own the business. Meanwhile we applied to calculate my tax online. My pin-number arrived promptly through the post, to my house, with all the correct details, apart from the small oversight that I had been renamed as a Mr CD Jones. Pro-ID-card campaigners used to suggest that people with nothing to hide would have nothing to fear from ID cards. Clearly this is not true for as long as government computer systems continue to perform these spectacular identity mix-ups with such inevitability. 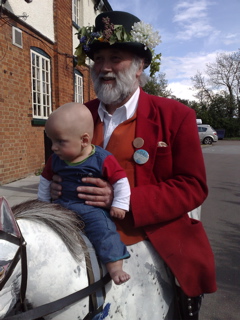 I had forgotten it was May Day today. We were having a quiet pub-lunch with some friends, when a man dressed as a tree appeared at the bar. He was closely followed by the Offley Morris men, complete with bells, flowers, sticks and the ubiquitous handkerchief. Close inspection under the floral hat revealed one suspect to be the father of my friend from childhood. So we swopped family yarns, and Joni rode on his horsey. May Day is a big day in a Morris dancer’s calendar. They start at sunrise and drink… er… I mean dance, in a packed and varied itinerary of locations throughout the day. So they downed a swift pint and performed four dances in the car-park accompanied by accordion, fiddle and a lot of banter, before moving on down the road. I explained to Joni that this fine tradition is part of his heritage, should he choose to accept it. Question is, how am I supposed to explain it for our Argentinean readership?