Having been more or less continuously involved in the Scout and Guide movement since becoming a Brownie at the age of seven, (until I finally drowned in bureaucracy and gave up attempting to lead the Ranger unit under a District Commissioner who was particularly pro-bureaucracy and even more anti-Ranger) we are happy to report that cub-camp in Argentina looks quite a lot like cub-camp as we know and love it:

Some of the younger members struggling to take the pace.

The one thing I have definitely learnt from this camp is that single sleeping bags are only made for one, no matter how small the other occupant might be. 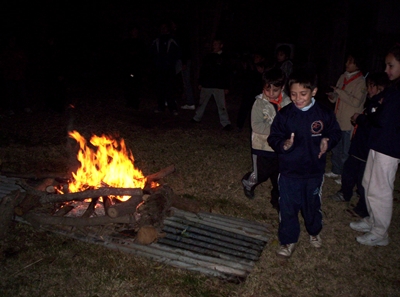 The traditional campfire begins with a rendition of “Campfire’s burning” in Spanish, continues in familiar format with songs and sketches (even recognised some of the sketches), and ends with wait for it… Auld Lang Sine in Spanish, couldn’t believe my ears!

I think this weekend may have been valuable in establishing myself as part of the leadership team here. I certainly detected a warming of relationships, which may be because the other guys have now seen that I can organise a game, provide sausages for twenty five and light a fire, and that despite my European roots I am not too posh to clean a toilet. There is of course also the rich gelling factor of swopping yarns over mate at two in the morning while waiting for the last of the little sh….s darlings to run their batteries down and at least pretend to go to sleep. And now we’re home, stink of campfire, and completely knackered in that satisfying way that only a weekend in the open air can provide; all told, a top weekend.