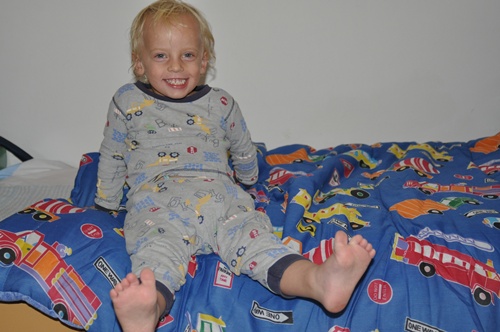 This is a pank end. A what? A pank end. What do you mean you don’t know what a pank end is?

Essential modules omitted from the prenatal advice; dressing a moving target, reasoning with a two-year old, and how to develop the gift of interpreting toddler-speak. The interpreting thing takes on an increasingly urgent quality when two-year old teeters on the edge of dissolving into ball of human fury unless parent comes up with the goods forthwith. Once tipped past the point of no return, high decibel screaming ensures that the chances of understanding will be even less than they were before tantrum ensued. It took me quite a while to figure out that “No pank end, no pank end, NO PANK END AAAAAARRRRRRRGGGGGGHHHHHHH” actually means “I don't want a blanket thank you mummy” and that the definition of “blanket” itself will include any kind of bed-covering whatsoever.

Personally I don’t care if he has a blanket over him or not, despite all the people here trying to convince me that he’ll die of hypothermia in the night or pneumonia shortly afterwards. However, I do care intensely, albeit from purely selfish motives, about the bit where he wakes up cold at 5 in the morning yelling “make it the bed, make it the bed” until mummy crawls out of her nice warm pit to sort him out.

So, mummy went shopping for a new pank end, alias thinnish quilt-type thing, bit like a duvet only not quite, (they don’t have duvets here) with lorries and police cars and buses and diggers and most bases covered for a two-year old transport obsessive. I’ve put it at 90 degrees to the mattress (he’s short so he doesn’t need a whole bed length) and tucked the excess length right under the mattress on one side, so he can toss it back, without throwing it off completely. And he loves it. We’ve had a few little naming rituals where we go through and claim dominion over all the vehicles we can see. And more importantly, we’ve now had two nights in a row where we haven’t seen him till 7 in the morning. Hopefully there will be many more where those came from.