Argentina is 200 years old today, which feels like it ought to be quite a historic moment, but it’s actually quite hard to feel a sense of history, not least because mostly the news has been filled with politicians talking not about the events of 1810, but squabbling like school children about the planned events of 2010. It starts to become clear why inflation here is currently at around 25% when the people supposedly running the country show themselves to be incapable of organising a picnic on a bank holiday. However, if you want to know about the more interesting history, try here, and if infantile politics is more your thing, most international news channels are carrying this summary
We on the other hand came to our own multilateral agreement of a completely different nature. Martin from a different sector of society was brought up to believe that accommodation starts with three stars. We, having more recently swung down from the trees, wouldn’t have known what to do with a hotel even if our parents had dared to take us to one. So, the Frost-Cant coalition has bought an edifice with two rooms, big enough to stand up and walk around in (Martin), with a mini-bar and room service (OK I lied about that bit, but only just), while still being unmistakably a tent (Hazel). And we piled it, ourselves and our dogs into the car, and went to pick up friend Sergio’s girlfriend and daughter (8), thus demonstrating the tardis-like capacity of a Chevrolet Corsa. We were even still legal; five bums on seats, two dogs in a dog-crate in the boot, and camping equipment packed into every other available air space. Sergio went on his bike! And off we went to Carlos Paz for three days.

Carlos Paz is the first half-way attractive place out of Cordoba. We thought being touristy there would be lots of campsites to choose from. Apparently there used to be, but the local municipality decided they wanted the land back, so now there’s only one, correspondingly overpriced, but none-the-less very pleasant, safe for the kids, and at this time of year, mostly empty. So we had our first family camping experience, and Sergio’s family had their first family camping experience. The little girl is an only child, and luckily seems to enjoy the novelty value of adopting a two-year old every so often, so the two of them had a whale of a time, playing on the swings and slides, testing the functionality of Martin’s new air mattress;

Hiding in the trees; 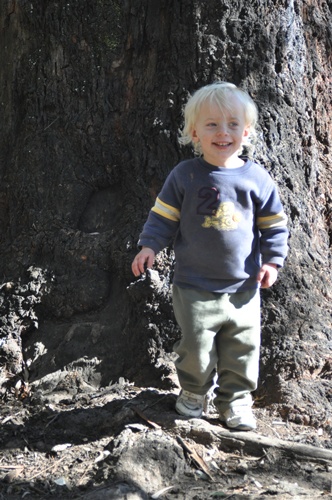 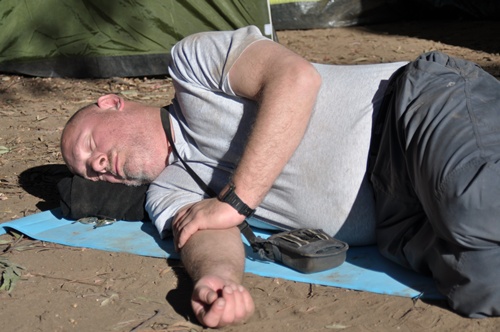 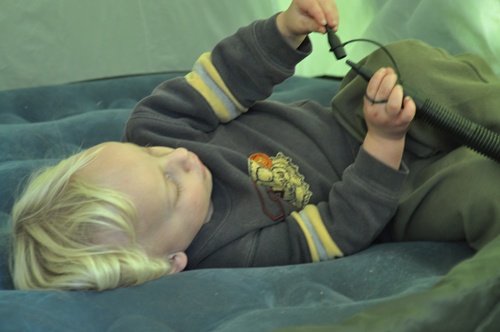 Lots of Sergio’s friends and relations live in Carlos Paz, so we had visitors most meal-times. 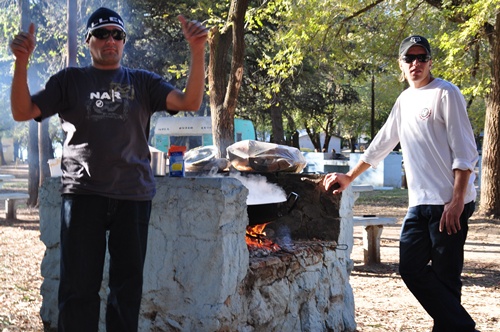 And then we shoe-horned ourselves back into the tardis-sardine can and went home again, where the washing machine is now working overtime. All in all, highly successful; even Martin said that he would be happy to repeat the experience, despite the cold nights and f-f-f-freezing mornings.