It’s been raining for what feels like forever, but maybe is only three days or so, so far with more predicted for the week ahead.  There’s washing drying everywhere, the roof’s developed a new leak in the office just over where Martin’s computer normally sits, and the car has died a hopefully temporary but possibly expensive death. This was maybe not the best day to find out that Corsa engines suck their air in from the small amount of usually-air-now-filled-with-water-space between the undercarriage and the road.  Whoever thought that was a good plan Mr Corsa?

Dwelling on more cheerful moments, it was Joni’s third birthday the other day, with all the sending a cake to nursery and usual three year old birthday gubbins.  On his orders At his request I did him a train, loosely based on Henry who’s one of his current favourites.  I’m not sure the likeness was immediately apparent, but hopefully being long and green were good enough clues.  He received lots of good presents, both from the UK and here, and he seems to have been happy with his day… he asked if he could have another birthday yesterday anyway! 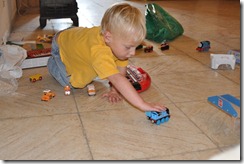 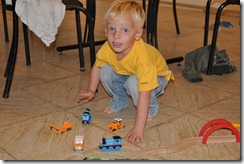 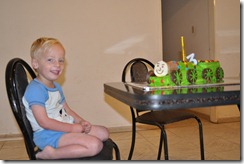 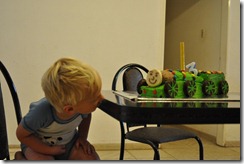