Working on developing alternative communication strategies with the kids at school, in the context of watching my non-disabled off-spring multiplying his verbal skills, I’m beginning to think that any child who learns to communicate ought to be awarded a PhD just as a matter of course.  Before we even start thinking about planning the content of any message, we must already have some concept of the nature and purpose of communication in order to be motivated to do it in the first place.  Following that, if we are to successfully convey even the simplest idea we first must have the ability to attract and maintain the listener’s attention, and if we have any intention of allowing our partner to respond to us, then we also have understood something of the rules of reciprocity and turn-taking.  And this is just to start with, it only gets more complicated from here as even the most trivial exchange is laden with content and choices to be made;

– Look Joni, where has Wibbly Pig put his banana skin?

In a three word response my toddler conveys that he knows that I’m speaking to him, that I’ve asked him a question, and that he clearly understands the content of that question; “where” requiring a location-based response, as well as who – Wibbly Pig, and what – the banana skin.  He also selects the correct preposition, the correct possessive pronoun, demonstrates that he can match nouns to parts of the body and arranges the words into their conventional order, all in the split second between my asking and his answering.  And of course this is but one of hundreds of exchanges in which he will participate in different contexts, with different people during the course of every day, in his case, in two languages.  And all this in a much shorter time, and frankly with a lot less fuss than most people take over their doctorates.

My little friend from the village did me proud this week.  When I first started working with him over a year ago, I created a set of cards containing photos of key family members, pictures representing the animals on their small-holding, and some others relating to everyday objects that I thought he might find motivating; biscuit, drink, football etc.  We looked at them a few times during my visits to his house, and then this year he went off to school and I stopped having much real input into the content of his schooling.  Now I’m in school at the same time as him for two days a week so the other day I fished out the cards that I had put away in a drawer, took them along to school, and scattered them on the table in front of him to see how he would react; 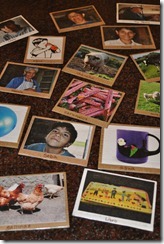 He carefully picked up each card and examined it closely, made the relevant animal noises for each of the farm pictures, pointed to the different members of his family, and finally selected the biscuit picture to give to one of the members of staff sitting next to him.  Thus he drew himself a little crowd of other members of staff all wanting to see what he was doing, and then asking him about the different members of his family, and the animals on their land.  It’s the most interest I’ve ever seen him take in any table-top activity so far, and the most interest I’ve ever seen any of the staff take in him.

I’m trying not to lay my opinions (professional or otherwise) on with a trowel at the moment having already nailed my colours to the mast a couple of weeks ago as far as school is concerned, but I really hope that this little event and my little friend’s demonstration of his abilities might have opened the way towards some radical new ideas here; like this kid has potential; it is worth trying to teach him; many non-verbal kids do have something to say; it is worth the effort to help them discover and use the right materials to say it with; home-made resources can be just as good as anything high-tech or imported…  Now achieving that would be a real triumph for both his and my non-verbal communication.  Doctorates all round?