The butternut-squashes are threatening to take over the world, the melons are following close behind, while the tomatoes are clinging to life, and the peppers have just about given up the fight.  Apparently it was a dry week in San Francisco, and I forgot to leave plant-watering instructions.

We on the other hand are sun-tanned, tired, and thoroughly pleased with our week on Scout camp in Rio Tercero, which was spent in traditional Scout-camp fashion.  From playing in the river; 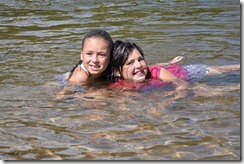 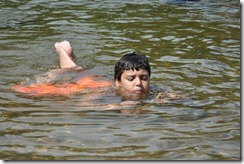 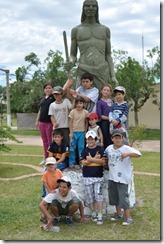 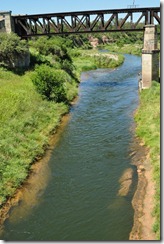 To learning about the local wildlife; 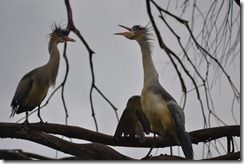 To chores and activities around the campsite; 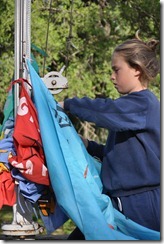 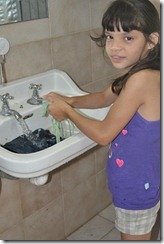 And many other hearty Enid-Blyton-approved activities (bring on the ginger pop).  The balloon-powered cars weren’t an unqualified success; the relatively clinical conditions of our office floor proved to be quite difficult to reproduce in the middle of a field.  However, one child did manage to make his work, so we at least proved the principle, and we enjoyed a water-fight with the balloons afterwards so it wasn’t an entirely wasted effort.

Joni has pretty well learnt to swim, if you’re OK with a tendency to go backwards (aspiring to be a squid or something), and the Scouts enjoyed introducing him to the age-old art of rolling down a grassy hill; some activities transcend national boundaries; 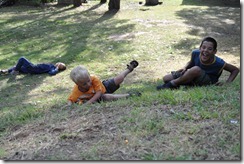 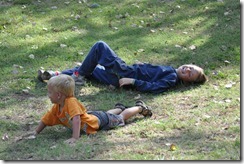 And now we are back to reality.  Summer scheme carries on as normal for me… continuing the theme of children and water, just in a different context.  Joni is back at nursery.  Some idiot yoof crashed his motorbike into the side of our car yesterday, so this afternoon involved a trip to the insurance company and the filling in of relevant paperwork (Form 64f “accidents involving idiot yoof”).

We followed the trip to the insurance company with a possibly not very fruitful trip to the local convent on behalf of one of the local beggars who we are building a relationship of sorts with.  “Where you from? … Why we not speak in English?” – Mother Superior turns out to be from India.  We had to sit through half a mass in order to get to meet her.  Mass was held in a peaceful, simple, white chapel, accompanied by two acoustic guitars… it did cause us to wonder whether it was worth converting to Catholicism.  Despite our begging house-caller’s insistence that the nuns wanted us to go and speak to them, they themselves appeared not to know who she was, so I’m about to attempt some written communication, using her as postman to try and find out if we’ve got the right nuns, if she’s telling the truth, if they’re trying to get her off their backs, or if there’s some other misunderstanding… could be anything, complicated by the fact that she’s illiterate.  All in a day’s work.