I’d just arrived at church a couple of weeks ago, when I was approached by a lady who I don’t know too well.  “I need to speak with you afterwards” she said, completely poker faced.  I spent the whole service wracking my brains to try to imagine what sort of trouble I might be in; like who I’d managed to offend and how.  Guilty conscience?  Quite probably, except that I don’t actually have very much contact with church folk outside the meetings, and even someone of my fine talent usually needs at least some sort of open communication channel in order to cause offence.

The service finished and my judgement beckoned.  “The ladies of the church have decided that we’d like to hold a baby shower for you, and we’re going to have it in your house.  Is that alright?”  More than alright, I’d be delighted. 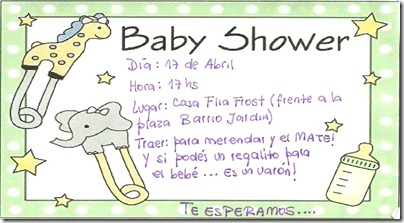 Sure enough, on Sunday afternoon they all descended, bearing gifts, balloons and cake.  Martin stuck his head round the door and muttered something about “too many women” before locking himself into the office, so Joni was the sole male representative.  Happily someone had even brought a present for him (Scooby Doo T-shirt) which more than made up for the slight anti-climax of discovering that the other parcels were full of nappies and baby-clothes.  It was a really nice event, I wouldn’t want my house like Piccadilly Circus the whole time, but I do enjoy filling it with people once in a while, especially for something fun, and even more especially when someone else has done most of the hard work.  I was really touched that the good ladies had hatched their plot; my perception is that we’re off the radar of most people most of the time, particularly since the projects and work we are involved in tends to be more community than church-based.  This is all fine, we’ve set our priorities according to what we think is important, and we’re here to serve rather than be served; but at the same time, it is kind of gratifying to realise that folk have not only noticed us, but also appreciate our presence in some way.

So now we have a fridge full of left-over cake (vying for space with the watermelon), and just about everything we need for B2F’s arrival.  Still required will be a little mountaineering expedition to rescue the dusty cot from the top of our wardrobe and put it together, and to take a cold look at the old pushchair to decide whether it is fixable, and who we might call upon to fix it.