If I said I was putting my baby in a cage for safekeeping, I would have social services pounding on my door faster than I could say “politically correct”.  But pad the top, chuck in a few soft toys and call it a play-pen, and everything’s just fine.  Semantics is a strange beast. 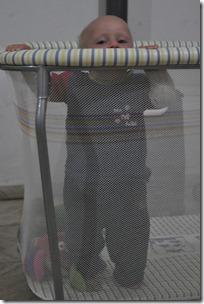 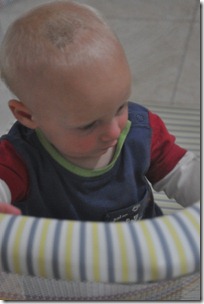 The reason for the cage uh play pen, is essentially that where Joni’s most trying feature as a baby was that he couldn’t self entertain, Danny’s most trying feature is that he can and does.  Places where he has been found to date include stuck behind the computer trolley, escaping down the front garden path, under the car in the garage, and shut in the bathroom.  He adores Joni, but he drives him crazy trying to join in everything that his clever big brother does.  And then the duet of screaming drives me crazy too, hence the play pen (it’s for me to hide in really).  And since he can’t walk yet there’s almost definitely worse to come.

Meanwhile Daddy and Joni are very proud of their homework tonight.  It’s the second piece since starting school (Joni that is, Daddy doesn’t remember how many bits of homework he ever had since he never did it anyway).  This time it was make a paper aeroplane and write your name on it so I’m thinking that nuclear physics might still be a while off, but he’s pretty good at joining dots to spell Jonathan.  Levels of chaos meant that it was nearly put off till tomorrow morning, except that Joni cried because we hadn’t done it.  When he’s 14 we can remind him about the time he cried out of keenness to do his homework.

And on a totally un-related note, our car has now been recovered three times by tow truck in the last two years including twice in the last six months (one of which was yesterday, grrrrrr), not to mention various occasions that the garage round the corner has had to come and pick it up to replace starter motors and fuel pumps.  It has now won itself the accolade of being officially the least reliable car that I have ever owned.  This is quite impressive because it is also the newest and the most expensive.  And I have owned some real heaps as anyone who ever saw that Metro would testify.  In fact this one is still only six years old; I have never owned a car that was younger than 10.  But of course this one was made in Argentina.  At the moment there’s a big hoo-ha going on because President Cristina Kirchner is seriously restricting the flow of foreign goods into the country, which is particularly affecting car and bike parts, and electronic goods.  The hoo-ha isn’t because stuff isn’t available locally, but because locally made products are of such poor quality that even far eastern trash is generally preferable.  Hey guys, since it appears that we’re all in agreement on this, might I make a suggestion….??