Gratitude is a strange beast.  There are so many things that I don’t realise I was grateful for until there’s a goat in the room.

Not exactly a goat, but I am deeply grateful for all of those days that I didn’t find a scorpion in my bathroom.  And since I found one, I have become fully appreciative for every scorpion-free toilet experience.  I didn’t take this photo, but our local scorpions look like this; 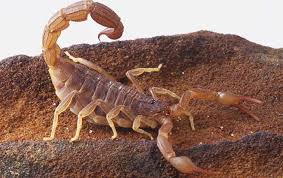 They’re called alacranes, and apparently they are particularly common in this area, although until last week I’d never seen one in my house.  We’re told that the local hospital deal with stings all the time, because alacranes like to hang out in bathrooms (they come up the drains), which is where people are more likely to have bare feet, and to be wandering around half asleep in the middle of the night not looking where they’re walking.  There are some things that still make me feel very foreign, and I am aware at the moment that I definitely haven’t had my identity shaped by the prospect of sharing my living quarters with venomous creatures.  My kids will probably learn to take it for granted.

Still not a goat, but something else I used to appreciate without even realising it would be bathroom walls.  Our house is quite open plan. It is one of the reasons why we chose it, being airy and light, and having easy access between different areas.  But I had never really considered open-planning the bathroom.  At the moment this is the view from the bathroom into the office; 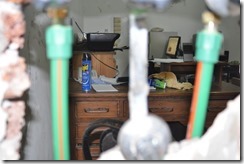 And this from the office to the bathroom; 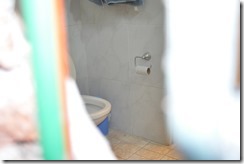 Our comedy duo have promised they will be back to patch up in a few days time.  I expect we’ll have to chase them to make it happen.  But I promise I will be grateful as never before.