– The Highway Rat, by Donaldson and Scheffler, one of Danny’s all time favourite books. 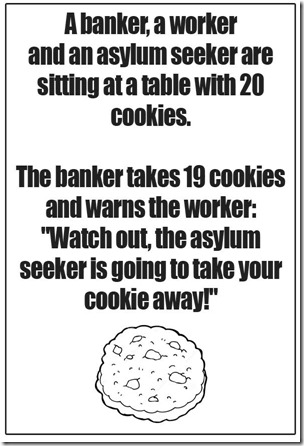 I like that.  I want to add not all bankers, not just bankers, anyone who is making shed loads of money at the expense of ordinary people, and (probably more importantly) not paying the corresponding amount of tax on same, vis. 23 billion pounds missing to the UK economy from 700 named companies.  And then the other side of the coin, the propaganda machine run jointly between politicians looking to pass the buck, and overpaid owners of tax-avoiding media corporations playing the fears of their readership by selling an easy story.

I continually feel like I’m nibbling at the edges and not having enough impact on the real issues of justice and injustice.  And as for unknotting the macramé between culture and injustice…  There’s a blog in there but it keeps threatening to turn into a book and I don’t have time to write one of those for the next umpty years and I will probably never be able to afford to do a PhD.

Meanwhile on small injustices closer to home, I received a phone call from the Teen hostel yesterday morning to tell me off for a whole bunch of things and to tell Teen off for a whole bunch of other things, none of which appear to be justified.  So we went to the hostel yesterday afternoon, which turned into a repeat of the same unhelpful conversation that we had already had by phone.  So I tracked down the psychologist this morning.  She is helpful, and she attends the hostel but she’s not employed by them, so she’s inside but outside, and she promised to kick ass in the nicest possible sense on our behalf.  The interesting part once I stopped being annoyed, was reflecting on how I found myself absolutely coming out in defence of Teen and what I perceived to be injustice directed at her.  Until now it has normally been us seeking outside support to deal with her colourful behaviours.  So that’s good, apart from the injustice part.

This afternoon I set off to locate our favourite / least favourite bag lady.  She comes and annoys me, so I give her things to stop her from annoying me.  And then I’m annoyed because she comes back and wants me to give her more things to stop her from annoying me.  I am challenged to move this relationship onto a different footing by getting to know her.  This might be tricky because I think she’s used to the world being annoyed with her and she knows how to make that work.  I found where I think she is currently staying, but either she wasn’t there or wasn’t answering.  So I plan to go back another day and take cookies.