We had promised ourselves a couple of days in Miramar before schools went back.  First the car broke and then there was a whole hospital thing going on, so the plan got shelved until Joni decided we should set a date and I agreed to organise a camp for Easter weekend.  In the end, Martin’s leg is still open in several places, and he doesn’t love camping anyway.  The girls were in at playtime for skiving school, and for good or for ill I´m starting to get colder and harder about these misdemeanours.  So by default Joni, Danny and I won a rare and exclusive Mummy and boys trip out.

We discovered that the bus takes three hours, and the walk to our favourite campsite isn’t too arduous if you pack properly.  We made our own breakfasts on site, organised picnic lunches out at lunchtime, had icecreams in the afternoons, went out for something with chips in the evenings, and toasted marshmallows over a campfire before bed.  That’s all the major food-groups covered isn’t it?

There are a lot of birds around Miramar this year, water levels are higher than when we last went two years ago, and I enjoyed the big zoom on my camera.  We walked a lot, took photos, flew the kites on the beach, compared water temperatures between the lake; not too bad, versus the campsite pool; freezing.  I confess that twelve years in central Argentina has caused me to become wimpy about cold water although my kids are quite happy with it and they´ve never lived anywhere else so maybe it´s just age, darn it.  We went out on a boat one morning  as is our tradition in Miramar, and enjoyed walking across the top of the new water defences that have been constructed out of long mounds of rocks… Danny said “These ones don´t have a sign telling us to keep off…” Last time he saw a similar pile of rocks it was in England where kids are no longer allowed to risk scraping their shins… needless to say on this trip he went home very happy and sporting a new collection of scabs and bruises.   On Sunday we caught another bus back.  We did debate whether to stay another day while Monday was another bank holiday, but since we’d nearly run out of money, we decided it was time to go home and share Easter eggs with the rest of the family. 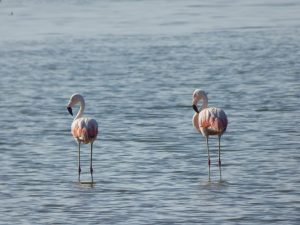 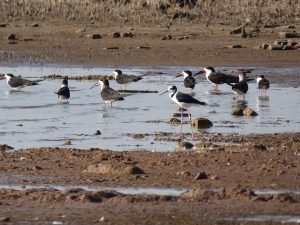 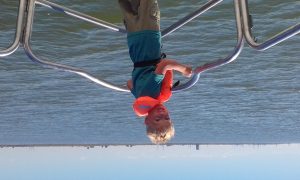