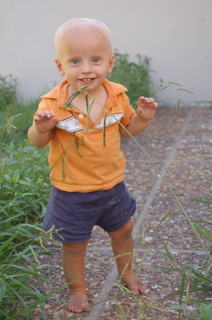 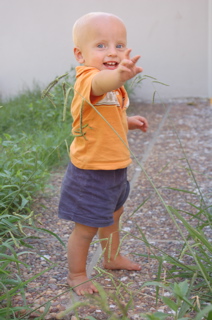 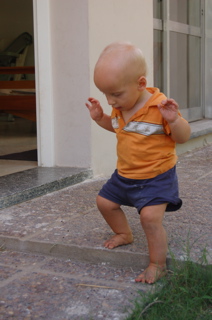 Big grown up baby becomes a toddler; Joni took his first independent steps at the end of last week. He is rather pleased with his new trick which is rapidly developing from “party piece to impress the neighbours” to “useful means of locomotion”. It is quite a performance; he pulls himself to his feet, grins around to make sure that everyone is watching, gives himself a little round of applause, and then sets off in an optimistic stagger.

Meanwhile, Mummy and Daddy are learning that not all silence is golden. Yesterday when it went ominously quiet, we found he had been busy unpacking the bags of fruit and veg shopping from underneath his pushchair, and he was located sitting on the floor surrounded by fruit, thoughtfully munching on a peach, which looked like he had probably sat on it first.