I had one of those conversations the other day… It opened thus:
“Everything OK for Tuesday?”
Me: “what about Tuesday?”
“The women’s meeting… (person) said you were going to be doing the teaching for the women’s meetings for the time being”

I really don’t mind doing the women’s meeting, I can even cope with not being consulted, but it would have been good at least to have been told… Welcome to Argentina. Thus I have initiated a series on “little known women in the Bible”, which will run either until I run out of women to talk about, or until the women of San Francisco become fed up with me and find themselves another teacher!

And thus another week has disappeared, filled with things, both expected and otherwise. 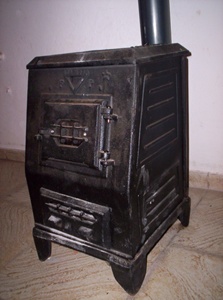 Our stove has been installed. This is a traditional wood-burning stove known as a “salamandra”. It heats our main living area very nicely and we are both getting more adept at lighting it. Martin’s first attempt involved a litre of diesel, which was dramatically effective, if smelly. One thing we are lacking is an axe, I did manage to split a log yesterday by wedging a tea-spoon into a crevice, but it is less than ideal.

After months of faffing, the community project in the village of Quebracho Herrado looks like it might actually be going somewhere. I have driven there four days this week for different reasons. We have rented a room, which from my point of view might not have been the highest priority, but having arrived at this point, now we need to furnish it as well as working on growing relationships in the community. I had a couple of families to visit this week, except that now I also have an unplanned trip to Buenos Aires this week, so the visits will probably need to go on hold again.

I planted a little lemon sapling at home, trying to fill the spaces that are currently filled with weeds, with things that don’t need lots of looking after and might give us useful produce. Am also hoping that it might provide some shade for the herbs when it grows a bit.

While Guides are rather thin on the ground in Argentina, (although they do exist), Scouts on the other hand are quite plentiful; there are three units that I know of in San Francisco, and these days they are all mixed gender anyway. In Argentina the Scout association is strongly linked with the Catholic church, which personally I wouldn’t have a problem working with, but it might have caused me to be cast into the outer darkness by some non-Catholic Christians around here. Fortunately, one of the groups here in San Fran is not directly affiliated to any church, so I made myself known to them and was invited to join. On my second week I found myself in charge of a cub-pack, which was a bit hairy since I don’t yet know the kids’ names. Luckily there were some stray venture scouts (called Caminantes) kicking around, who came and gave me a hand, and we all survived to tell the tale.

The last few days we have been entertaining Megan from Scotland, who has been doing her university language year in Cordoba. Today we went out touristing to a little place called Arroyito, whose main claim to fame is that it is the original home of “Arcor”, one of the biggest producers of chocolate in Argentina. It also has a nice river for walking and chilling out, and today we also watched the fire-brigade putting out a minor bush-fire near the river bank; there has been a drought for nearly a year here in Cordoba, things are pretty dry. Joni liked the fire engine, he has been practicing saying “nee-nor” to the pictures his Fireman Sam book!