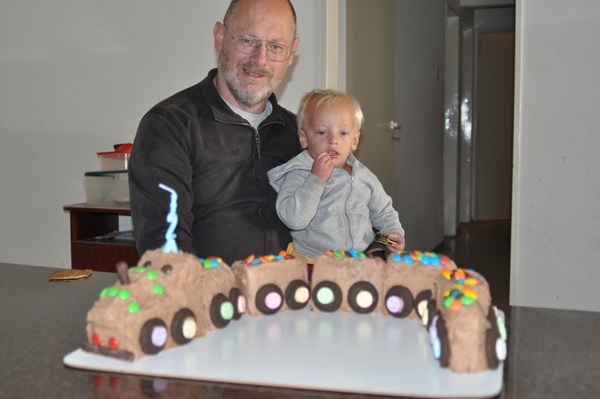 The nursery where Joni goes does birthdays on Fridays, and since he missed his week when we were in England, he had his turn this Friday. I made him a train cake which he seemed to be quite pleased with, he’s been saying “Joni cake train” at random intervals ever since, and he came home with toys, sweets and balloons. 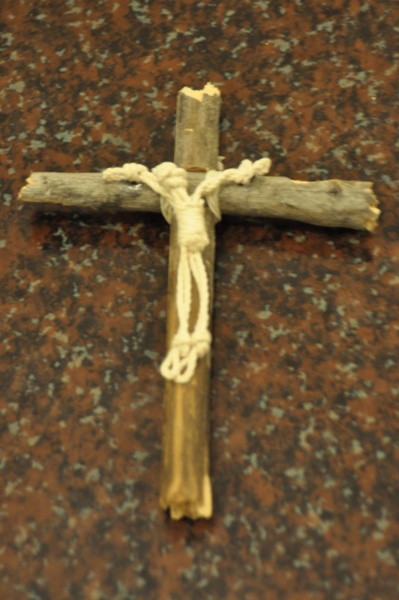 Saturday and Victor, our senior Scout-leader (an adorably grandfatherly type and a traditional Scout in all the best senses of the word) had made these string and wood crucifixes as presents for all the mothers among us for Mothers’ Day today (2nd Sunday of October in Argentina). Personally I think it is beautiful so it’s up on our bookcase, and we are offering odds for how many days might be allowed to pass before someone gently suggests that displaying such a thing might be taken as idolatrous by “real Christians”. We’ll tackle that one when we come to it.

Still in my Scout uniform and I had a hospital visit to do on the way home to see someone who (only just) survived her suicide attempt. It was a poignant visit, hard to know what to say, recognising that the standard “hope you get better soon” platitudes would be miles off beam, and particularly thinking about her and her four young kids on Mother’s Day today. Joni took one look at all the tubes and apparatus and recommended “nice sleep”, which was probably far more sensible than anything I came up with. On the way back I found myself singing the Adrian Snell song “Silence” from his musical “Beautiful or What”, where the voice of God character sings

And reflecting on how many layers of fallen world debris get in the way of knowing and believing what ought to be such a simple truth.