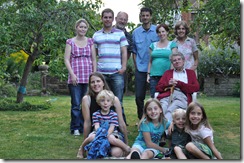 Having been nine in the house since we’ve arrived, and up to sixteen at various points during the weekend, it feels rather quiet with a mere five of us at the moment.  We should probably make the most of it though; the ever versatile Baldock Hilton will be back to eleven when the next wave of family descend on Sunday.

This week we’ve been meeting with a great new supporting church (new to us that is).  So far we’ve just seen a sample of folk over lunch yesterday, but if the advance party is anything like representative of the rest of the congregation, then we’re really looking forward to getting to know them.

When I became a parent I had a whole lot of lofty child-care-professional ideals which it is almost possible to uphold for six hours a day, but twenty four…? Today’s climb-down went:-

– How about these Thomas the tank engine ones?

And thus the “no brand named stuff” went off to join “no lying” and “no bribery” long since consigned to the nursing home of good intentions. 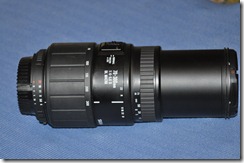 Second hand sigma 70-300 macro, seventy quid from the second-hand-camera-stuff guy on Hitchin market.  Cost new, quite a bit more.  Cost in Argentina, multiply by goodness knows what. Martin enjoyed testing it out for me the other day when we took the kids to play on the big slides at Knebworth park: 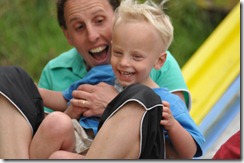