A year ago (blog entry Christmas 2010) I made a promise to myself that this year we would incorporate some family Christmas traditions, and particularly some that remember why we celebrate the Christmas story.  And so we have.

In Argentina Catholic tradition dictates that the Christmas tree goes up on December the 8th, which is apparently the day of the Virgin Mary.  I have no idea what connection she has with Christmas trees, and looking up the origins of Christmas trees suggests that they might be either Catholic or Pagan depending on which legend you believe (In fact about the only thing they couldn’t possibly be is Protestant since they existed before the Reformation).  But anyway Catholics and Protestants alike put up their trees on the 8th of December, and Joni was very excited about ours so up it went. 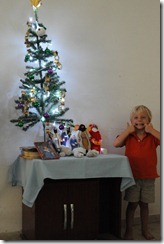 We’ve been decorating it ever since, with home-made paper chains, and gingerbread biscuits, and decorations made at school and nursery.  It might be finished in time for New Year or so, but at least some of what’s on there will be storable to give us a head start for next year, and it has kept us entertained for a few afternoons.

Under the tree are a couple of Nativity story books, and a wonderful hand-knitted stable scene which I picked up while we were in England.  Stable scenes are unreservedly Catholic here, often dismissed as “idolatry” by Protestants, so I can only assume that the thing that makes Christmas trees “acceptable” is that they might be of Pagan origin(!)  But anyway, we’re foreign so we can pretend not to know the rules, and our Stable scene is fantastic, means that kids can enact the Christmas story without breaking anything. 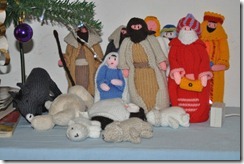 Our has had a couple of additional stuffed dogs added from the toy box for good measure.  And Joni has an interesting take on the Christmas story…. (appears wearing his wellies) I’m Father Christmas (sets out a rug on the floor) and Mary and Joseph have to come to my picnic and get presents….

Danny meanwhile performed a starring role in our church Nativity, for which most of the minor characters ahem(shepherds and the like… actually anyone except the family) had been replaced by dancing Santas. 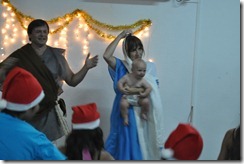 Joni thinks that celebrating Jesus’s birthday is a great idea:  We must have a birthday cake with “tomaties” (that’s smarties to everyone else – ed) and a candle and sing Happy Birthday.   And so together we made and decorated it. 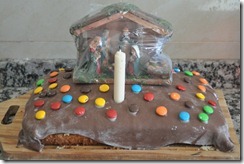 Tomorrow we may go to Mass in the morning (Protestant churches cancel their services if Christmas falls at a weekend).  And between now and then we will shortly be heading for the home of some friends in the adjacent town of Frontera, where we will see in Christmas in time-honoured Argentinean fashion; good liquor, good company, the gentle sizzle of cow on the barbecue, and fireworks at midnight.

And a merry blooming Christmas to you too.  Whatever your traditions, whatever your ethnicity, whatever your churchmanship, may we all know something of the real Christ who became flesh and came and dwelt amongst us.