This is a scan of the cover of the text-book that I was recently using to study language and literature for my secondary school exams. 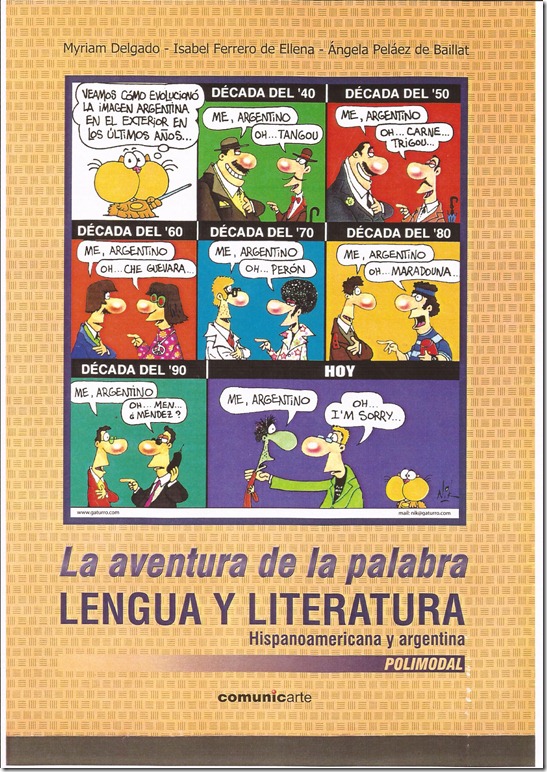 That it was even considered appropriate material for the front of a book designed for mass use by Argentinean teenagers says quite a lot about national self perception.  Talking with a friend the other day Martin suggested that refusing to allow British cruise ships to dock in Argentinean ports, apart from cutting off ones nose to spite ones face, might not exactly enhance Argentina’s standing in the international community, to which the response was “That doesn’t matter, we’re already a global joke…”

Which is interesting.  Consider the following: The country of Argentina is only 200 years old, a mere blink on the time scale of many other nation states.  Of those 200 years, most of the first 60 were characterised by civil war.  Thereafter, most of the 20th century was characterised by military coups and fascist dictatorships.  In fact 1989 was a landmark in Argentina’s history when one democratically elected president, Alfonsin, handed over peacefully to another democratically elected president, Carlos Menem.  All of which makes it all the more impressive that merely a couple of decades on, Argentina has one of the fastest growing economies in the world, and standards of living have risen exponentially even in the few years that we have been here.  Yes, the corruption makes us weep, and the bureaucracy makes our eyes water, but global joke Argentina certainly is not.  So I have yet to understand from where the negative perception originates, why depression appears to be a national sport, and even worse, why it could possibly be a good idea to instil this gloomy self-image into the developing psyches of the nations school-children.