Out of focus and bemused

Questions that I have never previously been asked by a passport-office; “Can he write his name?”  “Can you get up in the morning?”

Joni’s baby Argentinean passport runs out in November so I went to the civil registry to see about another one.  “Can he write his name?”  “Er, not really, he runs out of A4 paper after the first few letters…”  “Right, then we have to do this before he’s five because he has to be able to sign his own passport when he’s five.  Can you get up in the morning?”  “Er yes….” “Good, be here at seven tomorrow then.”

Maria isn’t her name, but it’s how we know her as it’s the first name she gave us.  And she isn’t so much a “problem” as a conundrum.  My itinerant friend reappeared this morning and our peaceful if not entirely productive post-passport-office mud-pie making session out on the patio suddenly became a confetti chase around town.  We went to her current bedsit, followed by two queues in the benefits office, followed by the bank.  The benefits office insists that there’s a pension in her name that has been drawn since 2007.  She insists she isn’t drawing it.  The bank insists that the money is being drawn out of her account with her bank-card from the cash-machine.  She insists that it isn’t her, although she has the bank card in her possession but claims not to know how to use it.  I would decide not to believe her, except that the benefit office also volunteered the information that she has been going in there every month for the last while to ask when her pension will be paid, which I can’t see why she would do that unless she really isn’t being paid it.  So, is this an elaborate hoax, or is she telling the truth, or is something very strange going on that I have no idea about?  What I do know is that if she were middle class and articulate, both the benefits office and the bank would be at least a little bit interested in finding out, but because she’s poor and confusing, they assume she’s lying through her teeth and they have washed their hands of her.  She knows that the jury’s still out as far as my believing her is concerned, but I am also morally driven to act as though she might be telling the truth at least until I’m convinced otherwise.  So where to go next?

How do you hold a moonbeam? 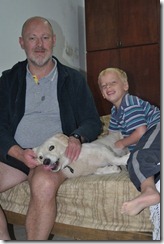 Shrek was a strange creature of uncertain parentage.  The neighbourhood kids had aptly named him, for although he wasn’t large or green, he was definitely a species all on his own.  We identified shark, cockroach, anteater, and alien somewhere in his genetic make-up.  He came to live with us when his previous owners threw him out and he took to sleeping on our door-step, until we relented and started feeding him.  Dog-ownership is a fluid thing in Argentina, there are many street-dogs, and many of those are “owned” in the sense that someone feeds them, maybe takes them in at night, maybe does their inoculations, and maybe pays their vets bills.  A collar claims ownership of “your” dog.  So Shrek became ours, although he regularly lost his collar.  He knew where his food was, and he always came in at night eventually (although sometimes not until the wee small hours).  He liked home comforts, he would sneak onto a bed or the sofa anytime he thought no-one was looking.  He loved to play; chasing madly after birds and guinea pigs, or fishing for stones in the drainage ditch, or running after a ball with Joni (we got through many plastic footballs courtesy of his sharp front teeth).  He was clear he was top dog in the neighbourhood, often coming home with bloody ears from defending his turf, and he once spent three days hiding under our bed having misjudged the pit-bull that used to live next-door.  You can take the dog off the street, but you can’t take the street out of the dog, and today he died as he had always lived; chasing after the traffic.  Joni and I said a little prayer tonight to ask God to look after him for us.  Stuff theology.