One of the things that surprises me for a few days every time we go back to the UK is that you can open a tap and hot water comes out.  Just like that.  So, uncluttered by notions of health and safety, we have taken ownership of this new shower unit, affectionately known as a widow maker: 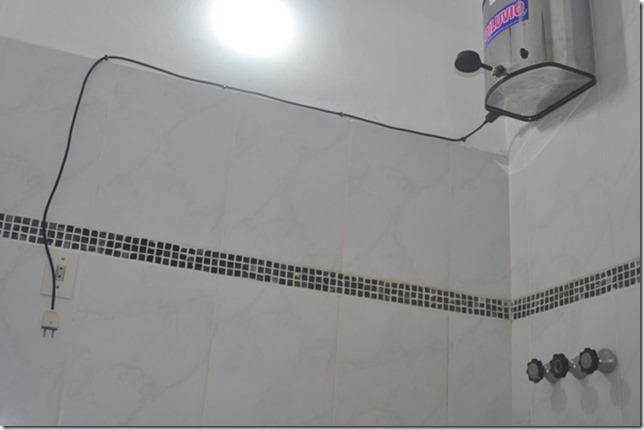 Note the trailing flex, loosely stapled to the wall above the tiles, dangling across the plug socket, with the bath just a few inches below. The shower unit itself has an old fashioned kettle filament inside to heat the water.  Fill it up, plug it in, walk away, come back twenty minutes later, unplug (forgetting that bit is likely to render your partner a widow/er), hope it’s not too hot or you’ll have to go away again until it cools down, shower.  Done.

Your perspective on this will probably depend on your context.  The clipboard wielding health and safety guys would have it down in a jiffy.  At another extreme, the 750 million people in the world who don’t have clean water to drink would be scandalised that we’re using it to wash in.  Our take is that having survived the last few winters without hot water in the house, we think we’re going up in the world.