For those of you who live in the northern hemisphere, just imagine for a moment what would happen if you combine the manic winter weeks leading up to Christmas, with the manic summer weeks leading up to the end of the academic year.  Now you have some idea of what December looks like in Argentina.  Tis  the season where mental health services burst at the seams, and not because Cameron’s Government has closed the beds.

This is a summary of the last week:

Kicking off the end of year events we had the swimming club’s annual display: 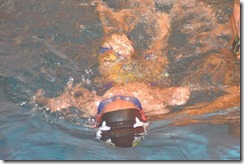 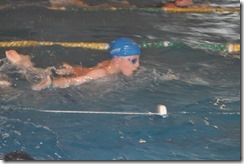 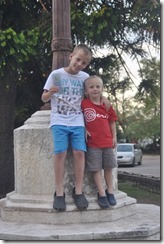 Next, Danny’s school year performed their end of term production. “Murga” is a traditional Argentinean style of music and dancing.  It is a lot of fun and quite raucous – about right for Danny, and he loved his hat: 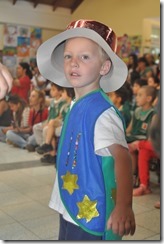 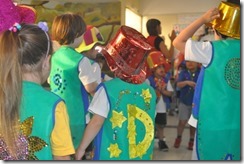 Then Danny’s little music club held their concert in a local club hall.  Danny was an enthusiastic performer on his wood blocks: 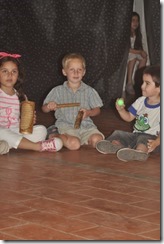 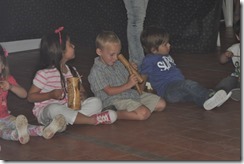 The following day, Joni was away overnight on his end of year cycling camp, the first time he has ever been on a camp without me as Scout leader: 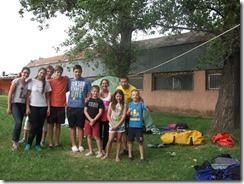 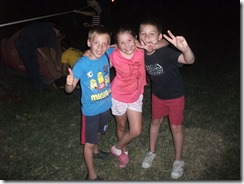 Simultaneously Danny and I were off running the end of year “Pan con Leche” kids’ club event; silly games in a plaza followed by a pizza making competition:

That took us to the weekend, which was filled with Scout activities.  On Saturday we marched four miles to meet with the other groups for the district end of year camp fire.  Each group had to bring a banner with a theme of Peace: 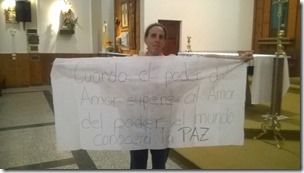 “When the power of love is greater than the love of power, then the world will know peace”

On Sunday the leaders had a meeting with the newly installed Bishop-  That was an interesting experience for me, being the only non-Catholic leader in the region.  The overarching assumption was to talk about Scouts as inherently Catholic, although one person did mention that this wasn’t necessarily the case!  Then we went for mass together afterwards, always a nice change for me, I’m starting to get to grips with the liturgy in Spanish, can do the Lords Prayer, now trying to learn the creed.

On Monday we had visitors from Cordoba, a previous foster family of the Teen, who have recently adopted a two year old with significant disabilities and medical needs.  They came for lunch, for which I made a lot of pizza, and then took Teen out for the afternoon.  In the evening I was representing the Scouts as a witness to the handover and swearing in ceremony for the new city mayor and councillors.  It was interesting from a cultural/phenomenological point of view, I’m fairly sure I was the only foreigner but we’ve been around long enough now to bump into a variety of friends and acquaintances. 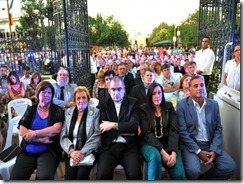 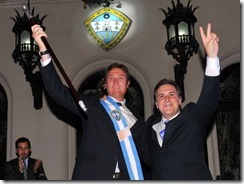 Today is a bank holiday for the 8th of December and the first day for ages when we haven’t had any commitments.  In line with Argentinean 8th of December tradition, the boys and I put up our Christmas tree and nativity this morning: 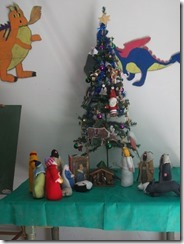 Santa was swiftly borrowed from the tree and set off on a round of the train track.  Shortly afterwards I found myself cutting out a net of a 2 cm cube having been informed that Santa needed a present to take on the train with him.  And shortly after that, I found myself being detailed to sew up a miniature red draw-string bag for Santa to keep his presents in: 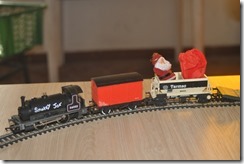 And that’s December a mere eight days in.  Possibly plans for this afternoon include setting up the paddling pool.  Or finding a cool cave to go to sleep in for the next month.