Been trying to find time to post this all week.

These are photos from our trip to Santiago del Estero last weekend.  The project is called Am Tena, which I think is a phrase in Wichi, although I might be wrong about that, because the indigenous people in Santiago del Estero speak Quechua; I have lots of things still to find out!  We were in the Añatuya area of the province, which appears to be mostly desert.  We visited a couple of schools in the district, dropping off books and other material, then we went to the village of Atamisqui, which turns out to be the Am Tena project’s main operating base.  Outside the village itself the land is divided up between several indigenous families, and it was out here in the scrub that we spent most of the weekend. 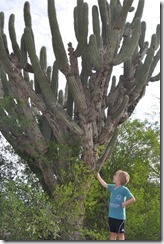 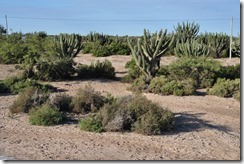 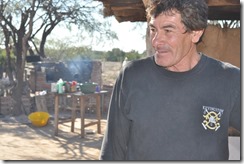 The men busied themselves with big boys’ toys, putting up shelving in  the library which the community has been building this year.  The women mostly served mate and talked; I can’t quite figure out if I should identify a job in order to make myself more useful next time, or if I need to learn that sitting around drinking mate for a weekend actually counts as being useful in some parts of the world.  Maybe some of both. 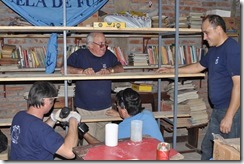 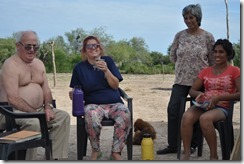 The kids busied themselves with being kids, very much enjoying the big space, complete with goats and pigs to chase.  Joni was interested to find out that the indigenous children are also bilingual; speaking Quechua at home and Spanish at school.  He is used to being the only one who has more than one language, San Francisco not exactly representing a cosmopolitan metropolis.  And language or no language, one cardboard box is all that is needed for three small children of any culture to enjoy a good afternoon together; 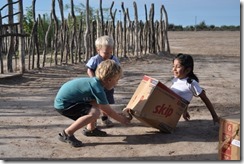 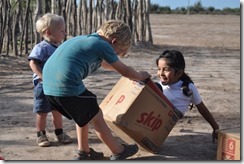 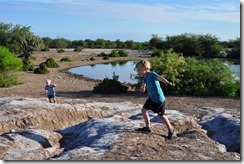 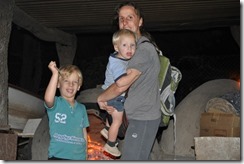